Right to the City

Right to the City is associated with the Freedom Road Socialist Organization. It emerged in 2007 as a unified response to gentrification and a call to halt the displacement of low-income people, people of color, marginalized LGBTQ communities, and youths of color from their historic urban neighborhoods. We are a national alliance of racial, economic and environmental justice organizations.

Through shared principles and a common frame and theory of change, RTTC is building a national movement for racial justice, urban justice, human rights, and democracy.

RTTC seeks to create regional and national impacts in the fields of housing, human rights, urban land, community development, civic engagement, criminal justice, environmental justice, and more. Right to the City was born out of desire and need by organizers and allies around the country to have a stronger movement for urban justice. But it was also born out of the power of an idea of a new kind of urban politics that asserts that everyone, particularly the disenfranchised, not only has a right to the city, but as inhabitants, have a right to shape it, design it, and operationalize an urban human rights agenda.

As of October 2008, Right to the City includes more than forty member organizations and resource allies in seven states and more than a dozen local jurisdictions. Members are organized in regional Right to the City networks, which currently include: Boston/Providence, DC/Northern Virginia, Los Angeles, Miami, New Orleans, New York, and San Francisco/Oakland.

Gilda Haas, Gihan Perera and Jon Liss, conceived of the Right to the City Alliance.[3]

Right to the City support for Martin Walsh

According to Mel King there’s an additional factor that figured significantly in Martin Walsh’s successful mayoralty campaign in 2013.

A group called Right to the City, composed of various organizations working on access to affordable housing, good jobs, quality education, and sustainable community development, seeks to enable a cross section of racial, ethnic, and income groups to remain and participate in all aspects of Boston.

The group’s members, a new rainbow coalition, are in the forefront of such issues as foreclosure blockades to protect people’s homes, stopping no-fault tenant evictions, and fighting alongside unions for construction jobs.

Following its questionnaire to both mayoral candidates, the group felt Walsh was more responsive to its concerns. Having encouraged these young adults to do this analysis, Mel King joined with them. At our endorsement announcement, I admired their commitment to looking forward and not wallowing in the past.

They saw a candidate who willingly shared parts of his life that indicated he has the capacity for change. He invited them to work with him to make a difference for all the city’s residents.

Both at the endorsement event, when a high school student spoke, and at Fields Corner, where a diverse group rallied, I saw evidence of ways Walsh’s campaign included people. A personal highlight was watching the candidate join in singing a song I wrote: “We are in harmony; once to every generation comes the chance to change the world.”[4],

In 2011 Alicia Garza, Chairperson of the Right to the City National Alliance (RTTC) Steering Committee.[5]

Anita Sinha serves on RTTC's Executive Committee as Archivist, and is a Senior Attorney at Advancement Project.[6]

Circa 2014, Dawn Phillips is Chair of the Steering Committee of the Right to the City Alliance.[7]

The Right to the City national staff went through some changes in 2011, and has come out strong. The Alliance was very fortunate to hire an experienced and dynamic organizer, Rachel LaForest, as its new Director of Organizing, while it said farewell to its dedicated Lead Organizer, Marisa Franco. Lisette Le joined RTTC as the new Regional Organizer for Boston. Avi Rosenthal is came on board as the New York City Regional Coordinator and we said goodbye to New York City Organizer Shannon Barber. RTTC bade a fond farewell to Carl Lipscombe, and welcomed Mark Swier as the new Operations Coordinator. Claire Tran remains as our now-veteran RTTC staffer, leading the way as National Organizer for Civic Engagement.[11]

Right to the City Regional Contacts 2014. 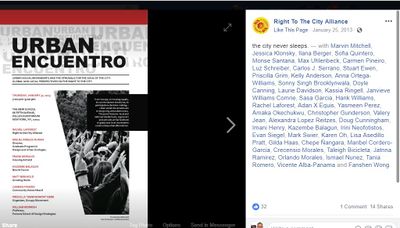