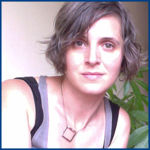 "I grew up in Buffalo, New York," Harmony Goldberg recounts[1]"My mom was once a Catholic nun; Dad was Jewish. Mom taught at Attica after the uprising. I was radicalized by my parents' political orientation."

"I got a full scholarship to UC Berkeley in 1993. Racism was on the offensive," she says. "When the regents started eliminating affirmative action, I felt personally responsible; here I was, a white woman on a full scholarship, while others were shut out. It felt like an historical moment; I decided to do social justice work."

Goldberg and fellow student Rona Fernandez founded SOUL in 1996 to train young people of color in "get out the vote" work against Prop. 209.

"We had correct information, but it didn't matter," Goldberg remembers. "I became revolutionized through the course of my experience of trying to change things electorally, trying to change embedded racism. I concluded that to build power we needed to liberate our own people, instead of trying to convince people in power to do it.

"We studied the Third World movements of the 1960s and 1970s, here and abroad: South Africa, Cuba, China, Chile. We studied the [revolutionary] classics, the histories. We decided to commit to an organizing method, not just direct action or ideological organizing."

The women made SOUL a political education center, as distinct from a political party or an issue advocacy group... Goldberg distances herself from the traditional leftist labels of Marxist, Leninist, Maoist, and Trotskyist while acknowledging an affinity for socialism: "I am not an 'ist,' merely a revolutionary, with identity as a socialist."

Goldberg's politics are heavily influenced by Antonio Gramsci... she also admires Rosa Luxemburg, a communist martyred by German soldiers in 1919, who was highly critical of the Russian Communist Party's "dictatorship of the party, not the workers."

The Summer Of Unity and Liberation (SOUL)[2]grew out of the 1995 student movement at the University of California-Berkeley to support affirmative action. Modeled after the 1964 Mississippi Freedom Summer Project of the Student Non-Violent Coordinating Committee (SNCC), SOUL was founded by four Fernandez, Goldberg, Tho Vinh Banh and Amanda Enoch--who were also directly involved in the Berkeley campus organizing. They agreed there was a need to create a program that would address the challenges within multiracial coalitions that organize for social change as well as develop links between college campuses and community organizing. 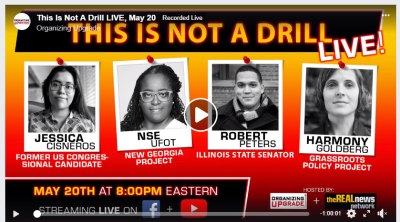 Jessica Cisneros, Nse Ufot, Robert Peters, and Harmony Goldberg in conversation about how to engage the Dem Party after Bernie, whether the Dems are in crisis, and how best to beat the right.

In 1998 the Center for Political Education in San Francisco held[3]a panel discussion "Where are White Activists in the Fight Against Racism?" Panellists were Harmony Goldberg, SOUL-on the Mumia Abu-Jamal Campaign, Jo Hirschman, Police Watch-on Police Brutality, Adam Gold, C-Beyond on organizing in the suburbs. It was facilitated by Ilana Berger, POWER.

In 1999, a panel discussion entitled "Where are White Activists in the Fight Against Racism?" was composed of speakers Harmony Goldberg, SOUL; who spoke on the Mumia Abu-Jamal Campaign; Jo Hirschman of Police Watch who spoke on Police Brutality; and Adam Gold, of C-Beyond who spoke on organizing in the suburbs. These talks were facilitated by Ilana Berger, of POWER who gave a talk entitled "The Early Marxist View on Housing: How Relevant is it Today?" at this meeting. The talks were sponsored by the Committees of Correspondence for Democracy and Socialism linked organization, the Center for Political Education.[4]

In 2005 Harmony Goldberg and Raquel Lavina gave talks entitled: "Reclaiming Revolution: Evaluating the Experience of Standing Together to Organize a Revolutionary Movement (STORM)", these talks reviewed lessons learned from the organization STORM, a revolutionary organization in the Bay Area in the 90s. The talks were held at the San Francisco based Center for Political Education.[4]

In the early 2000s Lateefah Simon served on the Board of Directors[5]of the Oakland based Youth Empowerment Center. 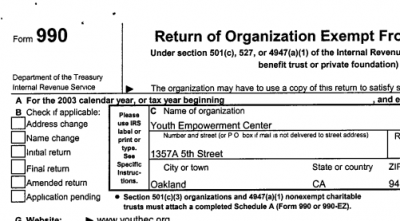 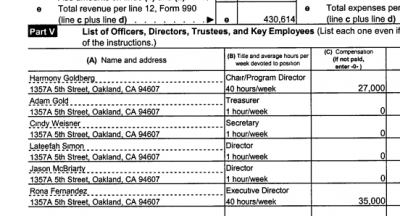 Jews for a Free Palestine

August, 2002: as member of Jews for a Free Palestine visited Nablus, Bethlehem, Ramallah, and Gaza.

On Nov 18 2004 Harmony Goldberg lectured at the Sacramento Marxist School on Reclaiming Revolution.[6]

In 2005 San Francisco's Center for Political Education hosted a forum[7]"Reclaiming Revolution: Evaluating the Experience of Standing Together to Organize a Revolutionary Movement (STORM)" with former STORM members Harmony Goldberg and Raquel Lavina.

A look at lessons learned from the organization STORM, a revolutionary organization in the Bay Area in the 90s.

Opposing the "War on Terror"

In the immediate aftermath of 9/11 supporters[8]of STORM and the Bay Area Committees of Correspondence for Democracy and Socialism established Ad Hoc Committee 'On Poitical Strategy' to fight against Bush's war against terrorism.

The group issued an October 5, 2001 statement to other activists;

As we immersed ourselves in the fightback to Bush's war against terrorism, we felt the need to get our political bearings as leftists. So we organized a discussion attended by 27 diverse left activists in the San Francisco Bay Area on Sept. 30.

September 11, and the Bush administration's reaction to it, is a defining historical moment, ushering in a new and dangerous period in international politics. Washington's agenda is to entrench the national security state and a new level of international dominance on the basis of a permanent war on terrorism--bringing the "new world order" to fruition.

The defining political axis of this new period is Washington's international war on terrorism--and the fight against it...The political and ideological balance of forces, demands, and outcomes of all struggles will be affected by this central issue, to one degree or another.

Given this, the fight for peace should be the central demand for the people's movements...However, peace is not a centrist, liberal demand, but in fact is central to an anti-imperialist agenda. Its main content is that of staying the hand of imperialist war and fighting U.S. militarism in all its forms.

The anti-communist screed launched by Glenn Beck forced forced Van Jones to resign as advisor to President Obama. While Beck’s media maelstrom is reminiscent of the 1950s “Red Scare,” it also reveals the deep fissures in American society. The country is facing off in terms of race and class, with Obama playing the Janus head to both the progressive forces that put him in office and a reinvigorated right.

In the background is the very real possibly (and dare say, hope) of a rising radical force that can push Obama to the left and reshape domestic and foreign policy.

Tonight’s activist panel looks at the ways in which the Van Jones effect opens up crucial questions to radical left forces How do radical left forces interact and relate to this administration? How do we push on critical issues like health care? How did the right wing capture momentum? How does the left get its groove back?[10]

Left Strategy from the Grassroots:

The US Social Forum and US Social Movements: The Road from Atlanta to Detroit 2010:

In 2009 Harmony Goldberg was "Resource Ally" of the Right to the City Alliance and a supporter of the National Domestic Workers Alliance. Goldberg is also a PhD student in Cultural Anthropology at the CUNY Graduate Center, and she provides political education support for grassroots organizations around the country.[11]

Right to the City

Right to the City is associated with the Freedom Road Socialist Organization. In 2015 Harmony Goldberg, CUNY Graduate Center, was listed as an "ally" on the organization's website.[13]

The Left We Want to Build: Breaking Out of the Margins

In June 2017, Harmony Goldberg signed the letter The Left We Want to Build: Breaking Out of the Margins.

Thanks to Harmony Goldberg for organizing this great discussion at The People's Summit of the Long Term Agenda which People's Action inherited from NPA (and which we're redoing), The Movement for Black Lives platform, the Freedom Cities platform, and the LEAP Manifesto. 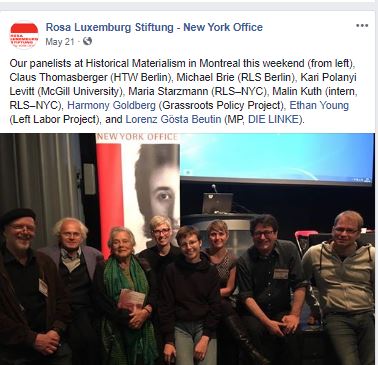 We urge all left-progressive forces to take seriously what will be required to create a united progressive front capable of defeating Biden and going on to expand its influence even as we unite in an even broader coalition to defeat Trump. And to remember that we not only need cooperation on the electoral battlefront, but cooperation at scale in building mass direct action, revitalizing the trade union movement, and organizing large numbers on a host of urgent issues. After all, even if Sanders or Warren wins the presidency and the GOP loses control of both houses of Congress, it will take massive pressure from below to win a Green New Deal, Medicare for All, end mass incarceration, close the border concentration camps, change US foreign policy and begin the new cycle of progressive advance that is an existential imperative for the world’s most vulnerable and the entire human race.

We have to quickly establish sufficient political unity to uphold a progressive front, so that we may develop the technical capacities and infrastructure to allow this progressive front to work together (regardless of whether they have endorsed Sanders or Warren). Though preserving space for constructive debate over left electoral strategy and tactics will be critical, we urge doing so in a way that does not detract from the important task of reaching outward, engaging the unconvinced and unorganized social forces we will need to win.

To that end, Organizing Upgrade will be publishing a number of pieces in the coming week from left organizers of varied perspectives that discuss the WFP endorsement, the DSA’s “Bernie or Bust” resolution, and other developments related to the 2020 elections. Our goal is to continue engaging left organizers in strategic dialogue during a pivotal moment in history and we welcome you to join the conversation. The stakes could not be higher.

The conference will be streamed from Chicago to regional meetings in New Haven, Los Angeles, and Orlando. Whether you’re on the East Coast, West Coast, in the MIdwest or the South, you’ll be able to participate.[19]