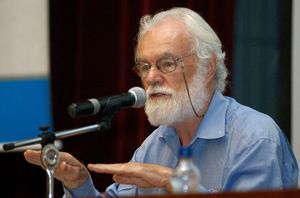 David Harvey (born 31 October 1935, Gillingham, Kent, England) is the Distinguished Professor of Anthropology at the Graduate Center of the City University of New York (CUNY). A leading social theorist of international standing, he received his PhD in Geography from University of Cambridge in 1961. 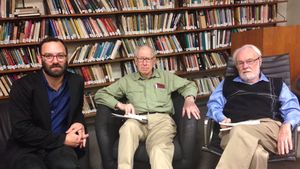 David Madden, Peter Marcuse, and David Harvey at the New York launch of "In Defense of Housing" in 2016

Patrick Bond worked with several social justice agencies in Washington and Philadelphia during the 1980s. He then enrolled in a doctoral program, supervised by David Harvey,at the Johns Hopkins University Department of Geography and Environmental Engineering where he received his Ph.D. in 1993 ("Finance and uneven development in Zimbabwe").

The Democratic Socialists of America sponsored 1997 Socialist Scholars Conference was held March 28- 30 at the Borough of Manhattan Community College in New York[1].

The Right in these Times

David Harvey addressed the The Right in these Times: Understanding and Combating Contemporary Shifts to the Right, the Second Annual Conference On “Rightist Movements” Friday, May 1, 2009, The Graduate Center, City University of New York 365 Fifth Avenue.

The Right in these Times

The Right to the City:

"How to Organize a City"

How can urban social movements cohere with existing institutions of power, from unions to local government? As importantly, how can movements collaborate with each other to achieve broader, systemic changes? Can these movements and political projects realistically be anti-capitalist? Activists and leaders Bill Fletcher, Jon Liss, and Gihan Perera will discuss these issues in an open forum.

Moderated by David Harvey, Director of the Center for Place, Culture and Politics.[5]