Niebyl-Proctor Marxist Library is a Marxist library in Oakland, California. It's vision is to help "working-class people understand and create our role in history by maintaining and building an accessible library and archive, by organizing classes and discussions, and by providing community space and resources to promote culture and critical thinking. "We are inclusive, independent, non-sectarian, anticapitalist, and committed to struggle against racism and sexism."[1]

"Karl Niebyl (1906-1985) was a noted Marxist economist and scholar who came to the United States in 1934, after escaping from Nazi Germany. An economist with the New Deal during Franklin Roosevelt’s second term, he later taught at Tulane University in New Orleans, before joining the Navy as a Seabee in World War II.

"Buffeted from one teaching position to another during the anticommunist hysteria of the McCarthy era, Niebyl taught at Temple University and several other colleges before becoming a full professor at San Jose State University in the early 1970s.

"When Niebyl left his extensive library of books, pamphlets and papers to be made available to the public, he asked that his collection be named for his wife, Elizabeth Hale Niebyl, who was a leader in public housing during the New Deal.

"Niebyl’s collection, and that of labor and community organizer Roscoe Proctor, formed the core of the collection which became the Niebyl-Proctor Marxist Library for Social Research."

"Roscoe Proctor was born in Texas, where he worked as a youth as a farm laborer. Moving to California in the 1940s, he joined the International Longshore and Warehouse Union (ILWU), and worked for decades on the docks and in warehouses.Roscoe Proctor

"A longtime Oakland resident, he was active in the community as well as in union affairs, helping build movements that resulted in the hiring of the city’s first black bus drivers and smashing racial barriers in its public accommodations. He helped build tenants’ organizations and led rent strikes, and helped start the very first chapter of the National Welfare Rights Organization.

"Proctor also helped inaugurate Youth for Jobs, which brought together black youth in Oakland and south Berkeley and turned an unused fire house into a center for job training and getting jobs. He mentored many youth in the community, encouraging them to read, to discuss and to be active on issues of the day.

"Proctor was a member of the Communist Party USA’s Political Committee, and served as Secretary of its Trade Union Department." 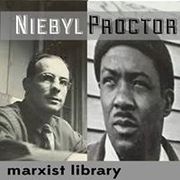 The Niebyl-Proctor Marxist Library helps working-class people understand and create our role in history by maintaining and building an accessible library and archive, by organizing classes and discussions, and by providing community space and resources to promote culture and critical thinking. We are inclusive, independent, non-sectarian, anticapitalist, and committed to struggle against racism and sexism[3].

In 2007 the Niebyl-Proctor Marxist Library will be financially secure and will have the resources to maintain and expand its collection. The library will be a thriving educational center for a community of 1000 or more active participants, will be regarded as an expert resource on Marxism, and will continue to reflect our values and mission[4].

Sunday Mar 24th, 2013, presentations by Gene Ruyle, Emeritus Professor of Anthropology, CSU, Long Beach, and Paul Liem, Korea Policy Institute, were given on the topic of "Socialism in North Korea?" at the Niebyl-Proctor Marxist Library in Oakland.[6]

Del Berg: a celebration of his life. Hosted by Niebyl-Proctor Marxist Library 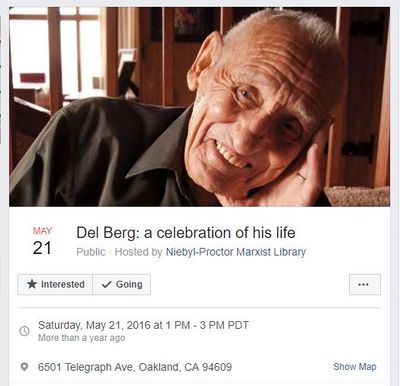