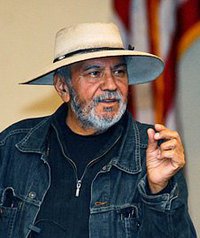 Al Rojas was formerly a farmworker, and UFW labor organizer from 1961 to 1979, coordinator for the Pittsburgh Grape Boycott from 1968-1970, SEIU Local 1000 labor leader and former California State Deputy Labor Commissioner. He is currently vice-president of the Sacramento Labor Council for Latin American Advancement chapter.[1]

In 1994 he was a member of the DSA National Political Committee and a co-chair of the DSA Latino Commission. He was president of North Americans for Democracy in Mexico.[2]

For Duane Campbell, for Al Rojas, Dolores Delgado Campbell and others in the Democratic Socialists of America Latino Commission , the Cesar Chavez's United Farm Workers was a school for organizing.[3]

Like hundreds of activists in labor and community organizations today, we were trained in the union. This cadre of organizers is the UFW's second legacy.

In 1994, Al Rojas of Sacramento, California was a member of the Democratic Socialists of America Steering Committee.[4]

Open letter to the Davis Chamber of Commerce

The following is an open letter to the Davis Chamber of Commerce: circa 2018.

We, the undersigned community members, are writing to you because we are deeply concerned by your decision to honor Davis Police Chief Darren Pytel as “Partner of the Year” at your upcoming 113th annual Installation Gala on Jan. 20, and we urge you to revoke this award immediately.

Regardless of your motives, bestowing a special honor on the chief of police at this particular moment demonstrates at best an ignorance of recent events and at worst contempt for those who are currently working to bring about positive change in our community.