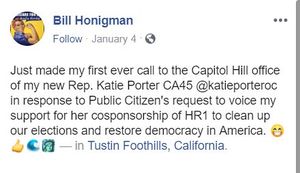 Just made my first ever call to the Capitol Hill office of my new Rep. Katie Porter CA45 @katieporteroc in response to Public Citizen's request to voice my support for her cosponsorship of HR1 to clean up our elections and restore democracy in America. 😁👍🌊🗽 — in Tustin Foothills, California.

Made add for Porter

Proud to be a part of making this very positive ad for my next Representative to Congress Katie Porter CA45, advocate for we the people and #MedicareForAll #Medicare4All #mfa #m4a. Onward to #Flip45 #FlipTheHouse !!! — feeling motivated.

Campaigning for Katie and Harley

With candidate for Congress Katie Porter CA45 and this group of amazing advocates for #HealthcareJustice last week, proving all politics is local and job #1 in politics is showing up. Onward!! #MedicareForAll #Medicare4All #mfa #m4a — with Michael Getto, Amanda Cotylo, Amy Wiwuga, Susan Meyer and Bryan Fazio in Aliso Viejo, California.

Packed house for Unity Party at Democrats of Greater Irvine in support of candidate for Congress Katie Porter CA45, and #HealthcareNotWarfare #WindmillsNotWeapons #EducationNotIncarceration and #CorporationsAreNotPeople — feeling motivated with Iyad Afalqa.

Physicians for a National Health Program

Attending Physicians for a National Health Program PNHP Calif conference to discuss next steps for #SinglePayer enhanced and improved #Medicare4All here with the continued fight to push CA #SB562 the #HealthyCA Act through our legislature, and national #HR676. Onward to #HealthcareJustice — feeling motivated at Hyatt Regency Los Angeles International Airport.[1]

Progressive Democrats of America staffers Dr. Bill Honigman and Dan O'Neal along with fellow PDA members and scores Single-Payer activists from around the country met September 17, in Las Vegas for the annual Healthcare Now convention.

One of the most stirring talks was Las Vegas activists Amy Vilela who told the heart wrenching story of losing her daughter due to not having healthcare Insurance. Amy is now running for Congress on a strong progressive platform in NV CD- 3.[3]

With my peeps, the CA Bernie delegates, a beehive of heart and soul. I love you all.  :-) — with Henry Huerta, Marcia Martin, Zenaida Huerta, Samila Amany, Gilbert Cedillo, Jose Navarrete, Iyad Afalqa and Angelica Duenas.

It's time to make sure all Americans have the health care services and medications we need and deserve!!!

I love every single one of you. Seeing this group come together and really get off the ground is honestly thee biggest accomplishment of my life. Thank you Russell Allin Baldwin for reaching out to me after #Bernie2016 to start the next stage of the political revolution. And thank you so so much to Socrates Cruz, Ken Warfield, Margot Tenenbaum (Emma) & Stahsha Kay for making our leadership team complete. And a super special shout out to Jaci Lyn Iannello for totally rising to the occasion in becoming not only our lead organizer, but truly the new leader of Our Revolution SoCal OC. 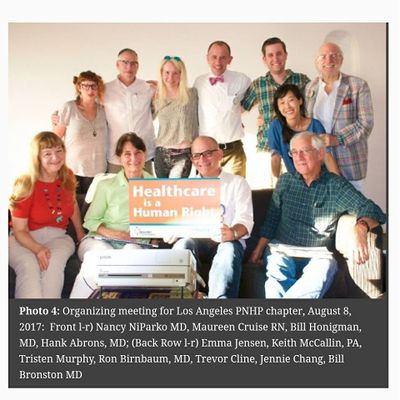