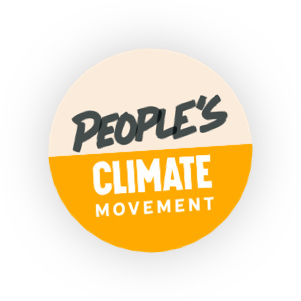 People's Climate March (also known as the People's Climate Movement) was first held in 2014, scheduled ahead of the United Nations summit on climate change that took place in New York City "to discuss an international carbon-emissions agreement."[1]

Speakers included[3] Keith Ellison, Bernie Sanders, Chuck Schumer and many others (see below).

According to Time Magazine, the People's Climate March was "coalesced by several organizations, including Bill McKibben’s 350.org...“Today, civil society acted at a scale that outdid even our own wildest expectations,” said May Boeve, executive director of 350.org...[4]

According to the New York Times, Ricken Patel, executive director of Avaaz, was one of the "key organizers" of the 2014 march, which reportedly boasted over 311,000 protesters globally.[5]

The following is the invitation copied verbatim from the People's Climate March website:

"This is an invitation to change everything.

"On September 23, world leaders are coming to New York City for a historic summit on climate change. This is an opportunity to inspire the world’s most powerful politicians to ambitious action on the climate crisis.

"With our future on the line and the world watching, the People’s Climate March will meet this moment with unprecedented mobilizations in New York City and around the globe.

"From New York to Paris and Delhi to Australia, we’ll take to the streets to demand the world we know is within our reach: a world with an economy that works for people and the planet; a world safe from the ravages of climate change; a world with good jobs, clean air and water, and healthy communities.

"There is only one ingredient required: to change everything, we need everyone. Join us.

"NEW YORK — Today, the world marched for climate action. From Manhattan to Melbourne, more than half a million people took to the streets in a unified global move to demand ambitious commitments from world leaders in tackling the climate crisis.

"At 3:00pm, march organizers released an initial count of 310,000 people based on the crowd density along the march route, which stretched across Manhattan from 93rd Street and Central Park West to 34th Street and 11th Avenue. But as the day continued, reports came in of tens of thousands more protesters marching outside the official route, streaming down avenues in midtown Manhattan. At 5:00pm, march organizers had to send out a text asking marchers to disperse from the march route because the crowds had swelled beyond the route’s capacity.

"“We said it would take everyone to change everything — and everyone showed up,” said Eddie Bautista, Executive Director of the New York City Environmental Justice Alliance.

"The New York march was led by indigenous and frontline communities who came from across the globe to highlight the disproportionate impact of climate change–from communities hit hardest by Superstorm Sandy to people living in the shadow of coal-fired power plants and oil refineries to those living in Island Nations already faced with evacuating their homes.

"“The frontlines of the climate crisis are low-income people, communities of color and indigenous communities here in the US and around the globe. We are the hardest hit by both climate disruption––the storms, floods and droughts––as well as by the extractive, polluting and wasteful industries causing global warming,” said Cindy Wiesner, Co-Director of The Climate Justice Alliance. “We are also at the forefront of innovative community-led solutions that ensure a just transition off fossil fuels, and that support an economy good for both people and the planet.”

"Once an issue seen as dividing environmentalists and labor, today’s march was also notable for the number of unions that joined the climate fight. Nearly every labor union in New York helped organize turnout for the march, including SEIU, the largest union in the city and the second largest in the country.

"“Our members are marching because climate change affects all of us,” said Hector Figueroa, president of 32BJ SEIU. “We live in the communities that get destroyed by storms like Sandy. We work in the buildings that get flooded. We get hit by health epidemics like asthma that are rampant in our communities, and we care about the world that we will leave for our children and grandchildren.”

"“Today, civil society acted at a scale that outdid even our own wildest expectations. Tomorrow, we expect our political leaders to do the same,” said May Boeve, Executive Director of 350.org.

"The global day of climate action comes just two days before a UN Climate Summit, which is hosted by UN Secretary General, Ban Ki-moon, and attended by more than 125 world leaders, including US President Barack Obama, French President Francois Hollande, South Korean President Park Geun-hye, and UK Prime Minister David Cameron. The summit is intended to kickstart a process that will end with significant agreement at next December’s global negotiations in Paris.

"The organizing for The People’s Climate March required the coming together of 1574 groups in an effort akin to electoral campaigns. Just in the last week, 1,000,000 flyers were handed out across New York City. A total of 550 buses from nearly all 50 states flooded into Manhattan as well as two dedicated trains, one from DC and one from California. For the last month, 1 out of every 10 subway cars in the city also ran ads for the march.

"All Aboard! Senators join with CT Roundtable on Climate and Jobs to Encourage Participation in Upcoming March in New York City and to Announce Collaboration with Metro-North

"New Haven, CT — The Connecticut Roundtable on Climate and Jobs will hold a press conference at Union Station in New Haven (at 2:00pm on September 2, 2014) to highlight the participation of Connecticut’s labor and religious communities in the People’s Climate March (www.2014.peoplesclimate.org) on September 21 in New York City.

"U.S. Senators Chris Murphy and Richard Blumenthal will join representatives of CT labor organizations that have endorsed the march – including Lori Pelletier, Executive Secretary of the CT AFL-CIO – and prominent religious leaders – including the Rt. Rev. Ian Douglas, Bishop Diocesan of the Episcopal Diocese of CT.

"With more than a dozen endorsing unions and labor organizations, Connecticut will have one of the strongest labor contingents at the march, exposing the false framing of “jobs vs. the environment.”

"Both Senators helped advocate with Metro-North, along with Congresswoman Rosa DeLauro and Governor Dannel Malloy’s office. DOT Commissioner James Redeker succeeded in brokering an agreement with Metro-North for discounted fares and enhanced capacity to ensure that large numbers of CT residents can get to the march by purchasing seats through the coalition at www.CTClimateTrain.org.

"The coalition will thank Metro-North for its collaboration and highlight the critical role of mass transit in a green jobs economy.

"CT State Council of Machinists President John Harrity serves on the Steering Committee for the Roundtable. “Here in Connecticut, Labor is working together with our allies in religious communities and environmental groups to build a sustainable, renewable energy future, creating jobs while protecting the climate,” says Harrity. “Climate change is the most important issue facing all of us for the rest of our lives. When our kids, and grandkids, ask ‘What did you do to help stop this disaster?’ which they will surely ask if we do not take drastic steps immediately – Machinists Union activists can say, ‘We helped save the world. We were there on September 21.’”

Participants in the press conference will include:

These CT labor organizations have endorsed the march, as of 8/30/14:

Launched in June 2012, the Connecticut Roundtable on Climate and Jobs is an innovative partnership between the Interreligious Eco-Justice Network (IREJN) and the CT AFL-CIO that seeks to strengthen collaboration among Connecticut’s labor, environmental, and religious groups in advocating for public policies that address urgent concerns about climate change while creating good-paying jobs right here in our state.

According to their website:[10] "The People's Climate March is being organized by an ever-growing coalition that comprises more than 1,500 organizations demanding world leaders take action to combat climate change."

"Here are some of the leading artists, athletes and influencers helping to spread the word about the People's Climate March. We're updating this list as supporters sign on."

7:00-9:00pm: Global Ambassadors Symposium Location: The Auditorium at Alvin Johnson/J.M. Kaplan Hall 66 West 12th Street, NYC Info: Features “Climate Ambassadors”, who together have over a century of experience in fighting climate change in Turkey, Peru, Senegal, Poland, Argentina, India, Philippines, and the Pacific Islands. The ambassadors all have deeply compelling stories, strong presentation skills, and the ability to tailor message by issue, region, or global areas of interest. For full description, visit: http://milanoschool.org/climateaction

6:00-8:00pm: Naomi Klein Book Launch Location: New School, 21 W 11th St, New York, NY Info: Journalist and bestselling author Naomi Klein will present her first book in seven years, This Changes Everything: Capitalism vs. The Climate, with a speech followed by a discussion with activists at the forefront of social justice struggles. Klein has been a leading voice of the People’s Climate March and the growing climate movement.

10:00-10:30am: People’s Climate March Press Conference Location: On Central Park West between Columbus Circle and 60th Street Info: The official press conference for the People’s Climate March will bring together speakers from diverse walks of life, united behind the goal of pressuring global leaders to act in reversing climate change. Media outlets will not need credentials or confirmation to attend this event, and there will be ample opportunities for photo and video. March organizers will provide a riser and A/V connections for TV cameras.

1:00pm — Sounding the Climate Alarm Location: Throughout the entire march Info: After a moment of silence, the entire march will ring out with trumpets, bells, drums, whistles as tens of thousands of people sound an alarm for climate action. With more than 32 marching bands confirmed for the march, this will be an exciting, dynamic and loud show for TV and radio.

2:30pm-5:30pm — March End Location: 11th Ave. in the streets between 34th Street and 38th Street Info: The march will end with a block party. At the center of the close will be a massive tree installation created by Brooklyn-based artist Swoon. See more details here: http://theclimateribbon.org/