UNITE HERE! is a union of workers throughout the U.S. and Canada who work in the hospitality, gaming, food service, manufacturing, textile, laundry, and airport industries, the majority of which are women.[1]

In 2004, UNITE announced that it would merge with the Hotel Employees and Restaurant Employees Union (HERE) to form UNITE HERE.[4]

Patron for a DSA Event

On June 13, 2002 Boston Democratic Socialists of America presented its 25th Annual Debs–Thomas–Bernstein Awards to "leaders who fight for democracy, here at home and around the world". State Representatives Pat Jehlen and Anne Paulsen, Co-Chairs of the Progressive Legislators Group received the award. Ellen Feingold, the earliest known recipient (1979) spoke on the history of the organization. David Knuttunen and Susan Davidoff were benefactors of the reception. UNITE HERE was a patron of the reception.[7] 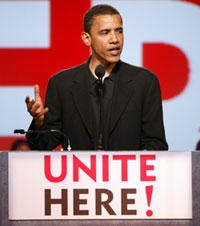 “Barack Obama began his career organizing working families who were trying to pick up their lives as their industries were leaving them behind. As he entered politics, we knew that he would understand our members and we supported him from the start. Our organization and our members will do everything in our power to see that he reaches the White House this fall, because we know he will bring working Americans with him.”[8]

Barack Obama was sworn in to office wearing a tuxedo made by UNITE HERE members at Chicago's Hart Schaffner Marx factory, which UNITE HERE says demonstrates the pro-worker values that he will bring to the Presidency.[9]

Moratorium NOW! is affiliated with the Bail Out the People Movement and is controlled by the Workers World Party. The organization's office is located at the Central United Methodist Church and holds meetings there.[11][12]