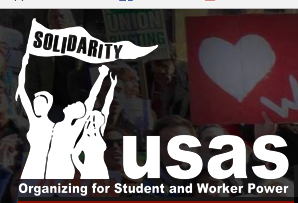 United Students Against Sweatshops (USAS) is based in the Philippines, and the United States. It is heavily penetrated by the Freedom Road Socialist Organization.

United Students Against Sweatshops is the nation’s largest youth-led, student labor campaign organization, with affiliated locals on over 150 campuses. USAS affiliates run both local and nationally-coordinated campaigns for economic justice in partnership with worker and community organizations. Since 1997, USAS has won precedent-setting campaigns, educated students about the growing dominance of corporations in the globalized economy, as well as the intersectionality of identity and social justice issues with the labor movement, and has trained tens of thousands of young activists to become skilled organizers, researchers, and campaigners in labor and social justice organizations.

USAS seeks to hold accountable multinational companies that exploit the people who work on university campuses, in our communities, and in the overseas factories where collegiate apparel is produced. Students have unique leverage over the colleges and universities that are often the largest employers, the largest landlords, and large institutional investors in our communities and regions. Students also have leverage over the companies that value universities as clients. Over the past 19 years, USAS has won significant campaigns for organizing rights, fair contracts and living wage policies on campuses and in communities all across the US, using student power to support workers struggling to transform minimum wage jobs into living-wage, union jobs, and ensure universities support ethical contractors that set – not undercut – good employment standards in local economies.

USAS is committed to building the next generation of progressive leaders who will be at the forefront of labor and social justice struggles. In carrying out this mission, we actively practice the principles of collective liberation to prioritize the development and mentorship of students of color, working class students mixed-race students, women, transgender, queer and differently-abled students. We strive to build deep relationships with other grassroots movements because we believe the labor movement is part of broader struggle for global justice.

Read more about our current national leadership and our mission, vision, and organizing philosophy. You can also find an explanation of how our organization is governed, including a record of decisions membership has made.