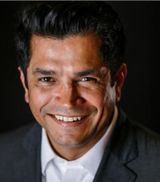 He is married to Mary Hodge.

Jimmy Gomez was born and raised in Southern California and is the youngest of six children. His parents and four of his siblings immigrated to California from Mexico in the early 1970’s. His parent’s struggle to care for their family while trying to provide in times of illness and emergency, was the inspiration behind Gomez’s Paid Family Leave legislation.

Prior to serving in the State Assembly, Gomez served as Political Director of the United Nurses Association of California and brings with him over a decade of experience in local, state and national politics, including the American Federation of State, County and Municipal Employees (AFSCME), National League of Cities, Democratic National Committee, office of former L.A. City Councilman Michael Feuer, and the office of former Congresswoman Hilda Solis.[1]

California Assembly member Jimmy Gomez, 42, won a plurality in the recent primary election held to choose a replacement for long-serving Congressman Xavier Becerra, whom Gov. Jerry Brown tapped as the new state attorney general. His runner-up, a Korean-American named Robert Lee Ahn, 41, scored well in the Korean-American population in the district, but that represents only 6 percent of the area’s demographics.

This East L.A. district, has had Democratic Latino representation in Congress for many decades.

Gomez is a lifelong Democrat, endorsed by the Democratic Party and various caucuses within and around it, such as Democracy for America and Our Revolution, as well as most of the major unions, Sierra Club, immigrant rights groups, Equality California, Planned Parenthood Action Fund, and the Los Angeles Times.

The California State Senate recently passed SB 562, which would create a universal, single-payer health care system in California if it passes the Assembly and if it is signed by the governor. Even passing the Senate was a major accomplishment, and Jimmy Gomez played a key role in making it possible as one of the bill’s key co-authors. His election presents an opportunity to make the Democratic Party in Congress more progressive, and build the momentum for single-payer, Medicare for All nationwide. Support for single-payer health care may soon become a default position for all Congressional Democrats, and could be a leading issue in the 2018 midterm elections.

Gomez capped off the string of announcements with a highly sought-after endorsement from Our Revolution, the political group launched by Sanders himself. And just after the state Democratic Party convention last weekend, Gomez joined a newly formed progressive legislative caucus.

“The Bernie vote is becoming more and more important as time goes on,” said Maclen Zilber, a strategist who helped run the short-lived campaign of former assembly speaker John A. Perez for the seat.[3]

Our Revolution, the political group Vermont Sen. Bernie Sanders launched from the ashes of his presidential campaign, has endorsed Democrat Jimmy Gomez in the race for L.A.'s 34th Congressional District.

In a statement, executive director Shannon Jackson cited Gomez's upbringing and said he "knows the struggles that too many families face."

Gomez, who faces fellow Democrat Robert Lee Ahn in the June 6 runoff for the seat, has been consolidating support from progressive corners since the primary, with endorsements from the California Nurses Association. and other prominent Sanders backers, including Our Revolution board member Lucy Flores. [4] 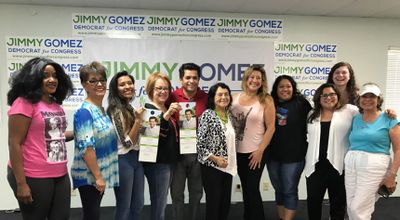 Helping Gomez to win this critical election, Communist Party USA member Eric Gordon crossed downtown L.A. from the Westside to the East to do some phone banking on Monday, the day before the election. This was going to be a low turnout election, so clearly every vote would count.

Campaign headquarters in Highland Park, in Northeast L.A., was a spacious room in a commercial complex, with tables set up for callers and a generous supply of caloric snacks and coffee. When I arrived the troops were thin, and I settled down to a table in the back where I could hear better against the hum of other callers and the many private conversations among old friends who met up there.

I had 14 pages of Democrats in the district to call, but most of them were NH—Not Home—so I had few live conversations, and we were instructed not to leave messages. From those people I did reach, apparently their phones have been ringing like church bells on a wedding day with calls for Jimmy Gomez, and that got pretty annoying. The campaign concluded that voters would rather not hear any more.

The caller next to Gordon was Dolores Huerta.

“Hello, my name is Dolores Huerta, and I’m calling for Jimmy….” Yes, it was indeed the one and only, the iconic co-founder of the United Farm Workers, and one of America’s great progressive standard-bearers, still going strong at the age of 87! I had met her once before, in 1999, when the Southern California Workmen’s Circle/Arbeter Ring, which I headed up at the time, presented her with our headliner social justice award at a fundraising banquet. She remembered it well.

At Dolores Huerta’s table sat another political celebrity making calls. It seemed like she had mostly Spanish speakers on her list. “Yo soy Maria Elena,” she’d say, “y yo soy voluntaria….” This was the estimable Maria Elena Durazo, former secretary-treasurer of the Los Angeles County Federation of Labor, widow of Miguel Contreras who held that position before her, and more recently an officer with UNITE-HERE concentrating on immigrant issues.[5]

1st they made us remove our signs, filtered out any hard question regards to Single Payer, then they tried to shout us down while we chanted "Single Payer Now" at the end of the "forum". We won't give up the fight for Single Payer Healthcare, and we are so tired of hearing excuses and talking points from leaders influenced by for-profit private insurance companies and pharmaceutical companies. Medicare for all coverage is long over due! #WeakSauceForum #SB562 #HealthyCA

Medicare For All Congressional Caucus founders

As at 2009, Jimmy Gomez, Political Director, United Nurses Association, was on the Board of Directors of the Liberty Hill Foundation, a Los Angeles based organization seeking to advance movements for social change through a combination of grants, leadership training and alliance-building.[6]

In July 2017 Jimmy Gomez was a new member of the Congressional Progressive Caucus.[8]

On June 30, 2015, Courage Campaign honored Douglas Moore, Jr., for his visionary leadership as Executive Director of United Domestic Workers of America, and his profound dedication to California’s workers and the broader progressive movement. Held at the beautiful Citizen Hotel in downtown Sacramento, the United in Courage Awards brings together California’s progressive leaders in the heart of the capital for a casual and celebratory evening. Presenting the award to Moore was Charisse Bremond Weaver, President of Brotherhood Crusade in Los Angeles. The inaugural Legacy in Courage Award was given to Willie L. Pelote, Sr., following his retirement from AFSCME California People. Assemblymember Jimmy Gomez spoke and presented the award to Pelote. 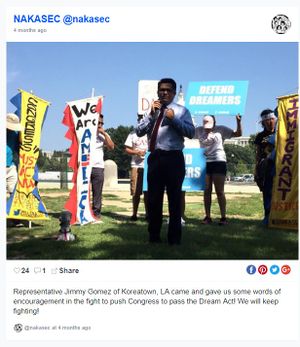 Join us to stand up for the values of love, compassion and family as we begin a campaign of righteous resistance. We will join hands and stand together to oppose criminalization, mass deportations, and hate crimes. We are #HereToStay and we shall not be moved.

I’m making calls for Abby Finkenauer for Congress from the campaign office and you can too!

‪Happy to announce I was elected Vice-Chair of the Future Forum Caucus (young D members of Congress) along w/ Congressman Jimmy Gomez & Congressman -elect Antonio Delgado. Excited to join our Chairwoman Congresswoman Murphy as we work to bring hope and opportunities for growth across generations. ‬ — with Abby Finkenauer.