Liberty Hill Foundation is based in Los Angeles.

Liberty Hill Foundation is a partner organization of the Institute for Policy Studies[1].

The 'Liberty Hill Foundation received grant funds from the McKay Foundation in 2006. 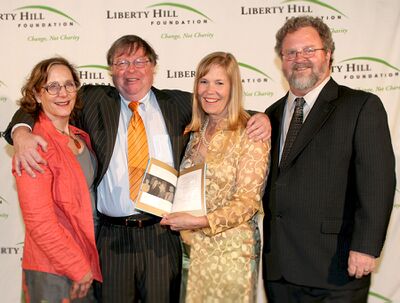 When Liberty Hill began in 1976, it was a "daring new foundation that turned philanthropy on its head. Today it is a national leader in social justice that other organizations watch and emulate".

Liberty Hill's goal was never charity. It is change.

Four young people - Sarah Pillsbury, Win McCormack, Anne Mendel, Larry Janss - had the "guts and vision to launch this experiment. They invented an organization that would underwrite the delicate and difficult work of long-term social change by investing in grassroots community organizing and leadership. Liberty Hill raised expectations and eyebrows."[2]

In 1980, we were first to fund dockworkers suffering from White Lung disease. Our support sparked the national movement to regulate asbestos and win compensation for millions of exposed workers.

In 1994, we were first to fund a movement for living wages. Our early investment sparked new laws that raised wages for 25,000 poverty-wage workers and moved them across the poverty line. Our continued investments have won wage increases for hotel workers, taxi drivers, grocery workers, garment workers and other hard-working men and women.

In 1996, Liberty Hill was first to fund LA’s new environmental justice movement. Every Californian breathes easier as a result. We’ve won millions in pollution reduction programs, as well as new regulations to protect the health of Californians most exposed to pollution’s deadly consequences.

In 2001, our long-term investments in student-led school reform resulted in a L.A. Unified School District commitment to overhaul course offerings at L.A.’s lowest-performing schools. Without Liberty Hill, thousands of students would continue to graduate high school without the courses required for college admission. 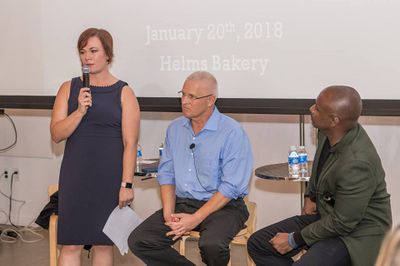 On January 20 2018, Liberty Hill Foundation's Advisory Council "participated in a strategy session led by Councilmember Mike Bonin and Councilmember Marqueece Harris-Dawson on building a just Los Angeles and how we can resist the attacks from Washington on our communities while solving pressing problems such as homelessness, climate change, racism and criminalization of our youth."[3]

The 2018 honorees include Congressman John Lewis and Elizabeth Levitt Hirsch.[5]

On November 12, 2016 the Liberty Hill Foundation posted a photo of Congresswoman Karen Bass with author Nancy Cohen on Facebook.

On November 12, 2016 the Liberty Hill Foundation posted a photo of Congresswoman Karen Bass with author Nancy Cohen on Facebook.[9]

A 1983 Liberty Hill Foundation grant for $1,000 went to support United Against Black Genocide: “United Against Black Genocide is an organization formed to voice the concerns of the Black community of South Central Los Angeles over inadequate health services in the neighborhood and the chokehold deaths of residents at the hands of the Los Angeles Police Department. UABG is concerned about the pattern of these deaths, in which 14 of the 17 victims have been young Black men, and believes that they are a result of racist attitudes and practices of the police department. This grant was provided to help establish the organization’s office and to promote better health care in the Black community.” Liberty Hill allies have long focused on police violence against Black Angelenos, most recently through our Rapid Response Fund for Racial Justice.[10]

The Liberty Hill Foundation lists it's "Board of Directors" as follows as of January 25 2018:[11]

The Liberty Hill Foundation lists it's "Advisory Council" as follows as of January 25 2018:[12]

Kafi Blumenfield, wife of California State Representative, Bob Blumenfield, is the President and CEO of Liberty Hill Fund in 2011.[15]