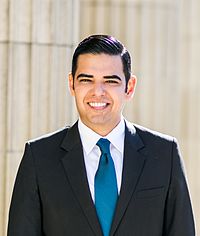 Robert Garcia...(born December 2, 1977) is a Peruvian-American educator and politician who is the 28th and current mayor of Long Beach, California. A member of the Democratic Party, he was first elected in the 2014 election and won reelection in 2018.

A former member of the Long Beach City Council, Garcia was vice mayor from 2012 to 2014.

In December 2021, Garcia announced that he would be a candidate for the U.S. House of Representatives in 2022. The state lost a congressional district in redistricting for the first time ever, and incumbents Lucille Roybal-Allard and Alan Lowenthal both declined to run for re-election.

Robert Garcia was born in Lima. He immigrated to the United States with his mother at age 5. Garcia attended California State University, Long Beach, where he became President of the Associated Students, was an active member of the Delta Chi fraternity, and graduated with a degree in Communication Studies.

In 2007, Garcia founded the Long Beach Post, a website devoted to local news and sports reporting. The site soon became popular with local political figures and community leaders and gave Garcia increased local prominence. He sold the local website before being elected Mayor.

Garcia was the California Youth Coordinator for the George W. Bush 2000 presidential campaign. He also founded the Long Beach Young Republicans in 2005. Describing himself as socially liberal and fiscally conservative, Garcia guided and organized the Young Republicans, which developed a charter that was recognized as an official club by the Los Angeles County Republicans. Garcia also worked as an aide to Republican former vice mayor Frank Colonna when he was on City Council and ran Colonna's unsuccessful bid in the 2006 Long Beach, California mayoral election.

Garcia changed his party registration to Democratic in 2007 prior to being elected to office. He and his family originally registered as Republicans when they first became citizens due to President Ronald Reagan signing an amnesty bill.

No to China committee

Sixty-five Democrats in the House of Representatives voted on Tuesday January 10, 2022, against creating a committee to investigate China and find ways to counter the communist country’s growing international influence.

The House overwhelmingly voted to create the Select Committee on the Strategic Competition Between the United States and the Chinese Communist Party on a 365 to 65 margin, in one of the first votes since the Republicans took control of the chamber.

However, even though some members did not vote, all 65 lawmakers who voted against the committee’s creation were Democrats, including Robert Garcia.

In May 2019, Garcia joined Gavin Newsom, Representative Barbara Lee and others in becoming a California state co-chair forKamala Harris's 2020 Presidential campaign. He was the only Mayor to join state leaders as a co-chair.

In July 2020, after Harris bowed out of the Democratic primary and she and Garcia had endorsed Joe Biden, he went on to join the Latino Leadership Committee for the Biden campaign.

During an event at the AFL-CIO headquarters in Washington, D.C., Pramila Jayapal said that 15 of the 18 candidates the CPC's political arm had won their elections as of Sunday, with another win potentially on the way.

“There’s no question this will be the most progressive Democratic Caucus in decades,” Jayapal said, adding that they will have over 100 members in the 118th Congress compared to their current membership of 99.

By the numbers: Jayapal was joined at the press conference by nearly a dozen incoming members.