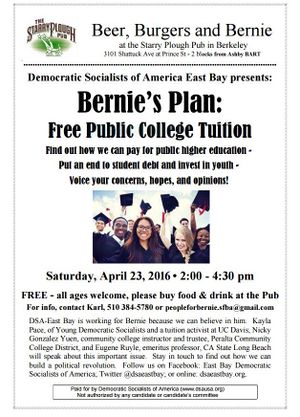 Find out how we can pay for public higher education, put an end to student debt, and invest in youth. Voice your concerns, hopes, and opinions!

FREE – all ages welcome, please buy food & drink at the Pub. For info, contact Karl Knobler, DSA-East Bay is working for Bernie because we can believe in him. Kayla Pace, of Young Democratic Socialists and a tuition activist at UC Davis; Nicky Gonzalez Yuen, community college instructor and trustee, Peralta Community College District, and Gene Ruyle, emeritus professor, CA State Long Beach will speak about this important issue. Stay in touch to find out how we can build a political revolution.[1] 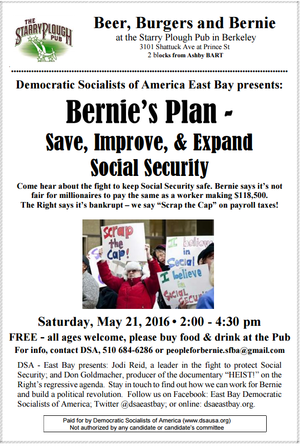 Jodi Reid, a leader of the fight to preserve social security, and Don Goldmacher, producer of the documentary "Heist", participated in a May 21 2016, East Bay DSA event.

Ben Fife, was in 2017, contact for East Bay Democratic Socialists of America.[2]

East Bay Democratic Socialists of America worked on three electoral campaigns in 2018: National DSA endorsee Gayle McLaughlin, running as an independent for lieutenant governor; Jovanka Beckles, an East Bay DSA member running for state assembly; and a ballot initiative to repeal state-imposed limits on local rent control. The three campaigns fit together nicely: When McLaughlin and Beckles served together on the Richmond City Council, they helped pass the state’s first new rent control measure in 30 years, inspiring housing activists in other cities around the state to follow suit.[3]

East Bay Democratic Socialists of America (DSA) is celebrating the primary victory of DSA member and Richmond City Council Member and Vice Mayor Jovanka Beckles, who will advance to the run-off election for California Assembly District 15 (AD15) in November. With some ballots still remaining to be counted, Beckles has clinched the second place slot over Oakland City Council Member, Dan Kalb, who conceded this afternoon.

Without financial or political backing from corporate interests, the Beckles campaign relied instead on support from DSA, Our Revolution, and Richmond Progressive Alliance. Based on her record of passing the first rent control law in California in decades as well as "Ban the Box", and leading the way in forcing Chevron into compliance with environmental and worker safety standards, Beckles has organic support from the working people of the East Bay. She is strongly committed to repealing Costa Hawkins and implementing rent control and affordable housing, passing single-payer healthcare, and funding education by closing corporate tax loopholes. 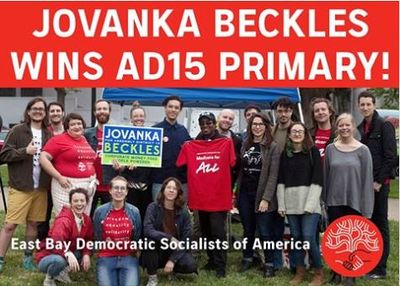 DSA organized 250 volunteers who knocked more than 8,000 doors in competitive AD15 neighborhoods, made 2,500 voter turnout calls and canvassed thousands of voters in public locations ahead of the primary. DSA directly turned out 750 supporters and influenced thousands more to vote for Beckles, who has been declared the winner with a narrow 300 vote lead over Kalb. This electoral success builds on recent DSA-backed political victories, including 18 DSA members elected in 12 states last November, four DSA-backed Pennsylvania state House candidates who won their primaries in May, and the June 5 success of San Francisco's DSA chapter in campaigning for Proposition F, guaranteeing right to counsel for tenants facing eviction.

Beckles will face Buffy Wicks in November. Wicks is a corporate-funded, Democratic Party careerist: a former Hillary Clinton 2016 campaign director and newcomer to AD15 with no experience as an elected official. Far out-spending all her opponents in the most expensive primary race in the district’s history, Wicks raised more than four times as much as Beckles to fund a massive primary operation, demonstrating the power that corporate elites and the Democratic Party establishment can wield in our political system. The Govern for California PAC, which was founded and is funded by Walmart Chair Greg Penner, tech investor Ron Conway, and David Crane, former advisor to Arnold Schwarzenegger, alone poured half a million dollars into campaigning for Wicks.

"Going into November, DSA calls on working people and progressive organizations like the Richmond Progressive Alliance, labor unions, tenants rights organizations and environmental activists to build the movement that can stand up for working class interests. DSA sees a clear choice between a candidate for and by working people on the one hand, and Buffy Wicks, who is for and by corporate donors and the Democratic Party establishment. When Jovanka is elected to the legislature, democratic socialists, unions, and progressive activists will continue to fight alongside her against corporate greed to carry on Bernie Sanders’s political revolution and grow the movement that can transform our society into one that puts people over profits."[4]

With just 182 votes separating DSA member Jovanka Beckles from Dan Kalb in Assembly District 15, we still don't have final results from yesterday's primary - but we do know that our work on this campaign has been a win for democratic socialism and the working class! 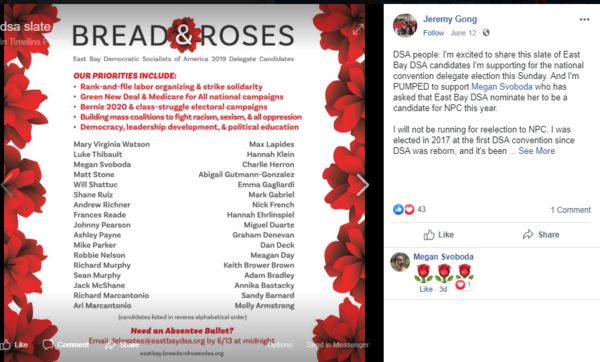 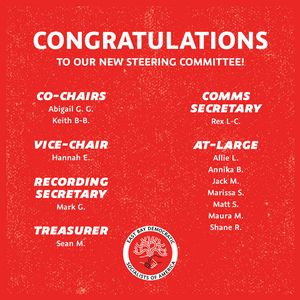 Immediately after the 2016 presidential election, the California Nurses Association (CNA) jump-started a campaign to win single-payer healthcare in California. This February, East Bay Democratic Socialists of America decided to join the nurses and make the Healthy California campaign our organization’s central fight.

Within a month, our chapter held a preliminary canvassing event to train a dozen canvassing captains. Then we multiplied our capacity and held a second event three weeks later with more than 160 volunteers. These volunteers — mostly first-time canvassers — spread throughout the East Bay to educate the community about the single-payer system and mobilize supporters in favor of SB 562.

The Regular twice a month meeting, from here on scheduled for the second and fourth Sunday of each month from 7pm-9pm, of the East Bay DSA Executive Committee was held today, January 29, at 7pm at the Niebyl-Proctor Marxist Library in Oakland CA. The Meeting was Chaired by Jeremy Gong, Co-Chair of the Executive committee. The secretary was also present and recording notes. All officers and at large members of the Executive committee were present. The meeting was open and several committee chairs as well as other members were present in attendance at the meeting. The minutes of the last meeting were approved without amendment but with suggestions for future consistency around the inclusion of names.

Kevin Wright was sick today and could not be part of the meeting.

East Bay Democratic Socialists of America members only closed Facebook group, as of May 28. 2017;

This is a group to build community amongst the members of East Bay DSA. 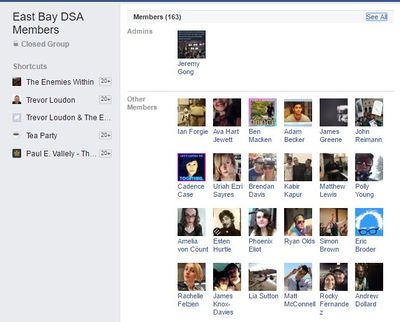 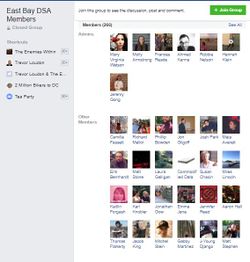 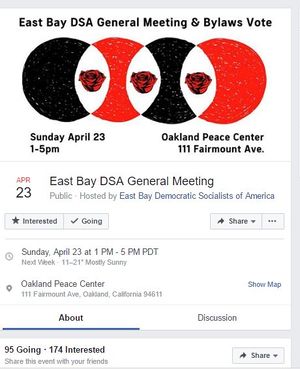 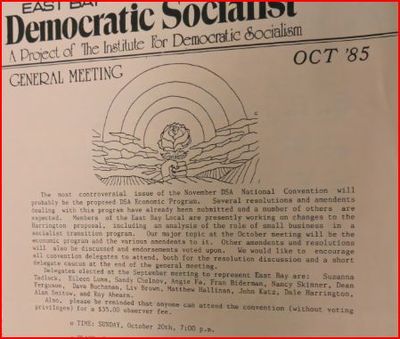 In May 2000, Berkeley Campus DSA held a successful rally and teach-in on campus about the Bush tax plan, with Daniel McFadden, the 2000 Nobel Prize winner in economics, and political satire and music by the Wealth Wielding Wailers. The event made the news and was, according to DSA NPCer Michele Rossi, “the most fun I’ve had doing political education/activism in ages.”[12]

According to Karl Knobler, in 2002 East Bay DSA joined with progressive Democrats and the Committees of Correspondence in the People’s Electoral Project to support propositions and get Tom Bates elected Mayor of Berkeley.[13]

In 2002 East Bay DSA, was active on many fronts, playing key roles in a Socialist Unity Group with non-DSA socialists, which has had a number of forums on topics such as the war and the CA recall campaign; in United For Peace and Justice, and thus the large anti-war movement in the Bay Area; in the Paul Wellstone Democratic Renewal Club of Alameda.[15]