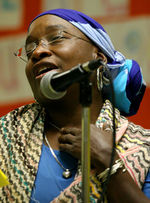 A march and rally took place Durham, North Carolina April 28 2007 against sexual violence and assault. The protest was called Creating a World Without Sexual Violence—National Day of Truthtelling (DOT).

Alexis Gumbs, a Black graduate student at Duke, read a moving open letter to the crowd in front of the Buchanan house.

The main rally was held on the steps of the Durham County Courthouse. Speakers there included Serena Sebring, UBUNTU; Monika Johnson Hostler, NCCASA; Paulina Hernandez, SONG; Tyneisha Bowens and Laura Bickford, Raleigh FIST; Shafeah M'Balia, Women’s Commission of BWFJ, and Phoenix Brangman, Dasan Ahanu and Bryan Proffitt of Men Against Rape Culture. A number of the speakers linked the issue of sexual violence to the struggle for immigrant rights and against racism, homophobia, capitalism, militarism and imperialism.[2]

“Forging a Black Liberation Agenda for the 21st Century”

M'Balia attended the 6th National Convention of the Committees of Correspondence for Democracy and Socialism (CCDS) at San Francisco's Whitcomb Hotel July 23-26 2009.[4]

Zach Robinson and Shafeah M'Balia reported on work in the South, and the special role played by democratic forces opposed to the right wing. They highlighted a multi-racial, grass roots people's charter movement initiated by the NAACP in North Carolina that parallels the "Democracy Charter" and mobilized thousands to march on the capital in Raleigh earlier this year.

On September 21, 2010, Shafeah M'Balia attended a meeting at a midtown hotel with President of Iran, Mahmoud Ahmadinejad, and approximately 130 members of the U.S. "peace and social justice movements", as well as "major figures in the Black activist community." M'Balia was also among those who made opening remarks at the meeting.[7]

More than 100 activists and journalists from a variety of organizations, religious groups and media outlets attended a gathering with Iranian President Mahmoud Ahmadinejad at the Warwick Hotel here Sept. 21. The leader of the Islamic Republic of Iran was in the city to attend the annual United Nations General Assembly.

These prominent leaders of grassroots social justice and human rights movements within the U.S. consciously rejected a well-funded campaign to demonize Iran and whip up a pro-war climate. Ahmadinejad’s visit had been preceded by incendiary billboards, ads in buses and newspapers, hostile media coverage and demonstrations against Iran, much of it funded by the CIA-connected U.S. Agency for International Development and private corporations.

After an Iranian-style dinner, the gathering moved to a conference room where representatives from various organizations spoke on the plight of people inside the United States. The displacement of African Americans in the aftermath of Hurricane Katrina, the burgeoning prison-industrial complex, conditions facing political prisoners, the crisis in U.S.-Iranian relations and the overall economic crisis dominated the discussion.

After listening for an hour and a half to 22 different speakers, President Ahmadinejad addressed the guests for approximately 45 minutes. He touched on the international struggle for peace and justice, saying that “trying to build peace is the most important and comprehensive struggle that mankind can have.”

He added, “Those who are opposed to justice are a few, a minority.”[8]

The annual Black Workers for Justice event commemorating the death of Dr. King and highlighting his support for workers was held Saturday, April 11 2015 at the NCAE Building located at 700 Salisbury Street. The guest speaker will be Alicia Garza, co-founder of the Black Lives Matter Movement.

The theme, “Reclaim Dr. King’s Legacy of Resistance: Black Lives Matter/Stop the War on Black America” was selected because it captures the horrible reality we are facing and suggests a way forward. The murders just keep on coming. The world is watching the video of a white police officer in North Charleston, South Carolina gun down a fleeing Walter Scott, a 50 year old 2015 banquet flyer.colorAfrican American man. He was stopped for a minor traffic infraction.