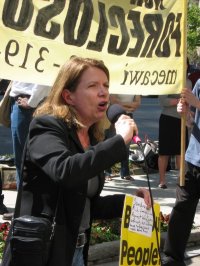 Template:TOCnestleft Sharon Black is a national organizer of the Workers World Party

It also banished Peoples Power Assembly page editor Charlene Lady J. Jenkins, a founder of “What’s Up Baltimore,” whose Baltimore grassroots network was shut down as a result.

In addition, 16 individual activists’ profiles were disabled, which means that close to a dozen other progressive pages and groups were frozen when their administrators were disabled, including: the Baltimore Harriet Tubman Solidarity Center, ICE Out of Baltimore, Prisoners Solidarity Committee, Youth Against War & Racism, and Baltimore and Maryland Amazon Workers.

Sharon Black stated: “Facebook’s disabling of pages and the accounts of major activists who have not violated community standards is meant to silence and censor our voices. The Peoples Power Assembly has played a significant role in the Baltimore Black Lives Matter protests in the summer and more recently opposing Trump’s effort to overturn the election. On Dr. King Jr.’s birthday holiday, we held a car caravan to Jessup Correctional Institute and the Howard County Immigrant Detention Center to demand justice for prisoners and detainees.”

Berta Joubert-Ceci, founder of the Women's Fightback National Network/Red Nacional de Mujeres en Lucha and Women In Struggle, stated, "It is appalling - the cowardice of Facebook in silencing the voices of women and progressive people who struggle for justice and a better life for all." Joubert-Ceci is also an organizer of the International Peoples' Tribunal on U.S. Colonial Crimes in Puerto Rico. Her personal page, used to connect with the Puerto Rican movement, was deleted along with Women In Struggle.

Attorney Summerfield stated, “We intend to fight this. This includes waging a public campaign to demand that the pages of all activists and the groups they represent are reactivated. We intend to use every avenue at our disposal, including legal remedies, to stop the censorship of voices that are too often marginalized.”[1]

Hundreds of activists braved the cold for a march and rally that began at Times Square in New York City on Feb. 17, 2007.

Other speakers included Councilperson Charles Barron, who recently introduced a local resolution against the war funding, Chris Silvera, chair of the Teamsters National Black Caucus and representatives from Millions for Mumia and Fanmi Lavalas.[2]

Signers of the letter included Sharon Black of the AFT, Local 2, and Bail Out the People Movement.[3]

The Baltimore branch of Workers World Party celebrated the 90th birthday of Cuba’s historic leader, Fidel Castro, on Aug. 13, 2016. An introductory panel featured Fred Mason, president of the Maryland/Washington, D.C., AFL-CIO; Leslie Salgado, from Howard County Friends of Latin America; and Cheryl LaBash, a co-chair of the National Network on Cuba. In a “fish bowl” discussion, four young organizers described what socialism means to them, followed by questions and comments from others.

In 2017 Baltimore police officers arrested four May Day protesters, including noted activist Rev. Cortly Witherspoon, after a group unfurled a yellow sign on Gay Street, outside the United States Customs House downtown, and sat down in the street.

The rally, which included about 60 protesters, was organized by the Women's Fightback Network Maryland/D.C., Peoples Power Assembly, and Workers World Party-Baltimore and was part of a larger wave of pro-labor, anti-Trump protests around the world, started in McKeldin Square around 3 p.m. and moved through the downtown area.

Stopping at Baltimore's Customs House was tied to one of the central points of the "Baltimore May Day Global Strike" to "defend immigrants and Muslims."

"ICE is the notorious agency that has brutally separated immigrant families and deported scores of immigrants under new orders from the Trump administration," said Sharon Black, People's Power Assembly spokesperson, in a released statement

Protesters initially stood in the street around the sign on Gay Street, blocking traffic, and police warned that anyone who didn't want to be arrested should move to the sidewalk. Most did, but four people, including Witherspoon, continued to sit on the pavement with the sign and were arrested. People's Power Assembly identified the other three as Rasika Ruwanpathirana, Andrew Mayton, and Alec Summerfield. When the arrestees were placed in the police van, they were recorded by another police officer.[6]