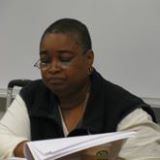 In 2000 Ashaki Binta was the Atlanta contact for Black Radical Congress[1].

In 2000 Ashaki Binta served on the Coordinating Committee of the Black Radical Congress.[2] 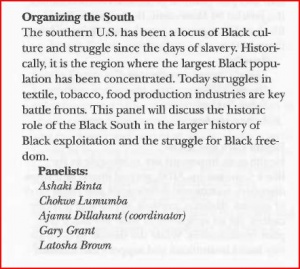 In 2009 Ashaki Binta served on the Advisory Committee of the Independent Progressive Politics Network[4].

In 2010, Ashaki Binta was on the Cuban Working Group of the Black Left Unity Network.[5]

Ashaki Binta of the Black Workers for Justice speaking at the Emergency Labor Network Conference, on organizing the South, June 24-26, 2011.[6]

Manzoor Cheema, a research technician at UNC and UE 150 member, said, “We need to put the pressure on Chancellor Moeser and the UNC Board of Governors. This censored article needs to be published immediately. Collective bargaining is a basic workers’ and human right and North Carolina is violating that right.”

UE 150, along with members of Chapel Hill SDS and Student Action with Workers, demanded that UNC publish the censored article, issue a formal apology, and adopt a policy of non-interference in union organizing on campus. SDS member Tamara Tal said, “We call on students to join in this struggle against the blatant denial of workers’ rights.”

Ashaki Binta, coordinator for UE’s International Worker Justice Campaign, explained at the press conference, “We have a bill pending, House Bill 1583, to repeal this statute. We call on UNC to support that and to sit down across the table with workers in Chapel Hill to negotiate on the basic issues affecting their lives.”

The North Carolina legislature will take up the bill to repeal G.S. 95-98 in the summer of 2008. UE 150, along with the North Carolina NAACP and many other progressive organizations, is leading a major state-wide campaign to raise public support and put pressure on the politicians to repeal the statute.

Cheema explained, “We know what it’s going to take. We need a grassroots movement to empower rank-and-file workers and build community support to abolish General Statute 95-98.”

He continued, “Here at UNC, outreach to students can help shift the balance of power in our favor. Students should understand the pain and troubles of workers. UNC is a good school and they have many classes on labor rights and poverty issues - but students need to go beyond textbooks and see the reality for workers on this campus.”[8]