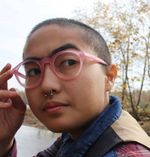 Ngoc Loan Tran is a Virginia/North Carolina activist. Loan Tran is a queer writer and educator of color based in Richmond, VA., with a background in coalitional organizing across the U.S South. Loan has worked on issues of migrant justice, LGBTQ liberation, economic and racial justice and for an end to all interpersonal violence. They co-managed the “Drop the I-word” Campaign in Charlotte, NC to challenge media representation of undocumented immigrants and was a lead organizer with the March on Wall Street South Coalition, which mobilized thousands to protest money in politics at the Democratic National Convention in Charlotte in 2012. Loan was a featured speaker at Historic Thousands on Jones St. (HKonJ) mobilization in 2013 and has had their writing featured on Black Girl Dangerous, Waging Non-Violence, {Young}ist, New York Times and The Advocate. Currently they are a freelance writer and consultant who provides organizational development, trainings and workshops to organizations and institutions across the country. Loan envisions a movement for liberation and justice to be one that leaves no one behind so one day we can all be our authentic selves, lead full lives and be free.[1]

Loan was a featured speaker at the Historic Thousands on Jones St. (HKonJ)/Moral March and has had their writing and commentary featured on Black Girl Dangerous, Waging Non-Violence, {Young}ist, New York Times and The Advocate, among others. Following the passage of HB2, Loan became a spokesperson and leader in the repeal effort. They served in the leadership body of the QTPOCC (Queer and Trans People of Color Collective) that called for actions at the governor’s mansion, and across the state. Loan was one of four people who participated in civil disobedience after the passage of the bill.

Loan is a former board member of G.L.S.E.N. and current board member at the Highlander Research and Education Center. They also serve on the boards the Emergent Fund, a new effort to new LGBT initiatives. In 2016, Loan helped to create the HB2 Queer Mobilization Fund to move resources for resistance to HB2 led by queer and trans people of color They are the Director of the Youth Organizing Institute and the Communications Director for the Southern Vision alliance. Loan is an expert in organizational development, and popular education-style trainings. Loan envisions a movement for liberation and justice to be one that leaves no one behind so one day we can all be our authentic selves, lead full lives and be free.[2]

The following remarks were made by Loan Tran at the Workers World Party National Conference Nov. 7-8 2015 in New York City.

My name is Loan, and I’m with the Workers World Durham Branch. I wanted to take a few minutes to share how excited I am to be here and what it means for me to be here.

I met Workers World Party in 2012 in Charlotte, N.C., and at the time was organizing with undocumented high school students for access to higher education and an end to deportations. In 2012, the Democratic National Convention was on its way to Charlotte, the Wall Street of the South, the second largest banking city in the U.S only after New York City...

To fight side by side with comrades who understand the necessity of a working-class struggle that means LGBTQ liberation, the liberation of oppressed nationalities, the liberation of women, and the liberation of young people is an honor and a privilege. And since 1959, Workers World has demonstrated its unwavering commitment to workers and oppressed people all around the world. Because it is not enough to know what to say, we must know how to act on what we say.[4]

We are calling all freedom-fighters, all justice-lovers, all truth-tellers, all who can't wait to please join Southerners On New Ground and the #SayHerName crew for a community forum and visioning session. Let's speak our truths and sow the seeds of a new way forward for all our people, with those most impacted, most criminalized, at the center: black and brown people, queer, trans and gender non-conforming folks, working class and poor people, undocumented people ... Let's dream and scheme together and find out ways to throw down for campaigns and direct action that holds the cops accountable

On the Frontlines: Queer People of Color Fighting for Socialism in the US South

In the US South, a growing movement of queer people of color have been rising up against the reactionary, oppressive status quo. The recent struggles against North Carolina's anti-LGBTQ laws, as well as the struggle against racist police terror and the movement against Donald Trump's racist Presidential campaign, have all been flashpoints in the effort to shut down bigotry and oppression in the South. These activists have been on the frontline in the movements to fight back against oppression and to fight for a revolutionary solution, socialism. Loan Tran, Workers World Party Eva Panjwani, Queer Trans People of Color Coalition, Durham, NC

More protesters were arrested Wednesday August 15 2017, for participating in a demonstration that toppled a Confederate statue in North Carolina, and more monuments were vandalized as well.

The statue in Durham came down Monday night when a protester Takiyah Thompson climbed a ladder to attach a rope and others on the ground pulled the bronze soldier from its pedestal.

On Wednesday morning, Dante Strobino and Ngoc Loan Tran were led away in handcuffs when they came to a court hearing for Takiyah Thompson, the woman who climbed the ladder. Another demonstrator, Peter Gull Gilbert, was arrested later.

The Durham County Sheriff’s office said all four arrested so far were charged with two felonies related to inciting and participating in a riot that damaged property, along with two misdemeanors.[9]

Activists and community and family members gathered here the morning of Dec. 5 2017 to show their support and solidarity for 11 anti-racist activists who were returning to court to face charges related to their militant challenges to white supremacy. The Dec. 5 hearing was the first time all 11, who have had several court hearings since August, appeared in court together.

Inside the court, the cases of nine of the activists, who were charged in relation to the Aug. 14 removal of a Confederate statue in front of the old Durham courthouse, were continued by a judge to Jan. 11. The cases of the other two, who face charges related to an Aug. 18 community mobilization against an announced KKK march, were continued to Feb. 8. After the hearing, a rally and press conference were held.

The defendants are inviting community members across Durham to sign up to be witnesses for the defense for the Jan. 11 trial. Elena Everett, a Workers World Party member who faces charges relating to the statue removal, said: “We invite all those who believe that Durham is a better place without the monument, that the monument had no value to our community, and was in fact a liability, to sign up to be a witness. We will set up an online form and email to collect your testimony.”

In a press release prior to the hearing, Workers World Party member Loan Tran stated: “The events of Aug. 14 and 18 were an act of community service and defense. We have to remember what happened just a few days before in Charlottesville, Va., when white supremacists and neo-Confederates terrorized, occupied and brutalized its residents. Heather Heyer was murdered, and many other anti-racist activists were injured.”

“Removing symbols of white supremacy from our community is not a crime,” said WWP member Jess Jude, one of those facing charges regarding the statue removal. “What happened on Aug. 14 was a service to the Durham community and an example of taking righteous action, a small step to correct centuries of injustice.”[10]