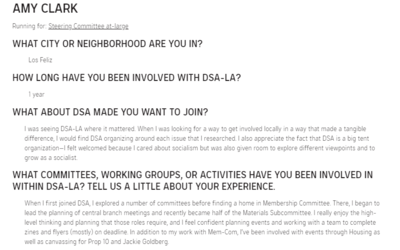 WHAT CITY OR NEIGHBORHOOD ARE YOU IN? Los Feliz

HOW LONG HAVE YOU BEEN INVOLVED WITH DSA-LA? 1 year WHAT ABOUT DSA MADE YOU WANT TO JOIN? I was seeing DSA-LA where it mattered. When I was looking for a way to get involved locally in a way that made a tangible difference, I would find DSA organizing around each issue that I researched. I also appreciate the fact that DSA is a big tent organization—I felt welcomed because I cared about socialism but was also given room to explore different viewpoints and to grow as a socialist.

WHAT COMMITTEES, WORKING GROUPS, OR ACTIVITIES HAVE YOU BEEN INVOLVED IN WITHIN DSA-LA? TELL US A LITTLE ABOUT YOUR EXPERIENCE. When I first joined DSA, I explored a number of committees before finding a home in Membership Committee. There, I began to lead the planning of central branch meetings and recently became half of the Materials Subcommittee. I really enjoy the high-level thinking and planning that those roles require, and I feel confident planning events and working with a team to complete zines and flyers (mostly) on deadline. In addition to my work with Mem-Com, I’ve been involved with events through Housing as well as canvassing for Prop 10 and Jackie Goldberg. 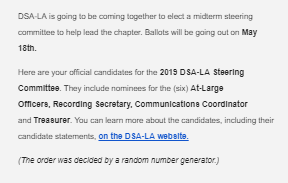 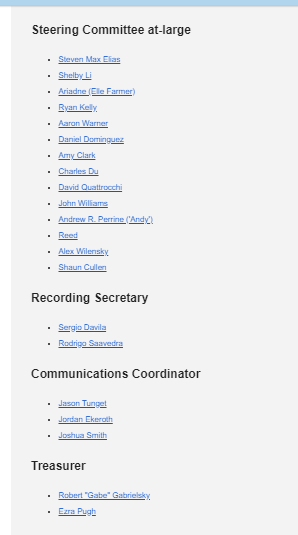 Here are your official candidates for the 2019 DSA -LA Steering Committee. They include nominees for the (six) At-Large Officers, Recording Secretary, Communications Coordinator and Treasurer. You can learn more about the candidates, including their candidate statements, on the DSA-LA website.

In July 2019 Over 25 members in good standing of Los Angeles Democratic Socialists of America submitted a proposal to form a new working group to support Bernie Sanders' 2020 presidential primary campaign to DSA-LA’s Steering Committee by way of regular processes.