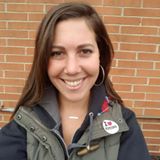 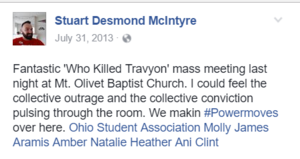 October 4, 2013, as soon as the Zimmerman verdict came through, Ohio Student Association jumped into action. Ohio legislators had just introduced Stand Your Ground in Ohio, and they were putting on the fast-track.

We organized a 500 person mass meeting > took 20 young leaders to DC for the MOW > hosted 3 organizing workshops on Power, Story of Self, and Non-vio... 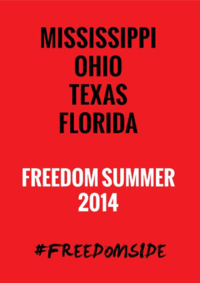 In January 2016, Aramis Malachi-Ture Sundiata, and Molly Shack were in Cuba.

Those indicating they would attend, on Facebook included Molly Shack.[1]

Molly Shack, Ohio Organizing Collaborative’s civic engagement director and also a lead organizer for Columbus People’s Partnership, which advocates for economic and racial equity in the capital city, said Ohio is particularly important because it plays an important role in forging the country’s path. But establishing strong community engagement depends on eliminating racial and class divisions that keep some Ohioans from coming together.

“The fact that we are a swing state; what happens here affects the whole country,” she said. “If we can establish a prophetic voice for Ohio, it is going to be heard and reverberate across the country.”[8]