Miski Noor is an organizer and writer based in Minneapolis, MN, where she works as a Communications Strategist for the Black Lives Matter Global Network and is a leader with the local Black Lives Matter — Minneapolis chapter. She is a graduate of the University of Minnesota whereshe studied Political Science and African and African-American Studies, and also serves as a Lead Trainer and a core team member of Momentum, a civil resistance training program for radical organizers.

As a Black, African, immigrant queer person, Miski is committed to working to create a world in which Black life is protected and our collective liberation is realized.[1]

Black Women in Defense of Ilhan Omar was organized by Movement for Black Lives to defend Rep. Ilhan Omar.

Dozens of women from the Movement for Black Lives, a coalition of African-American advocates, gathered April 30 2019 in support of Congresswoman Ilhan Omar who has been a target of hate-speech and trolling by right-wing politicians and their supporters.

The women gathered in front of Washington’s Capitol building chanting, “We love you” to Omar in the event named “Black Women in Defense of Ilhan Omar.”

"The thing that upsets the occupant of the White House, his goons in the Republican Party (and) many of our colleagues in the Democratic Party," Omar told the crowd, "is that they can't stand that a refugee, a black woman, an immigrant, a Muslim, shows up in Congress thinking she's equal to them."

Miski Noor told Middle East Eye that Omar is facing such criticisms because of her identity. She is a Muslim woman and was a Somalian refugee when she arrived in the U.S.

"There are people, because of their white supremacist and racist views of the world, (who) hate her because of her identities and based on fear," she said.

"At the same time, we know Ilhan is being attacked because of the content of what she's saying,"added Noor.

Ayanna Pressley, Omar’s fellow U.S. Congresswoman, shouted, "Hands off Ilhan,” while criticizing politicians from her own Democratic Party, for failing to stand with the legislator.

She added, "silencing of Black women" won’t be acceptable anymore.

"This is a reckoning. This is us assuming our rightful place, as the table-shakers, as the truth-tellers, as the justice-seekers, as the preservers of democracy," said Pressley.

Omar in her speech said that Islamophobia and anti-Jewish hatred are "two sides of the same coin of bigotry.”

"The occupant of the White House and [his] allies are doing everything that they can to distance themselves … from the monster that they've created that is terrorizing the Jewish community and the Muslim community," the Congresswoman said.

"We collectively must make sure that we are dismantling all systems of oppression," added Omar.[2] 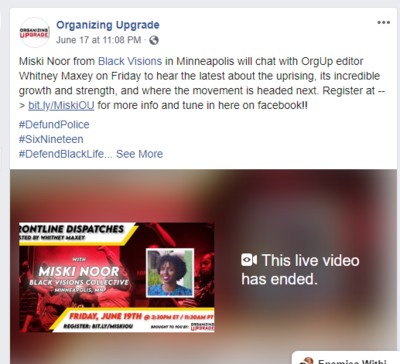 In Defense of Black Lives: National Week of Action Call

"In Defense of Black Lives: National Week of Action Call" was a Zoom call organized by the Movement for Black Lives May 30 2020.

The Black Visions Collective sprang up December 2017, dedicated to creating a brighter future for black communities.

It’s still small, but it’s spry. Its leaders began their activism in Black Lives Matter Minneapolis, protesting the killings of Jamar Clark, a 24-year-old black man killed by Minneapolis police, and Mike Brown, a black teenager who suffered the same fate at the hands of Missouri police.

Fellow organizer Miski Noor (who uses the pronouns they/them) likes to say they were a “legal drug dealer” before Black Lives picked up steam—working at a pharmacy, recovering from activism burnout. They were a community representative for Rep. Keith Ellison. That’s when roommate Kandace Montgomery started holding burgeoning Black Lives meetings in their living room.

Noor and 3,000 others showed up at the Mall of America to protest police shootings. It was like someone had pressed the “go” button on fighting for black lives.

The Collective is an expansion of that movement, about abolishing police, prisons, and cash money bail.

“And calling out Jacob Frey,” organizer Puma Saballos adds. Other members sitting in a Powderhorn apartment nod and share a rueful laugh. The Minneapolis mayor has been interested in bulking up police presence.

In December 2015 police broke up the occupation around the Fourth Precinct police station in North Minneapolis.

The Fourth Precinct protest is often presented as a standoff between law enforcement and a small segment of millennial blacks in North Minneapolis. There’s something of an unspoken agreement in the mainstream media that it’s the protesters on trial, not the police. With descriptors like ‘chaotic scene,’ and ‘shouting and taunting bystanders,’ protesters are presented as a frightening horde to readers. This misses the humanity and individuality of the people involved. Even more, it misses the cause, a structural inequality that’s on the mind of many across the country.

September 2, 2017. Hey family! Here is the final recording from the Black August webinars! Sendolo Diaminah took lots of patience and creativity breaking down Black Ideological Struggle for us.[6]

Yawl. Look at how cute our BLM squad is. Black folks from around the U.S and Canada is planning for victory yawl, in the Lumumba Center of all places (super critical piece).

Deep love to the folks in Cooperation Jackson, Malcolm X Grassroots Movement, Sendolo Diaminah and Adrienne Maree Brown for teaching us, holding us down and to our principles.