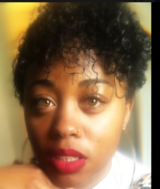 Nikita Mitchell has over eight years of experience in community organizing. She is the Organizing Fellow for the ‘me too. Movement,’ where she designs and implements curricula for the organization’s higher education programs. Previously, Nikita served as the Director of Organizing for Black Lives Matter Global Network.[1]

Nikita Mitchell, 26 in 2020, is national coordinator of The Rising Majority, formed in 2017 by the Movement for Black Lives, a coalition that includes Black Lives Matter. Rising Majority is led by Black people and people of color, and brings social movements together in an anti-racist, anti-capitalist Left for radical democracy.

How long have you been organizing?

NM: I can’t talk about the movement without talking about my grandmother, Dolores Bosley. She is from Bastrop, Louisiana. She grew up in a home for folks who worked in a cotton mill and for sharecroppers. She wanted me to understand two things. One, the legacy of Black people. Two, that I am inherently valuable as a person. I attribute the seeds of my consciousness to my grandmother.

My way into movements was through educational justice work in high school, at 14, through a group called Youth Together. Ever since my family migrated to Oakland, Castlemont High School was the high school we all went to, in a historically Black, Latino and Polynesian community of deep poverty.

One day, they suspended 80 students for a cell phone policy—for cell phones dropping out of pockets, for walking with a phone. That made folks really angry. In addition, outside cops were brought in to deal with violence, with racial tensions, when we knew the solution was not policing. So we landed on the model of restorative justice. That campaign resulted in a citywide resolution to have restorative justice as the main model of harm reduction in schools.

I kept organizing in college. Union organizing with UNITE HERE solidified my commitment to long-term organizing. The thing that got me back into anti-police brutality work was the start of Black Lives Matter. I got a request, like a secret meeting, “Black people come to this location.” I knew Alicia Garza and a few other movement founders, and I showed up. That was the beginning of the BLM Bay Area chapter.

NM: When the mobilizations really began heating up, The Rising Majority did a political education program. We had a virtual session with Angela Davis, Jamila Woods, N'Tanya Lee from LeftRoots, Kayla Reed from Action St. Louis, Karissa Lewis from Movement for Black Lives, Timmy Rose from Dissenters and Greisa Martinez Rosas from United We Dream. That teach-in had about 360,000 views, so I think folks are hungry to be out on the streets, to make meaning in this moment. Education is some of what this movement will be up to in the next few weeks.[2]

September 2, 2017. Hey family! Here is the final recording from the Black August webinars! Sendolo Diaminah took lots of patience and creativity breaking down Black Ideological Struggle for us.[4]

Yawl. Look at how cute our BLM squad is. Black folks from around the U.S and Canada is planning for victory yawl, in the Lumumba Center of all places (super critical piece).

Deep love to the folks in Cooperation Jackson, Malcolm X Grassroots Movement, Sendolo Diaminah and Adrienne Maree Brown for teaching us, holding us down and to our principles.