Charlie Reece is a Durham North Carolina Attorney. He is an At-Large Durham City Councilor.

With Jillian Johnson and Charlie Reece.

Durham for All fundraising letter from Dre Blakeney November 2019.. 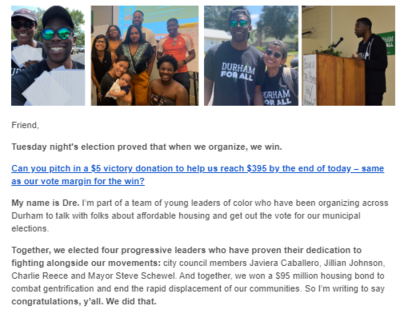 My name is Dre. I’m part of a team of young leaders of color who have been organizing across Durham to talk with folks about affordable housing and get out the vote for our municipal elections.

Together, we elected four progressive leaders who have proven their dedication to fighting alongside our movements: city council members Javiera Caballero, Jillian Johnson, Charlie Reece and Mayor Steve Schewel. And together, we won a $95 million housing bond to combat gentrification and end the rapid displacement of our communities. So I’m writing to say congratulations, y’all. We did that.

For me, Tuesday night’s victories were a celebration of four years of organizing in the Durham community. I first came to the city in 2009 as an undergraduate at NCCU. After graduating and spending a short time away, my partner and I decided to move back and make this city our home. I loved the political community I’d found here, and I still love it today.

I was first introduced to Durham for All by Sendolo Diaminah back in 2016. At the time, I was going through a transition in my life and was also starting to develop an analysis of power. What drew me to Durham for All was that our organization has always rooted our electoral work in a plan for building a longterm movement, and one that centers the leadership of black and brown folks in Durham. I knew I wanted to be a part of that, but at the time I didn’t have a lot of faith in my own power or ability to be an organizer.

The mentorship and support I’ve received at Durham for All has allowed me to overcome my fear and see myself as real leader. Durham for All is deeply committed to putting the government in the hands of the people. One of the most important ways that we do that is by investing in and developing new leaders. The organization has invested in me, and I became a member to continue to invest in the leaders who will come up behind me. Time after time we’ve seen leaders take risks and take on new responsibilities, and support one another through the work. And because of that work, our organization has grown by over 300 members in 2019 alone![1]

Durham for All endorsements 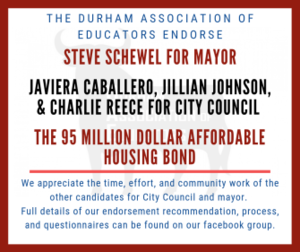 Our members have been busy this week! Members attended the DAE PAC meeting on Wednesday and voted to endorse Steve Schewel for mayor and Jillian Johnson, Javiera Caballero, and Charlie Reece for City Council.Durham for All August 30 2019·

Candidate endorsement results are in! 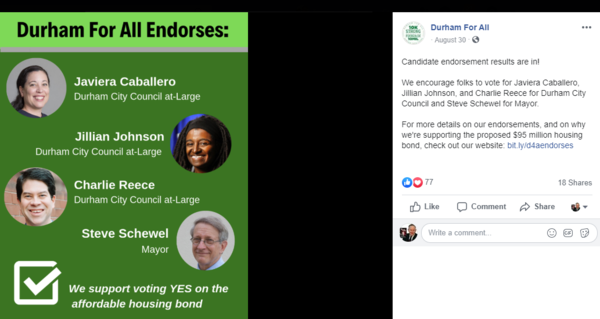 We encourage folks to vote for Javiera Caballero, Jillian Johnson, and Charlie Reece for Durham City Council and Steve Schewel for Mayor. 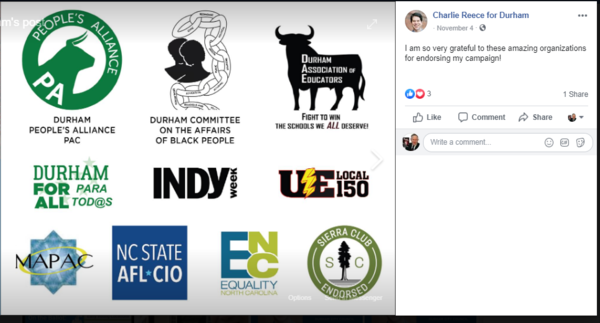 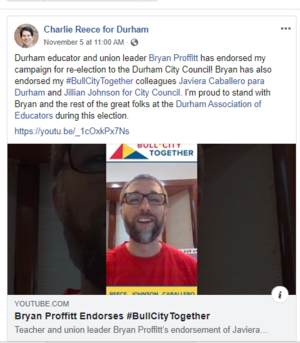 Durham educator and union leader Bryan Proffitt has endorsed my campaign for re-election to the Durham City Council! Bryan has also endorsed my #BullCityTogether colleagues Javiera Caballero para Durham and Jillian Johnson for City Council. I'm proud to stand with Bryan and the rest of the great folks at the Durham Association of Educators during this election.

PA members are going door-to-door tomorrow (Saturday) to Get Out The Vote for our progressive candidates! Join us at 1:30 pm for a quick training before hitting the street to talk with friendly voters. Meet us at 1821 Green Street. See you there!