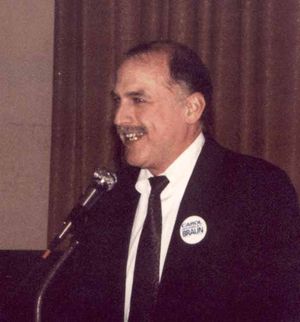 In the late 1960s Ron Sable served as a medic in Vietnam. He later studied medicine at the University of Missouri, coming to Chicago in 1976 to intern at Cook County hospital.[2]

Ron Sable spent his entire medical career at Chicago's Cook County Hospital. He did his residency training in Internal Medicine from 1976-1981, and became an attending physician in the Department of Medicine in 1981. Ron sable devoted his time at the hospital to the clinics and spent many years at the Cermak Health Services of the Cook County Jail.

For Ron, there was no distinction between his medical career in the public sector and his political activism. He was a tireless advocate for health care as a human right. He was an advocate for the rights of the medically underserved, whether gay or lesbian, people of color, women and children, injection drug users, Vietnam veterans, or the 40 million Americans without health insurance.[3]

sable spent his last years as the President of the Illinois Chapter and the National Policy Strategist for Quentin Young's Physicians for a National Health Plan. Until the last two months of his life, he "traveled around the country, organizing physicians toward a single payer system of health care in the United States".

Sable was a leader in Chicago in the fight against AIDS. In 1983, he co-founded the Sable/Sherer Clinic at Cook County Hospital for the care and research of HIV disease. In 1984, Dr. Sable established the AIDS Prevention Service for education and prevention at Cook County Hospital. In 1986, he co-founded the AIDS Foundation of Chicago, on which he was a Member of the Board of Directors until his death. In 1989, Dr. Sable co-founded the Chicago Community Programs for Clinical Research on AIDS with support from the National Institutes of Health. Dr. Sable became the Assistant Director of the Cook County HIV Primary Care Center when it was established in 1992.[4]

Dr. Sable "fought against racism throughout his life". He was among the many supporters of the broad, multi-racial coalition spearheaded by the late Harold Washington.[5]

Ron Sable was a Board Member for 10 years of the Crossroads Fund and the Illinois Public Action Coalition. He served as a medic in Vietnam in 1969-1970, and he was an active advocate for the rights of Vietnam veterans throughout his career.[6]

During his life, he was a fierce advocate for the rights of gays and lesbians. In 1987, he became the first openly gay candidate for alderman in Chicago's 44th Ward. He narrowly lost to the incumbent. Although a second campaign in 1991 was also unsuccessful, he never felt defeated. After the first campaign, he founded IMPACT, a political action committee for the advancement of gay and lesbian issues. He was also an advocate for the rights of all women to freedom of reproductive choice.[7]

In the late 1970's, Ron became an Associate Member of the New American Movement. While he was not active in the day to day doings of the organization, he was a generous supporter. When the New American Movement merged with the Democratic Socialist Organizing Committee, Ron Sable became a charter member of the new organization, Democratic Socialists of America. He was instrumental in forming Chicago DSA's Gay and Lesbian Branch and continued his generous support of the organization.[8]

In 1983 Ron Sable was a Chicago delegate to the Democratic Socialists of America conference in New York City, October 14-16, 1983[9]

In 1988, Dr Ron Sable served on the Board of Directors[10]of PROCAN (Progressive Chicago Area Network), an oganization which included several other prominent Democratic Socialists of America members, including Alderman Danny K Davis and Roberta Lynch.

On November 16, 1989, Ron Sable was listed as a friend of the Chicago Committee to Defend the Bill of Rights Tribute to Leon Golub and Lucy Montgomery, held at the Congress Hotel, Chicago.[11]

Madeline Talbott of ACORN was one of the key early organizers of the Chicago New Party.

She was also looking forward to meeting Ron Sable and Dan Swinney and reported that in May Dan Cantor held a New Party fund raising meeting in the Chicago home of Quentin Young, "with half a dozen good people present".[13]

In late 1993 Progressive Chicago letters were always signed by 17 people;[14]

A book, "Caring for the Uninsured and Underinsured A Better-Quality Alternative: Single-Payer National Health System Reform" was released in 1994 by the Physicians for a National Health Program Quality of Care Working Group, Contributors included;