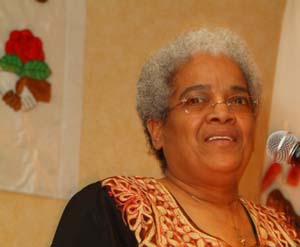 Linda Rae Murray is a Chicago based medical activist. Dr. Murray is the chief medical officer for the Cook County (IL) Dept of Public Health, a general internist who practices at a south side Chicago community health center, and on the faculty at the Univ of Illinois Chicago in the Dept of Occupational and Environmental Health.

Dr. Linda Rae Murray was born in Cleveland, Ohio on August 25, 1948. After graduating from Collinwood High School in 1966, Murray attended the University of Illinois at Chicago, earning her B.S. degree in mathematics in 1973. Murray continued her education at UIC, earning her M.D. in 1977. Following the completion of her M.D., Murray attended the University of Illinois School of Public Health in Chicago, where she earned her master's of public health in 1980. She later returned to school to continue her education in the doctoral program at the University of Michigan School of Public Health[1].

After completing her medical degree, Murray became a resident physician in internal medicine and occupational therapy at Cook County Hospital, where she remained until 1980. In 1981, she left for Bethany Hospital, also in Chicago, and in 1983, she became the medical director for the Manitoba Federation of Labour in Winnipeg, Canada. Murray returned to the United States in 1985 and began teaching at Meharry Medical College, and in 1987, she returned to Chicago to work with the Chicago Department of Health. By 1992, Murray was the medical director of the Near North Health Services Corporation, and after a series of other high-level positions, today Murray is the chief medical officer of Primary Care & Community Health: Ambulatory & Community Health Network of Cook County.

Throughout her career of practicing medicine, Murray has also been a teacher, having taught internal medicine and midwifery, among other courses. She currently serves as the attending physician at the Woodlawn Health Center[2].

In 1968, the Chicago editorial group of The Movement-a newspaper affiliated with the Student Non-Violent Coordinating Committee and the Students for a Democratic Society, consisted of[3]; 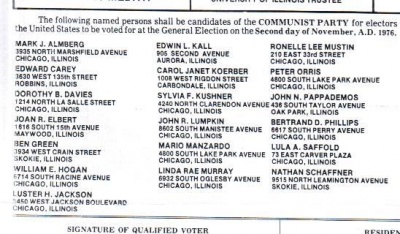 From 1981 until 1983, Linda Rae Murray was a part of the First Congressional District of Illinois Health Task Force under Harold Washington, and she returned to that role from 1985 – 1992 under Congressman Charles Hayes[6].

On November 16, 1989, Linda Murray served on the Tribute Committee for the Chicago Committee to Defend the Bill of Rights Tribute to Leon Golub and Lucy Montgomery, held at the Congress Hotel, Chicago.[7]

In 1991, Linda Rae Murray, Illinois, was one of several hundred Communist Party USA members to sign the a paper "An initiative to Unite and Renew the Party" - most signatories left the Party after the December 1991 conference to found Committees of Correspondence.[8]

In 1994 Linda Murray ,Chicago, was listed on a "Membership, Subscription and Mailing List" for the Chicago Committees of Correspondence, an offshoot of the Communist Party USA[9]

A book, "Caring for the Uninsured and Underinsured A Better-Quality Alternative: Single-Payer National Health System Reform" was released in 1994 by the Physicians for a National Health Program Quality of Care Working Group, Contributors included;

In 2000, Linda Murray served on the welcoming committee for the Chicago Memorial Service for Richard Criley, a long-time activist with the Communist Party USA and a leader of the Chicago Committee to Defend the Bill of Rights.[10]

In December 2005 Linda Rae Murray was elcted to the board of the American Public Health Association for a four year term[11]. 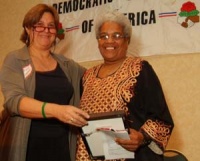 For your devotion to the extension of care to the medically indigent;
For your advocacy of universal health care as a right of all citizens;
For your service to working people in the field of occupational health and safety;
For your service to the community in the field of public health;
For your willingness to speak out against the injustices of an unequal society;
The Debs - Thomas - Harrington Dinner Committee does hereby present you with its annual award this 6th day of May, 2005.

Linda Rae Murray has received many awards, including the Daniel Hale Williams Award from the cook County Physician's Association and the Distinguished Service in the Health Field Award form the National Association of Minority Medical Educators[13].

Linda Rae Murray has addressed forums organized by the Spirit of 1848 caucus within the American Public Health Association. The Caucus is openly Marxist[14]and claims that I848 was the year of many "progressive" social advances including the writing of the Communist Manifesto[15].

At the October 2008 APHA conference in San Diego, the Medicare, Spirit of 1848, Wome's and Socialist Caucuses within APHA co-sponsored the P. Ellen Parsons Memorial Session, on “Health Access & The Elections: What Happened, What Didn’t”

Linda Rae Murray, as discussant, then spoke to the importance of not staying stuck in an overly complicated policy-wonk mode but instead appealing to people’s sense of fairness, framing health care as a human right, and making clear the current system does not work and incremental efforts at reform have made little or no difference. She also emphasized that one reason that efforts over the past 100 years have failed is that creating a system that fairly provides universal health coverage is a way of redistributing wealth, which goes against capitalist ideology, such that it requires taking this ideology head-on, noting that especially in this time of economic crisis, many people would agree that the “invisible hand of the market” is not an “all-knowing god.”

Arguing that we can point to how every other industrialized capitalist country has managed to ensure universal medical coverage, she further noted that this is only one piece, since good health is only possible in a just society, meaning that we need to bring in allies to address the broader social determinants of health.

In November 2009 Linda Rae Murray, a 30-year member of American Public Health Association —-the largest and most diverse public health organization in the world, was elected president of the organization on a platform that stated;

“If we are going to make progress toward a healthy nation we have to overcome those issues which divide us: issues of racism, immigrant rights, gender discrimination and workers’ rights. It is only through unity that we will have the strength to make the changes our country needs.”

If we are going to make progress toward a healthy nation we have to overcome those issues which divide us; issues of racism, immigrant rights, gender discrimination and workers’ rights. It is only through unity that we will have the strength to the changes our country needs.

APHA must continue to be a consistent voice for the fundamental mission of public health and stand firm for our basic principles: