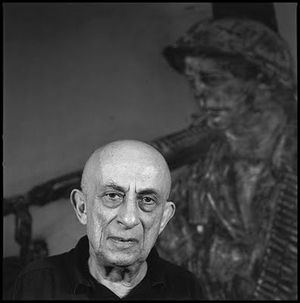 A WW II Army veteran, Golub studied at the Art Institute of Chicago and lived in Paris before moving to New York in 1964. Golub, whose paintings were often antiwar, taught at the School of Visual Arts in Manhattan and Rutgers University[1].

On November 16, 1989, the Chicago Committee to Defend the Bill of Rights held a tribute to Leon Golub and Lucy Montgomery, held at the Congress Hotel, Chicago.[2]

In August 2004 Leon Golub an artist endorsed an anti “Bush Team” Protest at the Republican National Convention in New York, organized by Not In Our Name, an organization closely associated with the Revolutionary Communist Party[3].