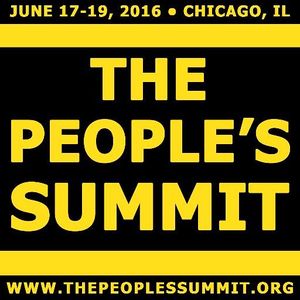 Template:TOCnestleft The People's Summit is an annual socialist conference. The conference seeks to "build power" by "further deepening the relationship between participating organizations rooted in principled anti-corporate politics, development of community leaders, direct action not based on partisan identification, and strategic organizing..."

"The Summit itself will include plenary and workshop sessions devoted to key issues such as the Fight for 15, mass incarceration and criminal justice reform, voting rights and expanding democratic participation, a tax on Wall Street speculation to fund human needs and jobs, climate justice toward a sustainable economy, improved Medicare for All, the fight for free and debt-free higher education, secure retirement through expanding social security, ending HIV/AIDS, achieving Constitutional pay equity for women, and ending deportations and support for DREAMers, among others.""[2] 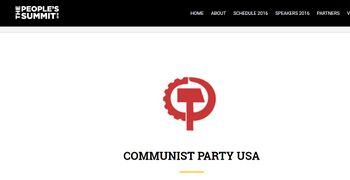 Communist Party USA was a sponsor of the People's Summit in 2016; Image from Cached version of http://www.thepeoplessummit.org/sponsor/communist-party-usa/