Maxine Phillips came to activism through the Civil Rights Movement.

The flickering images on the small television screen brought the brutal beatings of Freedom Riders into our living room. I was 14, living in central Pennsylvania and ready to join the noble cause. My parents approved, in theory, but two years later, they were too scared to let my brother and me get on the bus to the March on Washington. I didn't hear Martin Luther King in person until a year before his death. . . When a college classmate asked me in 1967 to take part in Vietnam Summer, I said that I only wanted to focus on civil rights. Had I heard about King's speech at Riverside Church? he asked. If we didn't stop the war, we couldn't expect progress on civil rights. I was in. King's interconnected vision carried me from sweltering vigils on the steps of the Pennsylvania state capitol building to further activism. [2]

Maxine Phillips, a Liberal Democrat was converted to socialism by Michael Harrington's lectures to her Catholic Worker group.[3]

In 1977, John Cort attended the Democratic Socialist Organizing Committee convention in Chicago. At the convention Cort and others organized a DSOC Religion and Socialism Committee (later Commission). Cort was elected coordinator and editor of the newsletter.

In 1984 Democratic Socialists of America executive director was Maxine Phillips[5].

In 2000, the Democratic Socialists of America Religion & Socialism Commission consisted of[9];

Religious Socialism is the journal of the Religion and Socialism Commission of Democratic Socialists of America.

In the late 2000s it was edited by Andrew Hammer. Contributing editors were Maxine Phillips, Harvey Cox, Cornel West and Michael Eric Dyson[10].

Maxine Phillips signed an April 2003 Statement on Cuba, initiated and circulated[11] by prominent Democratic Socialists of America (DSA) member Leo Casey, calling for the lifting of trade sanctions against Cuba.

“a statement circulating among democratic left/socialist folks, largely by members of Democratic Socialists of America, condemning the recent trials and convictions of non-violent dissenters in Cuba”.

The petition criticized Cuba's poor human rights record, but shared the blame for Cuba's problems with reactionary elements of the U.S. administration...

The democratic left worldwide has opposed the U.S. embargo on Cuba as counterproductive, more harmful to the interests of the Cuban people than helpful to political democratization. The Cuban state's current repression of political dissidents amounts to collaboration with the most reactionary elements of the U.S. administration in their efforts to maintain sanctions and to institute even more punitive measures against Cuba.

Many of the petition's 120 odd signatories were known members of DSA.

Democratic Socialists of America Vice-Chairs in 2009 were;

On June 30, 2009, Boston Democratic Socialists of America presented its annual Debs-Thomas-Bernstein Award to Professor, author, and health care reformer Rashi Fein, along with the winners of a union election at St. Elizabeth’s Medical Center in Brighton, accepted by Sonia Marshall, the key organizer of the campaign. Sheila Decter of the Jewish Alliance for Law and Social Action presented the award to Rashi Fein. The event was held at the home of Marcia Peters and David Karaus. Mike Fadel of SEIU Local 1199 (formerly Boston DSA staff person) and the AFSCME-affiliated New England Organizing Project were benefactors of the event.[13][14]

Maxine Phillips was a supporter of the event.

Maxine Phillips was a supporter of the event.

The Center for Democratic Values (CDV) was launched[17]at the 1995 Democratic Socialists of America National Convention as a means of contesting the current hegemony of capitalist ideas.

By 1997 CDV network members Ron Aronson, Nelson Lichtenstein, Harry Brod, Maxine Phillips, Rick Perlstein, Anna Marie Smith and Skip Oliver were all publishing op-ed pieces for the Progressive Media Network and local newspapers. Topics include arts funding in schools, the Teamsters election, the meaning of Clinton's reelection for women, and the use of polls in elections.

Maxine Phillips was a New York Democratic Socialists of America delegate to the DSA 2015 National Convention.[19]

In 2015, Democratic Socialists of America founded a new version of Religious Socialism.

We invite you to join us in making it useful both to people of faith within DSA and to the wider religious left.

The Editorial group consisted of;

Maxine Phillips is a former co-editor of the print edition of "Religious Socialism" and current volunteer editor of "Democratic Left." She has been an active member of Judson Memorial Church in New York City for more than forty years.[20] 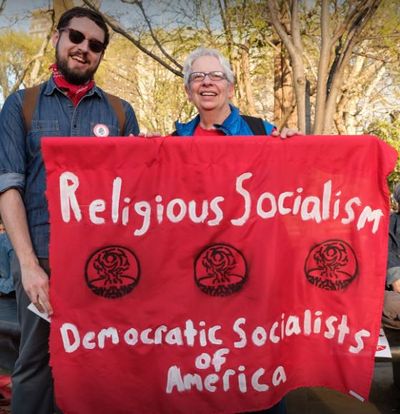 I became active politically through the civil rights and anti-war movements of the sixties and was involved with the National Welfare Rights Movement in the late sixties and early seventies. My mother came from Italy as a child, and my dad voted for Norman Thomas, my grandfather for Eugene Debs. Neither parent was particularly political, but we were always the most “liberal” in the room in our conservative Pennsylvania community. I was brought up in the Methodist church and, since coming to New York, have been active in Judson Memorial Church, which for decades has been in the forefront of social change and cutting-edge arts. When abortion was illegal, Judson developed a network of clergy who would find safe abortions for women. It is currently home to the New York New Sanctuary Coalition and has been involved in immigrant rights work for the last ten years. It was through a discussion group on corporate capitalism held at Judson that I learned about the Democratic Socialist Organizing Committee, which I joined in 1977.

Starting in 1977, I was active in the New York local of DSOC and became involved with the national Religion and Socialism Commission as one of the editors of its quarterly newsletter. I edited the local newsletter as well, and in 1978 was hired on national staff as managing editor of “Democratic Left” (Michael Harrington was the editor although he did no editing, only writing). After the merger with the New American Movement I became one of four national directors and eventually became National Director. I left in 1985 after my first child was born and became managing editor of “Dissent” magazine, retiring from the post of executive editor there in 2013. Between 1985 and now, I continued to work with the Religion and Socialism Commission and served on several search committees for DSA as well as the board of the DSA Fund. I was on the NPC from 2013 to 2015, and did not run at the last convention because of other commitments that have now ended. I’ve been on the Personnel Committee for a couple of years. I revived the Religion and Socialism publication as a website and have served as a volunteer editor of “Democratic Left” since early 2014. I have brought more diverse voices to both publications. I volunteer with a weekly clinic run by the New Sanctuary Coalition to help immigrants navigate the system and consider that I do this both as a member of Judson Church and as a DSA member. The New York Immigration Justice group is active with the New Sanctuary Coalition.[22]

May 12th and May 13th, 2017, NYC-DSA will host a Socialist Day School that will investigate the influence these historical movements have on our current moment and what lessons we can learn as activists and organizers fighting for socialism today.