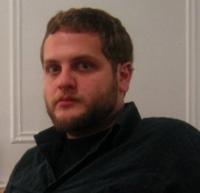 Jonathon Feinberg works in Organizing and Development at New Lynn Coalition. Lives in Lynn, Massachusetts. He is a member of the band Tigerman Woah. Close to Adam Lentine, and Adam Kaz.

Works in sales at Guitar Center. Grew up in Atlanta Georgia.

In a relationship with Rebecca Hornstein.

He is a member of Liberation Road.

Jonathon Feinberg began working with the New Lynn Coalition as a volunteer and later researcher while studying community controlled development for a Master’s Degree from Tufts University in Urban and Environmental Policy and Planning. Since moving to Lynn in 2011, he has been a member of Neighbor to Neighbor, the Highlands Coalition, and the North Shore Labor Council. Jonathon has also worked for Neighbor to Neighbor on the 2015-16 Raise Up Massachusetts campaign, and for IUE/CWA Local 201 as an internal organizer. He was honored to serve as the volunteer campaign director for Marven Hyppolite for Ward 5 City Council in the 2017 municipal elections, a campaign that lost by less than 100 votes but contributed to a rising progressive wave in local politics. Jonathon is a homeowner and landlord in Lynn, and is a musician with a Lynn-based rock and roll band with some regional acclaim. He holds a Bachelor's Degree in Environmental Studies from Oberlin College, a Certificate in Environmental Policy from UMass Dartmouth, and a Masters of Arts in Urban and Environmental Policy and Planning from Tufts University. He was also a fellow of the Jewish Organizing Institute and Network. Jonathon was hired by NLC as a part-time organizer in 2016 and promoted to Organizing Director in late 2017.[1]

"Understanding and Confronting Anti-Semitism" was posted on the Freedom Road Socialist Organization website in April 2019. This post was written by Jonathon Feinberg, and edited by Rebecca Hornstein. Jonathon grew up Jewish in the south, and now works as a labor and community organizer building working-class power in Massachusetts. Rebecca is an experienced labor, community, and Jewish anti-occupation organizer now training to be a Rabbi. Both are deeply inspired by an ongoing history of Jewish movements against fascism and for socialism and self determination for all people. 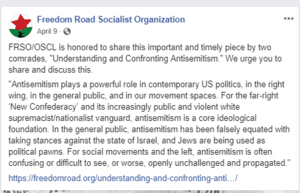 Antisemitism plays a powerful role in contemporary US politics, in the right wing, in the general public, and in our movement spaces. For the far-right ‘New Confederacy’ and its increasingly public and violent white supremacist/nationalist vanguard, antisemitism is a core ideological foundation. In the general public, antisemitism has been falsely equated with taking stances against the state of Israel, and Jews are being used as political pawns. For social movements and the left, antisemitism is often confusing or difficult to see, or worse, openly unchallenged and propagated.

This piece comes out of a process to make sense of the brutal attack on a Pittsburgh synagogue by white nationalist Robert Bowers on October 27, 2018. Bowers attacked a synagogue because he believed that these congregants’ refugee aid work presented a dire threat to white society. Originally setting out to convey difficult emotions and call for support and unity around the slaughter of 11 praying congregants, research and further conversation with comrades and the NEC pushed us to offer an analysis of contemporary antisemitism in our political context, and why we as FRSO should confront it.[2]

Those indicating they would attend, on Facebook included Jonathon Feinberg.[3]

Those saying they would attend, on Facebook included Jonathon Feinberg.[4]

Beyond Shell Shock: Labor after the Trump disaster was hosted by Freedom Road Socialist Organization, Sunday, February 26 at 8 PM - 9:30 PM.

Join us in this webcast to take a hard look at the place we're in as a labor movement - and consider how we can make the labor movement be a leading force in the resistance to Trump and the fight for a better world.

What's our strategy? What kinds of alliances do we need? Do we just play defense?

In the face of National Right to Work, vicious attacks on workers of color in and out of the workplace, escalating divisions in the AFLCIO and the Democratic Party, and more we've got our work cut out for us. Let's figure out how to win. 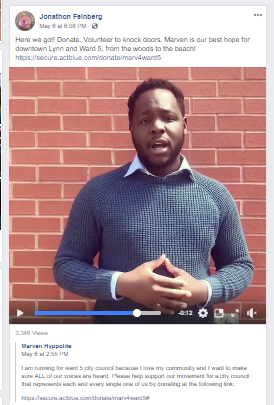 Jonathon Feinberg May 6 2019: Here we go!! Donate. Volunteer to knock doors. Marven is our best hope for downtown Lynn and Ward 5, from the woods to the beach! https://secure.actblue.com/donate/marv4ward5

Marven Hyppolite May 6 at 2:55 PM I am running for ward 5 city council because I love my community and I want to make sure ALL of our voices are heard. Please help support our movement for a city council that represents each and every single one of us by donating at the following link: 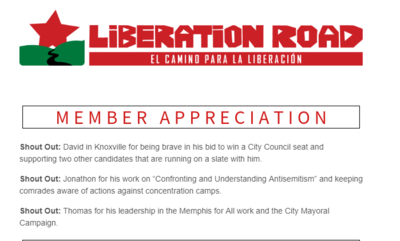 Jonathon Feinberg is a member of Liberation Road.