In the wake of this year’s protests, the members urged the administration to support the Cuban people by suspending U.S. regulations that prevent food, medicine, remittances, and other humanitarian assistance from reaching the Cuban people...

REBALANCING THE SUPREME COURT: WHY PROGRESSIVES MUST TAKE BACK THE [STOLEN] COURT TO SAVE OUR DEMOCRACY Plenary; Fri, 10/08/2021 - 05:00pm (Eastern)

When Republicans stole two Supreme Court seats in an unprecedented power grab, progressives knew our most basic rights were at risk—and that expanding the Supreme Court was the necessary solution. In less than a year since the GOP seized a supermajority on the high court, our fears have come true: The right-wing court has gutted the Voting Rights Act and allowed Texas to ban abortion and place a bounty on the heads of doctors and others who help women exercise their rights.

The Republican Party has controlled the Supreme Court for more than 50 years, despite losing the popular vote in 7 of the last 8 presidential elections. And it uses the Court to govern via minority rule, rigging elections to help them win despite popular opposition, and legislating from the bench when they lose. It’s no surprise that new polling shows job approval for the Supreme Court at an all-time low, with a majority of Americans disapproving of the Supreme Court.

The need for reform is undeniable — and progressives are meeting the moment. Earlier this year, House Judiciary Committee Chairman Jerrold Nadler, Courts Subcommittee Chairman Hank Johnson, Rep. Mondaire Jones, and Sen. Ed Markey introduced the Judiciary Act of 2021 to rebalance the court by adding four seats. The bill now has dozens of cosponsors and the Senate bill is supported by progressive champion Sen. Tina Smith of Minnesota, and more than 80 organizations have announced their support for court expansion.

Co-hosted by Take Back The Court Executive Director Sarah Lipton-Lubet and Rep. Mondaire Jones, this keynote panel featuring Sen. Tina Smith will discuss the urgent need to rebalance the stolen Supreme Court in order to protect democracy and preserve the essential rights of all Americans. You’ll also hear from Rep. Barbara Lee, who will speak about this critical intersection between protecting our democracy and passing progressive policy, with a special welcome from Netroots Nation Board Member Arshad Hasan.

In 2020 Hannah Nayowith was Campaign Manager Mondaire for Congress.

Our Revolution is joining with the Declaration for American Democracy to host a Freedom to Vote Town Hall! - a special edition of our Monday Night Organize to Win Broadcast - featuring US Sen. Jeff Merkley and US Rep. Mondaire Jones. 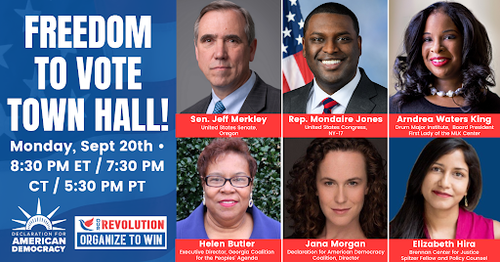 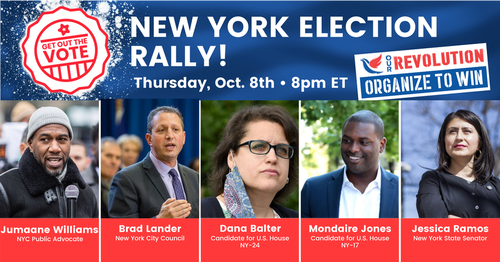 The People's Charter was released by the Working Families Party shortly before the 2020 election. 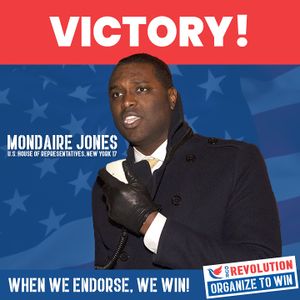 In 2007 Hershey Avula and Mondaire Jones ran as a ticket for ASSU president and vice-president respectively. They won.

Matthew Sprague The Stanford Review. "The release of the 2007-2008 Hershey Avula / Mondaire Jones ASSU Executive financial records raises questions about the personal integrity of our elected representatives and draws much needed scrutiny to the systems in place to prevent wasteful and unethical spending.

It is not a stretch of the imagination to wonder whether the Avula/Jones slate improperly used ASSU Executive funds for their personal expenditures. The sheer magnitude and patterns of food and gas purchases certainly suggest this, as does testimony from former ASSU officials regarding certain situations in which ASSU credit cards were used.

tanford may never know for certain to what extent these expenditures were inappropriate uses of “discretionary” money, but what is evident at the very least is the staggering waste of funds by the Executive during their tenure. To think that $50,000 of the ASSU Executive budget went toward paying cabinet members, ASSU Executive salaries, and padding pockets with burritos (and BBQ, to boot), is an alarming and disappointing legacy.

Even more disappointing is the Executive’s use of $2,500 in funds (also for food) from the “Collaboration Initiative” and “ASSU Shuttle” accounts. These expenses were incurred on the April 1st credit card payment, at which point the “General Discretionary” account had been emptied. It appears that the Avula/Jones slate proceeded to fund their spending behavior with other accounts, at the loss of the student body.

Though an investigation into these expenditures last year was unable to determine whether the behavior constituted a violation of the Fundamental Standard (primarily because of the length of time that had elapsed), it is nonetheless important that the Stanford student body know the truth about the financial records of the Avula/Jones presidency. "[3]