The Fight For Our Future 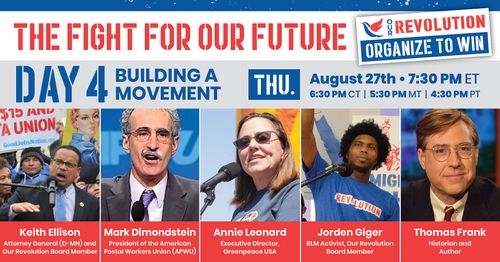 A "meet and greet" was held at the office of the American Postal Workers Union July 13, 2015 between more than 40 U.S. labor leaders and Sen. Bernie Sanders, I-VT, who is running for president.

"Bernie Sanders has been an outspoken champion of postal customers, postal workers and the public Postal Service - demanding expanded services for all Americans, an end to mail delays, and an end to the closure of postal facilities," said APWU President Mark Dimondstein.

"And he has been a forceful advocate for working people for decades. He's not in the pocket of big corporations. We thought it was important to hear his ideas about the 2016 campaign - especially how he plans to take on the big-money interests that are strangling our political system and our economy.

"There has been tremendous interest and excitement about his campaign in the labor movement," he said.

The meeting at APWU's office was co-hosted by former president of the Communications Workers of America Larry Cohen, APWU President Mark Dimondstein and APWU Secretary-Treasurer Elizabeth Powell. Neither the APWU nor the CWA has endorsed a presidential candidate in 2016. Both unions are affiliates of the AFL-CIO.[1]

“The time has passed when we can passively settle for the lesser of two evils,” reads the main political resolution passed December 2017 by AFL-CIO convention delegates. Lee Saunders, chair of the AFL-CIO’s political committee and president of AFSCME, and Randi Weingarten, president of the American Federation of Teachers, introduced the resolution. They lead the labor federation’s two largest unions. Convention managers yoked the resolution to another measure it also approved discussing a labor party, though not by name.

The two measures, adopted October 24, followed a late Monday-evening meeting of supporters of reviving the Labor Party idea. It attracted about 50 delegates to an upstairs meeting room at the convention’s lead hotel. Their contention: Both the Democrats and the Republicans are under corporate domination.

The prime mover of a Labor Party motion at the convention, Postal Workers President Mark Dimondstein, has been calling for such a new formation since the passage of NAFTA in 1993, which he said showed both Democrats and Republicans were in the pockets of the corporate class.

Dimondstein made many of the same arguments for a Labor Party on the convention floor that he voiced in the meeting the night before, when Baldemar Velasquez of the Farm Labor Organizing Committee, Mark Dudzic of Labor Committee for Single Payer, and Donna DeWitt, former president of the South Carolina AFL-CIO, joined him.

Meeting participants differed over whether the nascent party should first build an organization and concentrate on issues, or get into political races, running the risk of becoming “spoilers” in the current political system, rigged in favor of the two existing parties.[2]

As at April 2005, the following served as chairs on the National Council of the Labor Party:[3]