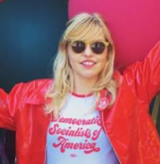 Jen Snyder is San Francisco activist. She is an electoral organizer, proud socialist and feminist in SF. She was the campaign manager of Prop F, the right to counsel measure we won for all tenants facing eviction, and she was the consultant on Prop C which taxes the largest corporations (screw you Twitter!) in SF to house the homeless. Currently she works on Dean Preston’s Campaign for Supervisor, an endorsed DSA member running in the 2019 election. She was a member of the DSA SF organizing committee when the chapter began, a member of its first steering committee, founded the Homelessness Working Group and Socialist Feminism Working Group and currently chairs the Housing Committee.[1]

Jen Snyder was Campaign manager at Dean Preston for Supervisor.

Does this show what a religious experience organizing is for me? — with Dean Preston, Norman Degelman, Leslie Gray, Dean Preston for Supervisor, Avery Yu and Jackie Prager.

In 2019 Jen Snyder, Jennifer Bolen and Darby Thomas ran for Democratic Socialists of America NPC on the San Francisco slate.[3]

4 days at the Democratic Socialists of America national convention. Super indescribable sorry, but: Nationally, and with 55 thousand members and counting, and hundreds of chapters across the country, we are building the vision for a socialist alternative to capitalism. Whenever you’re ready, or whenever the choice comes down to socialism or barbarism, come join us. — with Jennifer Bolen and Thompson Darcy in Hapeville, Georgia.

In August 2018, Jimmy Tobias from The Nation quoted Allison Hrabar as a participant in the Metro DC Democratic Socialists of America campaign: "Stomp Out Slumlords", which would fight landlords who want to evict their tenants. Their vision "is to make dignified housing a universal human right, rather than a commodity, just as Medicare for All proponents hope to do with health care."[5] “We decided to go to the courthouse and pull all of the dockets and start canvassing tenants facing eviction,” says Margaret McLaughlin, the chair of the Metro DC Democratic Socialists of America chapter. “The court system is mostly working right now as a conveyor belt to evict people,” says Allison Hrabar, a member of the chapter’s steering committee. “We are throwing a wrench in that system.”

“DSA members were the vast majority of the canvassers and door knockers,” says SF DSA’s Jen Snyder, who was the campaign manager for Proposition F. “We were the main driving volunteer force, we were the campaign staff, the campaign office was the DSA office.”

It’s "also a powerful way to organize a political base," explains Cea Weaver, a member of New York City Democratic Socialists of America’s steering committee as well as its housing working group. “As socialists, our goal is to build working-class power—whether at the polls, in our homes, or in our workplaces. New York tenants are a millions-strong constituency that cuts across lines of race, class, gender, and age. Many of us may vote as workers, students, or parents, but if we unite as tenants, we represent an unstoppable political force.”

"The Metro DC Democratic Socialists of America started sending out 10 to 20 volunteer canvassers each weekend to do long days of door-knocking at rental units across the city. They hit roughly 200 doors on any given weekend, encouraging tenants to defend themselves from eviction."

According to an "operations manual,"[6] their "strategy is to make it as difficult as possible to wield eviction as a weapon by raising the costs of evicting a tenant and flooding the channels that permit and carry out evictions."

"A DSA working group in Washington, D.C. has identified a strategic chokepoint that will allow us to effectively challenge the city’s landlords: landlord-tenant court, the institution responsible for evictions. The power and profit of landlords always depends on eviction: housing can only be a commodity as long as owners have the right to deny shelter to people who do not pay. Our strategy is to make it as difficult as possible to wield eviction as a weapon by raising the costs of evicting a tenant and flooding the channels that permit and carry out evictions. Poor tenants have the latent power to clog the machinery of displacement, and we have developed a program to unlock that power."

Early 2018, The No Eviction without Representation hired Nora Belrose to organize with the campaign on staff.

That makes the SF Right to Counsel Committee an all-comrade cast with Jen Snyder, Nora Belrose, and Dean Preston all members of DSA SF.[7]