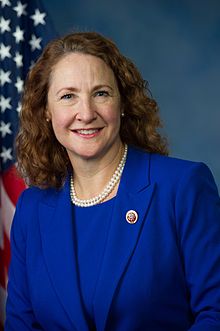 Elizabeth Esty , entered Congress with the 2012 elections, as an (Connecticut Democrat, District 5).

She was formerly a State Representative from Connecticut.

Elizabeth Esty wrote a letter of support to the Council on American-Islamic Relations (CAIR) on the occasion of their 24th anniversary in September 2018.[1]

In late 2009, Elizabeth Esty was one of more than 1,000 state legislators to sign a letter entitled "State Legislators for Progressive Health Care Reform". The letter was a project of the Progressive States Network and was developed in consultation with national health care reform advocates, including the AFL-CIO, AFSCME, Community Catalyst, Families USA, Herndon Alliance, National Women's Law Center, Northeast Action, SEIU, and Universal Health Care Action Network. The letter reads in part,[2]

Powered by the grass-roots efforts of union members who made phone calls, knocked on doors, talked to their co-workers and attended Get Out The Vote events, labor-endorsed candidates swept to victory in the Nov. 6 election.

The list starts with President Barack Obama and Chris Murphy -- who withstood Linda McMahon's $47 million effort to buy the 2012 U.S. Senate seat -- and Elizabeth Esty, who defeated the well-funded campaign of Republican Andrew Roraback in the 5th Congressional District.

"This was a victory for the middle class," said Council 4 Executive Director Sal Luciano. "Our members refused to allow corporations and right-wing billionaires to buy the election and ram through their extremist, anti-worker agenda. I am proud and grateful for everyone's effort."

In the House, Esty is seen as a leading voice of her Sophomore class. She serves on the Science, Space and Technology Committee and the Transportation and Infrastructure Commiteee. Esty spent time in Israel as a student studying foreign relations and is deeply supportive of a two-state solution.[5] 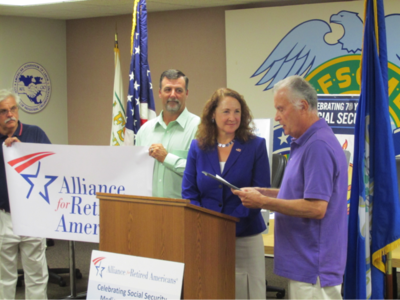 Today, the National Alliance for Retired Americans announced their endorsement of Elizabeth Esty for Connecticut’s 5th Congressional District. The endorsement was announced at a celebration of Social Security’s 79th anniversary at the AFSCME Council 4 office in New Britain. The Alliance for Retired Americans represents over 4.3 million retirees and community activists across the country, including more than 72,000 in Connecticut.

“Elizabeth Esty’s strong positions on fighting Social Security and Medicare privatization and strengthening Social Security and Medicare confirm her commitment to improving the quality of life for older Americans,” said Richard Fiesta, Executive Director of the National Alliance for Retired Americans. “Her leadership on issues such as preserving and protecting Social Security and Medicare from privatization and benefit cuts ensures these programs will be around for current and future generations. Alternatively, Elizabeth Esty’s opponent, Mark Greenberg, supports House Budget Committee Chairman Paul Ryan’s budget initiatives like ending Medicare as we know it, dramatically cutting Medicaid, and creating a fast-track procedure for cuts to Social Security – all while keeping the Bush tax cuts and tax breaks for the wealthiest Americans and corporations. Mark Greenberg’s support for privatizing the Medicare program would dramatically increase out-of-pocket costs for seniors’ health care and put insurance companies in control of care.”

“I’m honored to receive the endorsement of the National Alliance for Retired Americans today,” said Elizabeth Esty. “It’s wrong to balance the budget on the backs of our seniors. Seniors have earned these benefits after lifetimes of hard work, and they deserve to know they’ll be there for their retirement security and for their children and grandchildren’s future. Unlike my opponent Mark Greenberg who wants to privatize Social Security and voucherize Medicare, I’ll continue to stand up against any attempts to cut or dismantle these lifeline programs.”[7]

In the 113th Congress, 50 members of the House of Representatives belonged to the New Democrat Coalition, including:[8]

Members of Connecticut’s congressional delegation joined demands for a special prosecutor to oversee the investigation of Russian influence on the 2016 election after President Donald Trump fired James Comey as FBI director Tuesday May 9, 2017.

“Not since Watergate have our legal systems been so threatened, and our faith in the independence and integrity of those systems so shaken,” Blumenthal said.

Rep. Jim Himes, D-4th District, who sits on the House Intelligence Committee, which is conducting its own investigation into possible ties with Russia, said , “The White House cited Director Comey’s handling of the investigation into Secretary Clinton’s emails as the reason for the firing, but many will be rightly skeptical of that explanation.”

“Whatever the merits of Director Comey’s decisions, the investigated has just fired the investigator,” Himes said. “That should never have occurred prior to the full and complete insulation of the FBI’s investigation through the appointment of an independent prosecutor and other measures.”

“I will do everything in my power to ensure that this irresponsible move doesn’t end the necessary work law enforcement is conducting to discover the truth about Russia, its interference in our democracy and any and all who might be complicit,” Himes said.

“No matter the mistakes that Director Comey has made, the timing of his firing clearly suggests that President Trump is trying to influence or upend the FBI’s investigation into his campaign’s possible collusion with a foreign government,” Murphy said Wednesday morning.

“The president’s continued refusal to support the appointment of a special prosecutor would confirm America’s worst fears about the motivation for Comey’s firing,” Murphy added.

U.S. Rep. Joe Courtney, D-2nd District, said the firing of Comey while he was “spearheading” the Russia investigation “does not pass the smell test.”

“It is painfully clear that we need an immediate and independent investigation of all aspects relating to Russia’s meddling in our election. We need a review that the American people can have faith in,” Courtney said.

Courtney said the fact that Trump’s action was recommended by Attorney General Jeff Sessions, whom he called “a political appointee who barely survived confirmation in the Senate,” raised more doubt about the motives behind the firing.

Rep. Elizabeth Esty, D-5th District, said the White House has shown a “corrosive pattern of disinformation and obstruction” over the last four months, which has “impeded the public’s ability to determine the full truth” about possible Russian interference.

“The only solution that will restore public trust is for Congress to appoint a special prosecutor to conduct an independent investigation,” Esty said Wednesday morning.

Rep. John B. Larson, D-1st District, said demanding an independent investigation should not be a partisan issue.

“The firing of FBI Director James Comey should renew every American and every member of Congress’s call for an independent investigation into Russian involvement,” Larson said.

Rep. Rosa DeLauro, D-3rd District, said the White House must provide “an urgent and thorough explanation” for its decision, given the ongoing FBI investigation into Russian interference.

“These events further underscore why I have continued to demand an independent commission with subpoena power in order to get to the bottom of the Russia investigation,” DeLauro said Wednesday morning.[11]