James (Jim) Langevin is a Member of Congress from Rhode Island.

2006 letter to Condoleezza Rice on Colombia

Alleged Colombian Army killings prompted Fellowship of Reconciliation to work with Representative Sam Farr to forge a response that would impact the 17th Brigade, the unit allegedly responsible for the violence against San José de Apartadó and communities throughout northwestern Colombia.

As a result, Reps. Sam Farr and Jim McGovern, wrote a letter to their colleagues in Congress urging them to join in calling on Secretary Condoleezza Rice to cut funding for the Colombian military.

We applaud the decision, noted in your certification letter of August 2005, that the US "will not consider providing assistance to the 17th Brigade until all significant human rights allegations involving the unit have been credibly addressed." Because the Brigade is a component of the Colombian Armed Forces' command structure and has been implicated in the above referenced human rights violations, we implore you to abide by both the letter of the law and the spirit of the law by withholding human rights certification for Colombia until the following conditions are met:

From November 6th through December 7th 2009, a letter calling for change in U.S. policy towards Colombia was circulated through the House of Representatives. This letter called for a decrease in U.S. aid for Colombia's military and an increase in support for human rights and humanitarian efforts. The initiators of this letter were —Representatives James McGovern, Jan Schakowsky, Donald Payne, and Mike Honda.

The FY 2011 budget will contain the twelfth year of a major aid package to Colombia—an aid package originally slated to phase out after six years.

After eleven years, it is time to scale down assistance for Colombia's military and more systematically "Colombianize" such programs, within both the State Department and Defense Department budgets.

On March 14, 2013, Rep. Jared Polis (D-CO) and Rep. Matt Cartwright (D-PA) have introduced the Bringing Reductions to Energy’s Airborne Toxic Health Effect (BREATHE) Act, and the Focused Reduction of Effluence and Stormwater runoff through Hydraulic Environmental Regulation (FRESHER) Act, in order to ensure that the hydraulic fracking industry follows the same rules that other industries do in preserving our natural resources. This legislation is focused on ensuring the safety and the health of the communities where the hydraulic fracturing, or fracking, process is already taking place.

The BREATHE Act would ensure that we close the oil and gas industry’s loophole to the Clean Air Act’s aggregation provision, in addition to adding hydrogen sulfide—a chemical associated with nausea, vomiting, headaches, and irritation of the eyes, nose, and throat—to the Clean Air Act’s federal list of hazardous air pollutants.

Due to your action/emails/phone calls we have 59 signatures from House representatives urging President Obama to support travel to Cuba by granting general licenses for ALL current categories of travel.

By eliminating the laborious license application process, especially for people-to-people groups, that is managed by the Office of Foreign Assets Control (OFAC), the majority of the bureaucratic red tape that holds up licensable travel to Cuba would disappear and actually facilitate what the President wanted to see in 2011, liberalized travel regulations.

In 2013 Progressive Democrats of America assigned activists to deliver their material to almost every US Congressman and several Senators. Jeremy Rix, was assigned as contact for Rep. Langevin.[6]

The Alliance for Retired Americans endorsed Jim Langevin in 2012.[7] 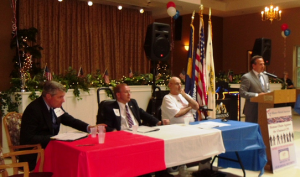 “Worker and Community Speak Out for Good Jobs.."

Congressmen Jim Langevin and David Cicilline are among those expected to attend a “Worker and Community Speak Out for Good Jobs and Quality Care at Lifespan” rally to be held at Our Lady of the Rosary Church on Benefit St on Saturday, January 17 2015.

According to a press release from Jobs with Justice, “Lifespan is investing tens of millions of dollars into Epic, a new system of electronic patient records. But tensions are rising over workers' rights and patient care issues just as Lifespan is moving to train employees and go live with Epic at Rhode Island Hospital.”

“The community stands with RI Hospital employees in their campaign for Good Jobs & Quality Patient Care at Lifespan and RI Hospital,” said Jesse Strecker, Executive Director of Rhode Island Jobs with Justice. “As a non-profit institution, Lifespan has a responsibility to ensure that its decisions put people first. Unfortunately, management at RI Hospital has decided that paying their top ten executives more than $16 million is a higher priority than making sure that the hospital has adequate staffing, and that employees have job security, fair wages, and a safe retirement.”[9]

Rally To Save Our health Care

January 2017, U.S. Senators Jack Reed and Sheldon Whitehouse and U.S. Representatives Jim Langevin and David Cicilline will join with Rhode Island workers, seniors, families, and health experts for a rally to prevent the dismantling of America’s health care system and the rush to gut the Affordable Care Act.

The members of the state’s Congressional delegation will join with citizens from across the state in speaking out against Republican budget proposals that would deprive millions of Americans of affordable health insurance and severely undermine Medicare and Medicaid.

The event will take place on Sunday, January 15 at the Johnston Senior Center. The speaking program will begin at 1 p.m.

The event was hosted by Rhode Island Jobs with Justice.[10]