Michael Quigley is a Democratic member of the United States House of Representatives, representing the 5th district of Illinois.

Michael Quigley wrote a letter of support to the Council on American-Islamic Relations (CAIR) on the occasion of their 24th anniversary in September 2018.[1]

From November 6th through December 7th 2009, a letter calling for change in U.S. policy towards Colombia was circulated through the House of Representatives. This letter called for a decrease in U.S. aid for Colombia's military and an increase in support for human rights and humanitarian efforts. The initiators of this letter were —Representatives James McGovern, Jan Schakowsky, Donald Payne, and Mike Honda.

The FY 2011 budget will contain the twelfth year of a major aid package to Colombia—an aid package originally slated to phase out after six years.

After eleven years, it is time to scale down assistance for Colombia's military and more systematically "Colombianize" such programs, within both the State Department and Defense Department budgets.

Campaign to Make Immigration Reform a Top Issue in 2010

On October 13 2010 , immigration activists from around the country gathered to join in a vigil and rally in front of the U.S. Capitol in Washington, DC., where Congressman Luis V. Gutierrez and other elected officials launched a new push for comprehensive immigration reform, building to the opening months of 2010. their banners read “Reform Immigration FOR Families” and “Family Unity Cannot Wait.”

More than 750 people traveled to Washington on buses from up and down the Eastern seaboard and as far away as Texas, Florida, Ohio, Minnesota, and Michigan. They spent Tuesday morning meeting with Congressional offices before being joined by thousands of people from the D.C., Maryland, and Virginia area, who gathered on the grounds of the U.S. Capitol to listen to testimonies from families, veterans, and children who face family disintegration because of immigration laws and deportation.

Religious leaders from a diverse array of faith traditions around the country, some organized through Familias Unidas, added their voices.

At the event Congressman Gutierrez outlined a set of principles for progressive immigration reform that needs to include a rational and humane approach to legalize the undocumented population, to protect workers’ rights, to allocate sufficient visas, to establish a smarter and more humane border enforcement policy, to promote integration of immigrant communities, to include the DREAM Act and AgJOBS bills, to protect rights guaranteed by the Constitution, and to keep families together.

In 2013 Progressive Democrats of America assigned activists to deliver their material to almost every US Congressman and several Senators, Bill Bianchi, was assigned as contact for Rep. Quigley.[5]

The 2015 Bill H.R. 1534 would reduce the number of nuclear-armed submarines operated by the Navy, to prohibit the development of a new long-range penetrating bomber aircraft, to prohibit the procurement of new intercontinental ballistic missiles.

On May 7, Chicago DSAer Tom Broderick took part in two press conferences and rallies focusing on Fast Track and the secretive trade agreements such as the Trans Pacific Partnership and the Transatlantic Trade and Investment Partnership. The latter is also called the Trans Atlantic Free Trade Agreement.

The first press conference was called by Representative Daniel Lipinski (D-3) and District 7 Steelworkers. Rep. Lipinski has taken a strong stand against Fast Track and the secretive trade deals. Joining him were Representative Robin Kelly (D-2) and an aide from the office of Representative Danny Davis (D-7).

Later that day there was a "Don't Walk Out On Illinois Jobs" rally and press conference in Rep. Mike Quigley's District (D-5). This event was called by the Communications Workers of America (CWA). Rep. Quigley is the true Democratic Party hard ass when it comes to Fast Track and the trade agreements. He says he fully supports his President. He does not want to let China be a leader in Asia and if we don't want to lose out, we'll have to take the lead.

He obviously doesn't care about the jobs lost in his District thanks to NAFTA, CAFTA and KORUS. As part of the rally, we brought shoes that we left outside his office. Rep. Quigley was not in the office when we were there. In addition to the CWA, members of IIRON, Food and Water Watch, Progressive Democrats of America, United Students Against Sweatshops along with Chicago Democratic Socialists of America and Illinois Fair Trade Campaign were there..[8]

In the 113th Congress, 50 members of the House of Representatives belonged to the New Democrat Coalition, including:[9]

Ugochukwu Okere is a Budlong Woods resident, the former chairman of Fuerza del Sol, a Chicago Public Schools graduate, and a community organizer on Chicago’s north side. He is also a government worker, having spent time employed in the office of Congressman Michael Quigley, the Chicago City Clerk, and the Chicago Federal Executive Board.

TODAY: members of NIAC's Chicago congressional action team had a productive meeting with Congressman Mike Quigley. They shared stories about why #DiplomacyIsPersonal to them and explained the potential implications of a US-Iran agreement.

Stay tuned for more grassroots news from IL's 5th District - our team received a commitment for a follow-up meeting with the Congressman after the November 24 negotiations deadline to discuss next steps!

Keep up the great work, team Chicago! — with Parviz Pakravan and Mary Hanley.

“The work that CAIR does for our city and across the nation not only enriches the Muslim community,but also expands productive dialogue between cultures.”-Rep. Mike Quigley (D-Ill.) (September 2014). [11]

“CAIR’s efforts enrich the American Muslim community, encourage dialogue, and unite others to combat Islamophobia and all types of hate.” 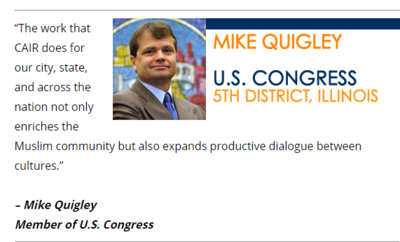 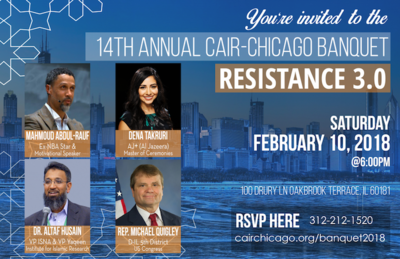 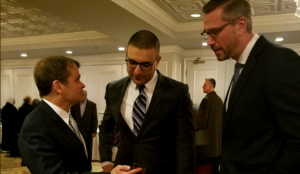 Quigley and Frerichs at the Banquet with CAIR’s Ahmed Rehab 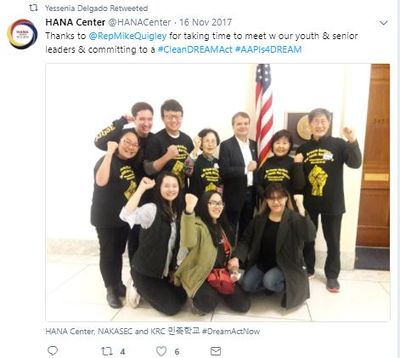 We continue to meet with elected officials to urge Congress to support a clean DREAM Act for 3.3 million young people, their families and communities. Thank you to Senators Dick Durbin and Tammy Duckworth and Congress(wo)men Luis Gutierrez, Jan Schakowsky, Mike Quigley, Brad Schneider, and Raja Krishnamoorthi for supporting a clean DREAM Act!

“Our nation has lost too many transgender Americans to targeted, bigoted violence in our communities,” Kennedy said. “With this resolution recognizing Transgender Day of Remembrance, Congress can commit to confronting these tragedies and protecting all of our citizens.”

In addition to recognizing the Transgender Day of Remembrance, the resolution calls for enhanced federal data collection of anti-trans violence and encourages federal and state governments “to study, respond to, and prevent violence against transgender people.”

From the Sunrise Movement:[14]

Alexandria Ocasio-Cortez has released a proposal for a Select Committee on a Green New Deal, a plan that would transform our economy and society at the scale needed to stop the climate crisis.

We have the momentum to make a Green New Deal real, but we need a critical mass of Congresspeople to support the proposal.

Take action on Dec. 10 to show Congress the Green New Deal is a top priority.