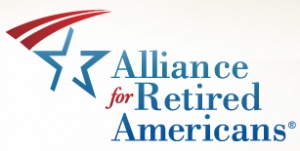 The Alliance of Retired Americans brings together retired union members and other senior and community activists, and seeks to engage in "important" political battles to protect and preserve programs vital to the health and economic security of older Americans.[1]

In 2001, the national AFL-CIO helped establish the Alliance for Retired Americans , a "progressive retiree organization".

Chicago Communist Party USA members Frank Lumpkin and Bea Lumpkin attended the founding convention, representing the Save Our Jobs Committee. They paid our own fare but stayed with son Paul Lumpkin in Washington DC. [2]

ARA opened its arms to community groups, too. SOJ, the retiree group, had found a new home!

Since 2002, several state affiliates have been chartered and more states are coming on board. The following is an alphabetical list of the Alliance's state affiliates.[4]

400 activists came to Washington, DC for the Alliance for Retired Americans’s 2015 National Legislative Conference in July . The activists reached more than 150 offices on Thursday’s Lobby Day, when they met with their Members of Congress and Senators and voiced their concerns about retiree issues. Alliance members lobbied their elected officials with very specific goals in mind, including: expand earned Social Security benefits; protect Social Security Disability Insurance; preserve Medicare and allow no cuts to it; and oppose the Trans-Pacific Partnership (TPP) Trade Agreement.

Retirees With the Write Stuff

The Alliance for Retired Americans Letter to the Editor Campaign.

"Retirees with the Write Stuff" is a new project of the Alliance for Retired Americans to encourage more retirees to write letters to their local newspaper. Get a free "Write Stuff" pen, plus your name in our weekly newsletter, Friday Alert, and on our website.