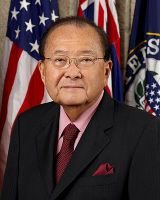 As a young man, he fought in World War II with the 442nd Regimental Combat Team, for which he received the Medal of Honor. He was later elected to the Hawaii Territorial House of Representatives, the United States House of Representatives, and the United States Senate. Senator Inouye was the first Japanese American to serve in Congress, representing the people of Hawaii from the moment they joined the Union.

The Council for a Livable World, founded in 1962 by long-time socialist activist and alleged Soviet agent, Leo Szilard, is a non-profit advocacy organization that seeks to "reduce the danger of nuclear weapons and increase national security", primarily through supporting progressive, congressional candidates who support their policies. The Council supported Daniel Inouye in his successful Senate run as candidate for Hawaii.[1]

March 16 1981, twenty-four American political figures, most of them of Irish ancestry, urged an end to the fear and the terrorism and the bigotry in Northern Ireland and proposed that the Reagan Administration find a way to promote a peaceful settlement of the Ulster conflict.

In a joint St. Patrick's Day statement, the 24 - including Governor Carey, Governor Byrne, Senator Daniel Patrick Moynihan of New York and Senator Edward M. Kennedy of Massachusetts -announced the creation of an organization seeking to facilitate greater understanding of the positive role America can play resolving this tragic conflict.

They stressed that the organization, known as the Friends of Ireland, will seek the unification of the six counties of Northern Ireland with the Irish Republic but that the goal can be reached only with the consent of a majority of the people of Northern Ireland, and with full safeguards for the rights of both sections of the community.

It was the fourth consecutive year that the group had issued a statement on St. Patrick's Day calling for an end to violence in Ulster, but it was the first time it had sought to define a role for the United States. The group was set up to counter a vocal lobby for the Irish Republican Army.

Two-thirds of the people of Northern Ireland are Protestants, while the Irish Republic is overwhelmingly Roman Catholic. Efforts to resolve the violent conflict between Protestants and Catholics, and work out a settlement aimed at erasing the border, have been thwarted by terrorists on both sides.

The statement urged the Administration to play a constructive role in Northern Ireland and support a policy that helps bring terrorism to an end, that demands respect for the human rights of all the people of Northern Ireland, that recognizes the legitimate aspirations of both the Protestant and Catholic communities, and that strengthens the ties between two of America's closest friends - Ireland and Great Britain.

The Irish Government promptly applauded the creation of the group. In a statement released by the Irish Embassy here, Prime Minister Charles Haughey said that the links between the Irish and American peoples, which are of such long standing, will be even further strengthened by the setting up of this group.

In their statement, the political figures said that the Friends of Ireland will be open to all members of Congress and will strive to inform Congress and the country fully about all aspects of the conflict in Northern Ireland.

In 1994 Jim McDermott, John Conyers and Paul Wellstone promoted a "single-payer" health care bill (HR1200/S491).[3] Ellen Shaffer, a member of Wellstone's staff told the People's Weekly World that the authors had been "working closely" with Hillary Clinton. "She knows what they are doing" Shaffer said.[4]

Don Young was Director of "Resettlement to Redress - Rebirth of the Japanese-American Community".

This documentary examines the resettlement of Japanese Americans after World War II through the signing of HR442 by President Reagan in 1988, wherein it was formally acknowledged that internment was based on racism and merited an apology and reparation. Among those interviewed for the documentary are: Roy Doi of Davis, Georgette Imura and Diane Tomoda of Sacramento, Pat Emino and Kiyo Fujiu of Chicago, Ellen Nakamura and John Fuyume of Seabrook, New Jersey, Iddy Asada of Seabrook, New Jersey, Robert Nakamura, Karen Ishizuka and Victor Shibata of Los Angeles, Japanese American Citizen League Executive Director John Tateishi, Secretary of Transportation Norman Mineta, Senator Daniel Inouye and Congresswoman Doris Matsui.[6]

The Committee for Harry Bridges Plaza is a 501(c)3 non-profit that first began in 1998 as an ad hoc group of citizens dedicated to the belief that the ideals and deeds of Harry Bridges and the working men and women of 1934 should occupy a prominent position in San Francisco’s civic history and never be forgotten.

To that end the Committee took on a two-part plan: First, to have the plaza then under construction in front of the Ferry Building between the north- and south-bound lanes of the Embarcadero named after Harry Bridges, and second, to erect a monument of Harry on the site. The idea quickly gained the enthusiastic support of organized labor, past and present mayors of San Francisco, the Board of Supervisors, the Port Commission, and from elected state and federal representatives. Harry Bridges Plaza officially came into existence on July 27, 1999.

The official christening fell on July 28, 2001, Harry’s 100th birthday. The Committee worked with the Mayor of San Francisco and the Governor of California to proclaim the date “Harry Bridges Day.” In celebration, tributes to Harry were read into the Congressional Record by Senator Barbara Boxer and Congresswoman Nancy Pelosi.[7]

The following is a list of the 23 U.S. Senators voting "Nay" on the Iraq War resolution in October 2002. The vote was 77-23 in favor of the resolution.

Sen. Inouye sent Myron Yuen to Cuba for 9 days in June/July 2008. The trip was courtesy of a $1,468.00 grant from the Institute for Policy Studies connected Center for Democracy in the Americas... "To participate in a fact-finding mission to address issues about Cuba and U.S. policy toward Cuba" .[9] 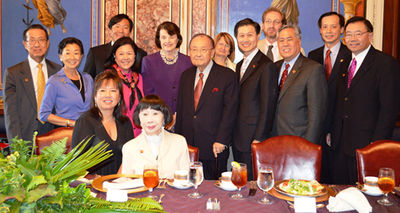 Committee of 100 Members Delegation at Senate Luncheon hosted by Senator DanielInouye, with his wife Irene Hirano-Inouye and Senator Dianne Feinstein.

July 2012 Senator Daniel Inouye hosted a luncheon for the C-100 Washington delegation at the U.S. Capitol. In his brief and candid remarks, he recounted the historical experiences of the many Japanese Americans who faced discrimination and reflected on how similar prejudices are resurfacing against Chinese Americans in response to American angst over China's far-reaching economic power.

He affirmed the Committee's efforts to mitigate anti-China sentiment in the United States by educating the American public on China issues and fostering people-to-people diplomacy between both countries.

Despite her full schedule, Senator Dianne Feinstein took a rare moment to join the luncheon and speak about U.S.-China relations. The senator's insightful outlook based on her myriad interactions with the top echelons of China's leadership underscored the importance of strengthening trust in bilateral relations.[10]

On February 14, 2012 Committee of 100 hosted a “Year of the Dragon” Lunar New Year Reception in Washington D.C. in the Gold Room of the Rayburn House Office Building. The guests were Asian Pacific American leaders, Members of Congress and Congressional staffers, media representatives, and other honored guests. 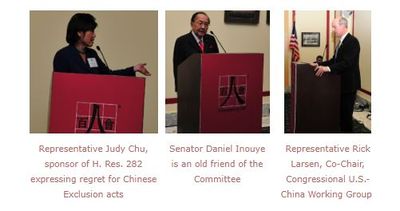 Senator Inouye was a trailblazer in leading theprogress of Asian Americans in the United States. For more than half a century, Senator Inouye has been a paragon of public service and personal sacrifice. Along with his wife Irene Hirano-Inouye, the Senator actively advanced the Committee of 100's mission of bridging US-China relations and empowering the Asian American community. Mrs. Inouye is a devoted member of the C-100 Advisory Council.[12]

July 2010 By Jane Leung Larson, a delegation of 16 Committee of 100 members led by C-100 Chairman John Chen spent two intense days exchanging views with a number of government officials on U.S.-China relations, Chinese language teaching in the schools, and the unique resources and connections that the Committee brings to the table.

The June 23-24 Washington Leadership Dialogue was organized to give the Committee of 100 an opportunity to hear the concerns of members of Congress and the Administration as well as share observations and recommendations with Washington policy-makers on a variety of issues.

Of special interest was the Committee’s work in the past year with the U.S. State Department at the highest levels (Secretary of State Hillary Clinton) to support and promote the USA Pavilion at the World Expo in Shanghai and build the Pavilion’s most popular exhibit, “The Chinese in America.” Also emphasized was the Committee’s long-time commitment to education, particularly C-100 activities in both northern and southern California to support the teaching of Chinese language and culture in public schools.

Private meetings were held with Jeff Bader (Senior Director for Asian Affairs at the National Security Council), Chris Lu (Assistant to the President and White House Cabinet Secretary), Kurt Campbell (Assistant Secretary of State for East Asian and Pacific Affairs), Senator Dianne Feinstein (CA), and Senator Daniel Inouye (HI), all of whom have participated in Committee of 100 annual conferences. The Administration’s goal of sending 100,000 American students to China in the next four years was the topic of discussion with a group of top officials from the Departments of Education and State.

The Committee also met with Co-chairs of the House U.S.-China Working Group (Reps. Rick Larsen and Charles Boustany) and members of the Congressional Asian Pacific American Caucus (Reps. Judy Chu, Mike Honda, and David Wu). One of the topics discussed with the Caucus was a possible Congressional resolution of apology for the Chinese Exclusion Act. A briefing was held with Christina Lagdameo, Deputy Director of the White House Asian American and Pacific Islander Initiative co-chaired by Commerce Secretary Gary Locke and Education Secretary Arne Duncan.

On June 23, the Committee also held a dinner to welcome the new Chinese Ambassador to the U.S. (and an old friend of the Committee), Zhang Yesui. Committee of 100 Advisory Council members David M. Lampton and Stapleton Roy also met with the delegation to discuss how the organization can enhance its presence in Washington.[13]

In 2012, Daniel Inouye was listed as member the Executive Board of the Congressional Asian Pacific American Caucus.[14]

Circa 2013, Daniel Inouye served on the Honorary Board of the Asian American Action Fund;[15]

In November 2013, Daniel Inouye was posthumously awarded the Presidential Medal of Freedom by President Barack Obama.[16]