David Wu was a Democratic member of the United States House of Representatives, representing the 1st district of Oregon.

Wu resigned in 2011 following allegations that he made unwanted sexual advances on a friend's teenage daughter.[1]

The Council for a Livable World, founded in 1962 by long-time socialist activist and alleged Soviet agent, Leo Szilard, is a non-profit advocacy organization that seeks to "reduce the danger of nuclear weapons and increase national security", primarily through supporting progressive, congressional candidates who support their policies. The Council supported David Wu in his successful House of Representatives run as candidate for Oregon.[2]

David Wu for Congress has been a client of Robert Creamer's Strategic Consulting Group.[3]

“Contract, Yes! Government intervention, No!” was the message of the International Longshore and Warehouse Union (ILWU), the AFL-CIO, Senate Majority Leader Tom Daschle (D-S.D.) and many mayors at rallies up and down the West Coast, Aug. 12. Thousands took to the streets in protest of a threat by the Bush administration to take over ports militarily in the event that the union decides to strike.

“I’m here because I think you are right on track. The stakes could not be higher,” Daschle said to the Portland, Ore., rally. “I say this administration is wrong, wrong, wrong, and you’ve got every right to fight, fight, fight!”

“We will be with you until the last day to see that you get what you deserve,” Daschle said as he pledged that Democrats nationwide would defend the union’s right to strike.

Luo Zhijun, Governor and Party Secretary for Jiangsu Province, and his economic development delegation were hosted at a dinner in the home of H&Q Asia Pacific Chairman and Founder Ta-lin Hsu on July 17, 2011, in Atherton, California. A number of Committee of 100 members and members of Congress, and other special guests, attended. The delegation, representing the one of the wealthiest Chinese provinces, included members of the Jiangsu government as well as Jiangsu-based entrepreneurs including the CEO of the solar energy company Suntech, Shi Zhengrong. Governor Luo gave a brief talk introducing Jiangsu’s economic advantages, which was extensively covered in the Chinese press. 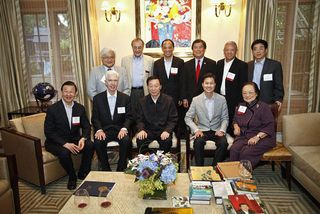 July 2010 By Jane Leung Larson, a delegation of 16 Committee of 100 members led by C-100 Chairman John Chen spent two intense days exchanging views with a number of government officials on U.S.-China relations, Chinese language teaching in the schools, and the unique resources and connections that the Committee brings to the table.

The June 23-24 Washington Leadership Dialogue was organized to give the Committee of 100 an opportunity to hear the concerns of members of Congress and the Administration as well as share observations and recommendations with Washington policy-makers on a variety of issues.

Of special interest was the Committee’s work in the past year with the U.S. State Department at the highest levels (Secretary of State Hillary Clinton) to support and promote the USA Pavilion at the World Expo in Shanghai and build the Pavilion’s most popular exhibit, “The Chinese in America.” Also emphasized was the Committee’s long-time commitment to education, particularly C-100 activities in both northern and southern California to support the teaching of Chinese language and culture in public schools.

Private meetings were held with Jeff Bader (Senior Director for Asian Affairs at the National Security Council), Chris Lu (Assistant to the President and White House Cabinet Secretary), Kurt Campbell (Assistant Secretary of State for East Asian and Pacific Affairs), Senator Dianne Feinstein (CA), and Senator Daniel Inouye (HI), all of whom have participated in Committee of 100 annual conferences. The Administration’s goal of sending 100,000 American students to China in the next four years was the topic of discussion with a group of top officials from the Departments of Education and State.

The Committee also met with Co-chairs of the House U.S.-China Working Group (Reps. Rick Larsen and Charles Boustany) and members of the Congressional Asian Pacific American Caucus (Reps. Judy Chu, Mike Honda, and David Wu). One of the topics discussed with the Caucus was a possible Congressional resolution of apology for the Chinese Exclusion Act. A briefing was held with Christina Lagdameo, Deputy Director of the White House Asian American and Pacific Islander Initiative co-chaired by Commerce Secretary Gary Locke and Education Secretary Arne Duncan.

On June 23, the Committee also held a dinner to welcome the new Chinese Ambassador to the U.S. (and an old friend of the Committee), Zhang Yesui. Committee of 100 Advisory Council members David M. Lampton and Stapleton Roy also met with the delegation to discuss how the organization can enhance its presence in Washington.[6]