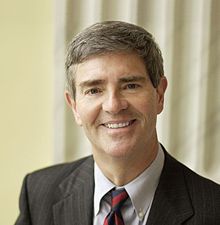 Template:TOCnestleft Brad Miller was a Democratic member of the United States House of Representatives, representing the 13th district of North Carolina.

Ralph Bradley (Brad) Miller was born on May 19, 1953 in Fayetteville, North Carolina to Margaret Hale Miller and Nathan David Miller.[1]

The Council for a Livable World, founded in 1962 by long-time socialist activist and alleged Soviet agent, Leo Szilard, is a non-profit advocacy organization that seeks to "reduce the danger of nuclear weapons and increase national security", primarily through supporting progressive, congressional candidates who support their policies. The Council supported Brad Miller in his successful House of Representatives run as candidate for North Carolina.[3]

Repeal of Defense of Marriage Act

In September 2011, Miller announced that he will co-sponsor a bill that would repeal the Defense of Marriage Act, the 1996 law that forbids federal agencies from recognizing the legal marriages of gay and lesbian couples. Describing the legislation, Miller said "North Carolina would still not be required to perform civil marriage, but it would be required to recognize marriages performed in other states.” The announcement comes on the heels of the North Carolina Legislature announcing that it would included a proposed constitutional amendment on the next ballot banning gay marriage.[5]

As a consequence of involuntary school desegregation, times were already tense in much of the South in 1968 when Dr. Martin Luther King, Jr. was murdered. In Wilmington, North Carolina, school desegregation involved closing Black schools, firing or transferring Black teachers, and placing Black students in previously all-White schools, which led to fights among students and subsequent arrests. There were also battles between street-patrolling Ku Klux Klan members and Black residents.

Black students boycotted Wilmington’s high schools in January 1971 as a result of mistreatment. That year, the United Church of Christ sent 24-year-old Rev. Benjamin Chavis to Wilmington to mentor the students and assist them in developing nonviolent protests and boycotts.

Soon after Chavis arrived in Wilmington, a local grocery store was firebombed. Gunshots were allegedly fired from the top of a local Black church were Chavis and the students usually met as firemen responded.

The “Wilmington Ten” – including Chavis, eight Black male high school students and one White female anti-poverty worker – were arrested, charged, and convicted of arson and in 1971. They were sentenced to a collective total of 282 years in prison, with each serving nearly a decade in jail. The youngest of group was 18 years old; the White woman, Ann Shepard, was the oldest at 35.

The legal petition to pardon all of the Ten has been pending in North Carolina Gov. Perdue’s Executive Clemency office since May 2012. Perdue, a Democrat, is expected to make her decision in December before she steps down.

Miller is an occasional blogger at the Daily Kos.[8]

The following are past and present staff:[9]