Richard "Dick" L. Trumka was elected Secretary- Treasurer of AFL-CIO in 1995 after serving as President of the United Mine Workers union since 1982. In his position he has focused on creating investment programs for the pension and benefit funds of the labor movement.[1]

Richard Trumka served as president of United Mine Workers from 1982 - 1995. Trumka ousted the incumbent at age 33, and was an alumnus of Jock Yablonski's Miners for Democracy the first major rank and- file insurgency of the post-1955 era.

During his tenure Trumka led difficult but successful strikes against Pittston Coal and the Bituminous Coal Operators Association. [2]

In 1993 UMW striked against Peabody Coal. The miners were protesting the UMWA's sanctioning of forced overtime in the five-year contract signed with the Bituminous Coal Operators Association (BCOA) last December. Under the agreement, miners are forced to work nine or more hours per day. The dissidents pointed to the hypocrisy of UMWA officials holding a rally to honor the winning of the eight-hour day in 1902, when these same officials had signed away the eight-hour day for current miners. One of the miners, Richard Cicci, financial secretary of UMWA Local 1197 and a worker at Rochester and Pittsburgh's Eighty-Four Mine in Washington County, Pennsylvania, was struck on the head with a stick and suffered a gash over his ear that required nine stitches.[5]

Eddie York, a 39 year old nonunion worker, “was shot in the back of the head and killed” leaving a job in Logan County, West Virginia. “Guards told police the truck careened across the road and went into a ditch. When guards rushed over to check on York, they continued to be pelted with rocks, guards told police.”[6]

Charged in the assault were three officials on the payroll of the UMWA International: James Gibbs, director of organizing and administrative assistant to UMWA President Cecil Roberts; Donnie Samms, organizing director for Region Four, which covers the western US; and Marty Hudson, a trustee of the union's Combined Benefit Fund and 1992 Benefit Plan. In a video shot immediately following the attack, Gibbs, Hudson and Samms can be seen escorting UMWA President Cecil Roberts and former UMWA President and current AFL-CIO Secretary-Treasurer Richard Trumka into the meeting hall.[5]

In a detailed account of the York murder and subsequent investigation, Reader’s Digest noted that “UMW President Richard Trumka did not publicly discipline or reprimand a single striker present when York was killed. In fact, all eight were helped out financially by the local.” Eventually, the union agreed to let the company “dismiss the eight original defendants if they were convicted,” but when the company “issued letters of dismissal to the seven pickets who pleaded guilty,” the union filed a grievance on their behalf.[7] Trumka and other UMW officials were charged in a $27 million wrongful death suit by Eddie York’s widow. After fighting the suit intensely for four years, UMW lawyers settled suddenly in 1997[8] - just two days after the judge in the case ruled evidence in the criminal trial would be admitted.[9]

The Socialist Equality Party reiterated its solidarity with the victims of the Mitchell Day assault. In an editorial board statement issued shortly after the April 1 attack, the WSWS wrote:[5]

"The Socialist Equality Party in the US emphatically condemns this hooligan attack and calls on miners and all workers to protest this assault on their democratic rights. Whatever Roberts and Trumka may think, their union sinecures do not give them a license to bully and intimidate workers who oppose their policies."

More information on union violence which occurred during Trumka's presidency is available in the Richard Trumka Fact File.

The congressionally identified Communist Party USA front, the Labor Research Association, was holding their annual luncheon in New York City in November 1983. An announcement of this event was published in the "What's On" section of the CPUSA newspaper, the Daily World of November 10, 1983, P. 19, as follows:

The Democratic Socialists of America led Workers Defense League, Inc. presented its David Clendenin Award at its annual dinner May 13 1991 to Richard Trumka, President of the United Mine Workers of America.[10]

Empowerment '92: A Call to Action Conference, was held June 6 to 9, 1992. African American community activists, joined with trade unionists, politicians, peace activists, environmentalists and others to discuss how to change the nation's priorities as the economic crisis deepens.

Of the upcoming conference DC Statehood Senator Jesse Jackson said..."We issue this Call to Action to reaffirm and reassert our vision of a true world order, one based on peace, justice and human priorities. our message, translated into action can, and must srt a new direction for our nation".[12]

In 1996 Richard Trumka, AFL-CIO was one of the original 130 founders of Campaign for America's Future[15].

Speakers at the November 1997 Coalition of Labor Union Women conference in Seattle, included Richard Trumka, and Linda Chavez-Thompson of the AFL-CIO, Nancy Riche, executive VP of of the Canadian Labor Congress and Senator Patty Murray and Rep. Jim McDermott of Washington State.[16]

Richard Trumka serves[17]on the Board of Directors of the Democratic Socialists of America led Economic Policy Institute[18].

There is a class struggle in process in the Congress with the Progressive Caucus around such issues as the Welfare Bill, NAFTA and Single Payer Health Care.

As a result of this DSA's Political Director Christine Riddiough organized a meeting with the Congressional Progressive Caucus with the purpose and cogent task as to: "How can we unite our forces on a common agenda?" Those in attendance included Richard Trumka, Noam Chomsky, Patricia Ireland, William Greider and Jesse Jackson.[19]

On January 9, 1997, over 600 people attended "The Progressive Challenge: Capitol Hill Forum" sponsored by the House Progressive Caucus, Democratic Socialists of America, and a host of other progressive organizations.

The primary goal of this day-long "kick-off" forum was to "identify the unifying values shared by progressives at this point in US history, to help define core elements of a forward-looking progressive agenda, and to pinpoint ways to connect that agenda with the concerns of millions of disillusioned people who lack voices in present politics and policy-making."

After a welcome by Representative Bernie Sanders, an impressive array of legislators, activists, and thinkers offered their insights. Senator Paul Wellstone, Reverend Jesse Jackson, Patricia Ireland of NOW, Richard Trumka of the AFL-CIO, Noam Chomsky, William Greider of Rolling Stone, and DSA Honorary Chair Barbara Ehrenreich were among the many who spoke.

Some emphasized the importance of the conventional, if difficult, process of progressive candidates building grassroots campaigns that treat voters with intelligence and challenge prevailing wisdom regarding what values and issues motivate ordinary Americans struggling to make ends meet-as opposed to using polls and focus groups to concoct "designer" campaigns to appeal to upscale "soccer moms." Other speakers reminded those present that great changes are made by people acting outside of the corridors of power to define justice and "political reality," and the electoral and legislative processes are not the only arenas worthy of activists' attention.[20]

In 1997 the United Farm Workers, with the support and participation of the AFL-CIO, mobilized over 30,000 farmworkers and supporters in the Strawberry Capitol of the World: Watsonville, California. The march was lead by UFW leaders, Jesse Jackson, John Sweeney, Ron Carey of the Teamsters Union, Martin Sheen, and a "host of dignitaries". A particularly strong contingent came from the UCLA MeCha which mobilized close to 100 Chicano students.

Dolores Huerta, UFW vice president, an Honorary Chair of DSA , and a supporter of the DSA Latino Commission, welcomed the marchers.

Arturo Rodriguez, the new President of the United Farmworkers and heir to the tradition of Cesar Chavez, delivered his speech in English and in Spanish. John Sweeney and Richard Trumka addressed the crowd, with translation provided by Louis Valdez and others. DSA contingents came from Sacramento, Los Angeles, and San Diego as well as the Latino Commission. [21]

Poul Rasmussen, president, Party of European Socialists, and co-chair of the Global Progressive Forum has stated of Trumka,

This is one of the most progressive people in the United States of America."

Rasmussen and Trumka have been working together to bring in a global financial transaction tax. See video to the right.

In the meantime, the delegation attended Pittsburgh for the G20 preparation with the ITUC leadership and met the new President of AFL-CIO, Richard Trumka. [23]

From 21-25 June 2010, a high level Party of European Socialists delegation headed by Poul Nyrup Rasmussen travelled to Canada for the International Trade Union Confederation Congress in Vancouver and the G20 summit. The delegation presented the PES “A Progressive way out of the Crisis” strategy, which aims to impose strict financial regulation and fostered support for a global financial transactions tax (FTT) of 0.05%.

During the four day visit to North America, PES President Poul Nyrup Rasmussen also gave a speech to the Socialist International Council in New York on 21 June 2010 and met with members of the US Congress in Washington.

National Jobs For All Coalition

In 2010, Richard Trumka, was listed as serving on the advisory board of the Democratic Socialists of America dominated National Jobs For All Coalition.[26]

Fight Back Teach In

The following were featured speakers for the Teach In:[28] 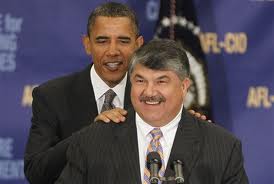 Take Back the American Dream Conference 2011

Richard Trumka was one of the 158 speakers who addressed the Take Back the American Dream Conference 2011 . The Conference was hosted by the Institute for Policy Studies, and Democratic Socialists of America dominated Campaign for America's Future, [30]

400 activists came to Washington, DC for the Alliance for Retired Americans’s 2015 National Legislative Conference in July . The activists reached more than 150 offices on Thursday’s Lobby Day, when they met with their Members of Congress and Senators and voiced their concerns about retiree issues. Alliance members lobbied their elected officials with very specific goals in mind, including: expand earned Social Security benefits; protect Social Security Disability Insurance; preserve Medicare and allow no cuts to it; and oppose the Trans-Pacific Partnership (TPP) Trade Agreement.