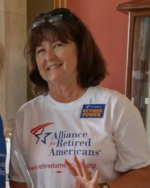 The genius of the Social Security system is that it ties generations together," emphasized Congresswoman Rosa DeLauro (CT-3) at the August 2010, kickoff event for Social Security's 75th birthday held at the Communist Party USA run New Haven People's Center by the Connecticut Alliance for Retired Americans (ARA). "I pay in for my mother during my working life, and in the future my children will pay in for me," she said, adding that it will never become insolvent.

Addressing a packed room decorated with balloons and a birthday cake, DeLauro decried attempts to privatize or limit Social Security, citing the fact that millions of seniors, disabled and children would fall into poverty without this program.

Mary Elia, ARA field staff in Connecticut, gave a PowerPoint presentation with the hard facts about Social Security showing that it is not bankrupt as opponents have claimed, but has a surplus that will last until 2037.

Speaking on behalf of the 53,000-member Connecticut ARA, Cal Bunnell, a retired steelworker, stressed that Social Security is essential for those who have worked hard all their lives to maintain a decent standard of living with dignity.

"There is a big debate going on in our country about what role government should play," said Joelle Fishman a board member of both ARA and the Peoples Center. "Those who want to do away with Social Security want to do away with any role of government for the well-being of people except to protect the corporations and the super rich," she said, urging a large turnout in the November elections.

The event was the first of two co-sponsored by the Connecticut Alliance of Retired Americans, with another event scheduled at the West Hartford Senior Center on August 18.[1]

Retirees With the Write Stuff

The Alliance for Retired Americans Letter to the Editor Campaign.

"Retirees with the Write Stuff" is a new project of the Alliance for Retired Americans to encourage more retirees to write letters to their local newspaper. Get a free "Write Stuff" pen, plus your name in our weekly newsletter, Friday Alert, and on our website.