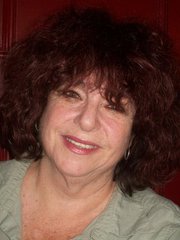 Template:TOCnestleft Sabina Virgo has been a writer and an activist since the 60’s during the civil rights movement. She was a Jesse Jackson delegate to the 1984 and 1988 Democratic Party conventions, and served on the national Board of Directors of the Rainbow Coalition. She is currently with the Los Angeles Metropolitan Alliance and other independent political action networks[1].

In 2014, Sabina Virgo was listed a a friend on the DuBois Clubs Facebook page.[2]

At the 1987 National Rainbow convention in Raleigh North Carolina, a new board was elected, which included Sabina Virgo. 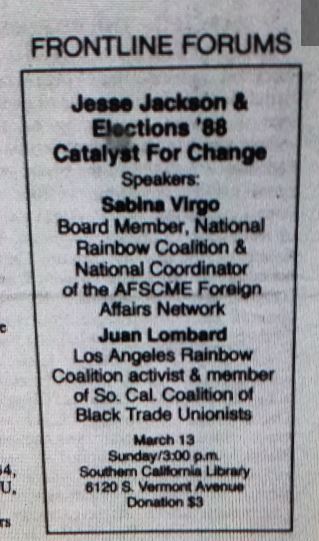 A full-page ad appeared in the weekly Marxist-Maoist U.S. publication, the Guardian on May 25, 1988, page. 9 under the there of "National Day of Protest to End Israeli Occupation", calling on people to "Demonstrate" Saturday, June 4, 1988". Its themes were:

On April 8, 1988 Los Angeles Democratic Socialists of America convened a meeting at the Workmen's Circle West Los Angeles "Action for Jackson, where does he stand? Where will it lead? - A political analysis of the Jesse Jackson for President campaign, with its possibilities, perils, and promise for the Left." 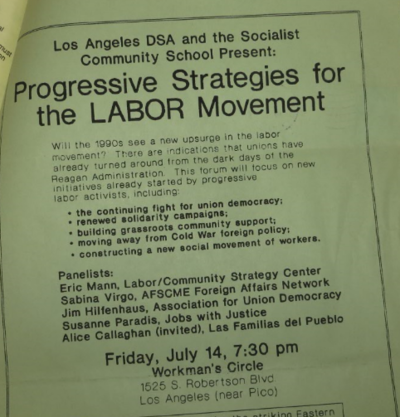 In the mid 1990s Sabina Virgo was[4]a contributing editor to Oakland based Institute for Social and Economic Studies- sponsor of CrossRoads magazine, which sought to promote dialogue and building new alliances among progressives and leftists... and to bring diverse Marxist and socialist traditions to bear while exploring new strategies and directions for the progressive political movements.

In 1992, a "call" went out to leftist radicals and communist revolutionaries of various orientations to hold a national People's Progressive Convention in Ypsilanti, Michigan, August 21-23, 1992. 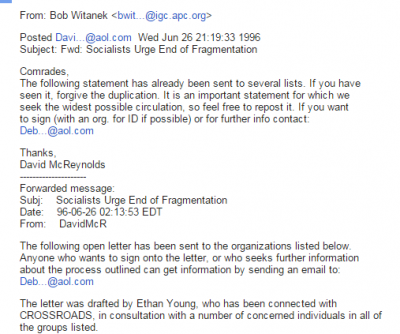 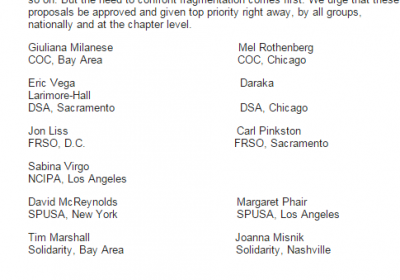 96-06-26 an email was sent from David McReynolds and several other socialists, headed "Socialists Urge End of Fragmentation"

The following open letter has been sent to the organizations listed below.

The letter was drafted by Ethan Young, who has been connected with Crossroads, in consultation with a number of concerned individuals in all of the groups listed.

To: The National Convention of the Committees of Correspondence

As members of the groups listed above, we have joined together out of concern for the future of the organized socialist left. We have two concrete proposals that are being submitted to all of our groups simultaneously, so that they might be discussed and, if accepted, acted on as soon as possible.

1. We propose that joint regional meetings of our six groups be organized for members and invited individuals, as outlined in the June 1996 issue of CROSSROADS.

2. We propose that organizing begin immediately for a national conference of socialist youth in Fall 1997, initiated by the youth members and affiliates of the six groups, but open to co-sponsorship by other agreed-upon groups and individuals.

In 2002 Sabina Virgo was listed on the Advisory Board of Committees of Correspondence for Democracy and Socialism[5].

Signers of the letter included Sabina Virgo, Founding and Past President of AFSCME, Local 2620.[6]