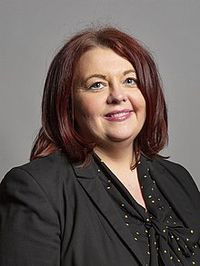 Paula Barker (born 9 May 1972)[4] is a British Labour Party politician who has served as Member of Parliament (MP) for Liverpool Wavertree since 2019.

Before her election, Barker was the Unison North West Regional Convenor, as well as the leader of her local government branch in Halton, Cheshire.

Barker's candidacy to be the Labour candidate for Liverpool Wavertree was backed by several unions and Momentum UK.

In 2021 Paula Barker was member of the Socialist Campaign Group in the House of Parliament.

April 15 2020, fifty one British members of parliament have written to Dominic Raab, the UK Foreign Secretary and acting Prime Minister to call for the US blockade of Cuba to be temporarily suspended during the Covid-19 pandemic.

Grahame Morris MP, Chair of the All-Party Parliamentary Group on Cuba, coordinated the letter which asks the British government to make a public statement and to raise the issue directly with its counterparts in the United States’ government.

The letter from the British parliamentarians cites examples from around the world where governments and international organisations have demanded that humanitarian aid be allowed in to Cuba to help the country fight COVID-19. It quotes Michelle Bachelet, UN High Commissioner for Human Rights, Arancha Gonzalez, Spanish Foreign Minister, and Josep Borrell, the EU’s high representative for foreign affairs, who have all publicly called for sanctions to be suspended to Cuba and other sanctioned countries to allow for the delivery of essential supplies and medicine to stop the spread of the virus.

Paula Barker MP said, “I call on the British Government to urgently request the US Government to cease the illegal blockade with immediate effect. The Cuban people have helped us in our time of need we must do the same.”

After eighteen months and twenty online public meetings CSC was delighted to participate in and host our first face-to-face public meetings, since the start of the COVID-19 pandemic, in September.

At the Labour Party Conference in Brighton we were invited to speak at ‘The World Transformed’, the Young Labour rally, as well as organising a fringe meeting as part of the main conference fringe programme.

CSC’s conference exhibition stall was extremely busy all week. Several MPs had their photographs taken with our ‘End the US blockade, 60 years too long’ poster, and it was great to see many existing CSC members visit to say hello and give their support, as well as Labour Party delegates who came to ask questions, buy gifts and join. More than 20 new members were recruited during the week.

On Saturday 25 September, CSC’s Natasha Hickman spoke at two events. Joining speakers from Colombia, Brazil, and Bolivia at The World Transformed Festival running concurrently with the Labour Party Conference, she contrasted the lack of mainstream media coverage for the mass demonstrations against imperialism and right-wing governments that had been taking place in these countries for many months compared to the way that the same media had responded to localised and much smaller events in Cuba. The meeting, ‘Latin America Rising: Imperialism, Resistance and Solidarity,’ hosted by Alborada attracted more than 100 people. Later the same evening, Natasha told a crowd of 200 at the Young Labour Rally that there was nothing controversial about standing up against the US blockade whose aim was to starve the Cuban people into submission. Other speakers at the rally included MPs Jeremy Corbyn, Richard Burgon and Zarah Sultana.

On Monday 27 September a further 150 people listened to Cuban Ambassador Barbara Montalvo Alvarez speak at her first fringe meeting since arriving in the UK in March 2020. CSC’s meeting ‘Solidarity and resistance: Cuba’s fight against COVID and the US blockade’, was sponsored by Unite the Union, and chaired by the union’s Assistant General Secretary Steve Turner.

Grahame Morris MP told the audience about the measures taken both in and out of parliament by MPs to pressure the Biden administration to reverse sanctions imposed by Trump including allowing Cuban Americans to send family remittances to the island.

Labour NEC youth representative and junior doctor Lara McNeill shared her first-hand experience of training as a doctor in Havana and told the audience what it was like to work in Cuba’s world class healthcare system. She compared the cost of training to become a doctor in the UK and the debts students would rack up here with Cuba where medical training is free and as a result doctors came from much more diverse backgrounds than in Britain.

CSC Director Rob Miller closed the meeting with a call for solidarity given the current difficulties the island faced. “Cuba has given so much to the world, it is time for us to give something back” he said. 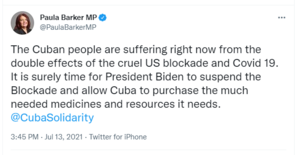 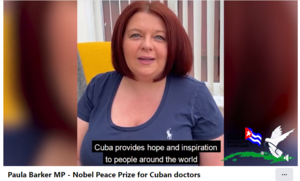 October 17, is an important date in the fight against fascism. It is the anniversary of the 1938 passing-out parade of the IBs. Before volunteers returned to their home countries, they received a ticker tape send-off through the streets of Barcelona.

In tribute to those who fought with and supported the IBs, the Communist Party of Britain has planned commemorations across the nation today October 17 2020 with full support of the International Brigades Memorial Trust (IBMT).

In Manchester, the North West District of the Communist Party is planning a ceremony, subject to covid safety arrangements. Party members will be joined by supporters of the IBMT and the local IB Greater Manchester Group.

International Brigade member Sam Wild’s daughter, Dolores Long, is due to speak at today’s Manchester commemoration. She is a member of the IB Greater Manchester Group and the national executive of the IBMT.

Paul Ward of the Communist Party in Greater Manchester will also speak, while Paula Barker, the Labour MP for Liverpool Wavertree, was due to speak but because of Covid-19 restrictions will sadly not be able to attend .[3]

Havana, Cuba (CMC)— A proposal to award the 2021 Nobel Peace Prize to a contingent of Cuban doctors who specialise in disaster situations and serious epidemics, has been endorsed by four members of the British Parliament.

According to the official site of the Cuba Solidarity Campaign in the United Kingdom, the four members of the House of Commons – Paula Barker, Ian Byrne, Dan Carden and Kim Johnson, highlighted the humanitarian aid provided by Cuba and the Henry Reeve International Contingent of Doctors.

With the four formal nominations of the legislators, 16 requests submitted by British parliamentarians are accumulated, to which another eight were sent by academics from the United Kingdom.

Nominations for the Nobel Peace Prize have a deadline of January 31 of each year and can only be made by parliamentarians, academics, awardees, judges of international courts, and active or retired members of the Committee.

The Cuban Ministry of Foreign Affairs said that, since its creation in 2005, the Henry Reeve International Contingent of Doctors Specialized in Disaster Situations and Serious Epidemics has saved hundreds of thousands of lives in areas of Africa, Latin America, the Caribbean and Asia, which have been hit by earthquakes, hurricanes, floods and epidemics.[4] 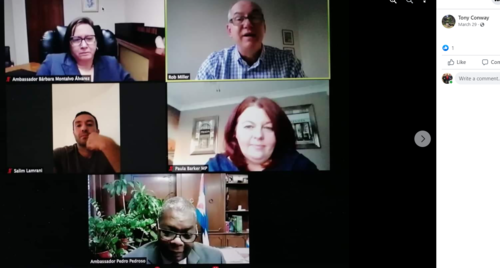 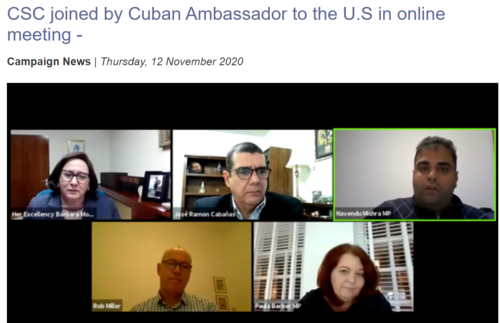 We had a fantastic event on 17 February for the Play for Cuba appeal at El Cuba Libre restaurant in Hyde. We raised over £300, and this was matched by the restaurant who gave us another £300 from a previous event!

All the instruments are now in the process of being itemised and packed ready to be sent off to Cuba from NEU conference. We have had a great response to the appeal in the North West.