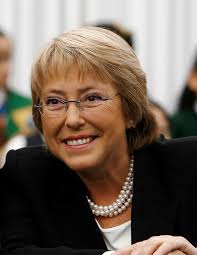 Michelle Bachelet was between March 2006 and March 2010 was the first women to hold the office of President in Chile.

Since September 2010 Michelle Bachelet has been Under-Secretary-General of the United Nations and Executive Director of UN Women, the recently established United Nations entity that promotes gender equality and the empowerment of women.[1]

Michelle Bachelet was born in Santiago de Chile in 1951 as the daughter of an air force general, Alberto Bachelet, and an archaeologist, Angela Jeria, and grew up in various army camps throughout the country. Later, she joined the Socialist Youth Organization and became a committed student leader. She experienced the military coup of September 1973 from the roof of the university's medical faculty. Her father, who refused to disavow Salvador Allende, was tortured and died soon afterwards as a result. In January 1975, the secret service abducted Michelle and her mother to the infamous Villa Grimaldi, where they were brutally interrogated. However, Socialist functionaries succeeded – with the help of foreign governments – in exerting so much pressure on the regime that it allowed Michelle and her mother to leave the country. The two women fled via Australia to East Germany.[2]

The same year saw Bachelet begin studying German in Leipzig. Later, she married the Chilean architect Jorge Dávalos, the father of the two older children, and then continued her medical studies at Humboldt-Universität Berlin. What she cherishes about her stay in Germany was how she was able to open up to an alien society: "I got to know the value of work and efficiency." After four years in Germany, Michelle Bachelet and here family returned to Chile in 1979, where three years later she completed her studies as a surgeon, specializing as a paediatrician.[3]

After Pinochet's fall in 1990, she became actively involved in organizations representing the relatives of the victims of the dictatorship. She worked at the health ministry between 1994 and 1997, until President Lagos finally appointed her as Health Minister in 2000. In 2002 – Bachelet had attended seminars on strategy and security policy in Santiago and Washington in the mid 1990s – she, the socialist daughter of a murdered general, took on responsibility for the Chilean armed forces. Quickly and in the face of many adversities, she "gained their respect and succeeded in decisively shedding light on the human rights violations committed during the dictatorship".[4] 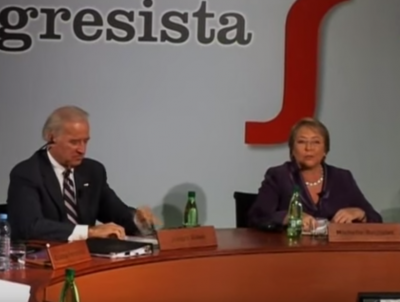 U.S. Vice President Joe Biden was in Chile. April 2009, to attend a summit of leaders from Latin America and Europe.

Biden flew to Chile early Friday and went to the resort city of Vina del Mar, where the Progressive Governance Summit would take place on Saturday. 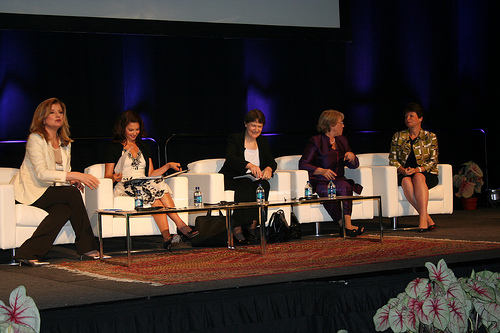 March 2014, amidst a cheering crowd of 5,000 people at the presidential palace in Santiago, Chile, Michelle Bachelet, 62, got sworn in as the president. Meanwhile United States vice president Joe Biden, and presidents and leaders of Latin America looked on.

President Bachelet, a socialist, is the first female president of Chile, but this is her second term as president. Bachelet was also president from 2006-2010. During her time off after 2010, however, Bachelet was not sitting on her hands. By September of the same year, she became the Under-Secretary General and Executive Director for UN Women.

Bachelet's political campaign that got her elected was similar to that of President Barack Obama's, The Washington Times noted. Bachelet's focused much of her attention on the income gap between the rich and the poor, as well as education reform.

Bachelet's "New Majority" coalition also helped get her elected. The New Majority is in fact a programmatic and political agreement among Left parties, and the Center parties such as socialist parties, communist parties, Christian Democratic parties (the biggest party group among them); and Social Democratic parties such as Party for Democracy. More movements that helped Bachelet get elected include the street activists and former student leaders.

Both Obama and Biden openly supported Bachelet's election. The White House released a fact sheet on their website solidifying the United States and Chile's relationship. The White House emphasizes the "long-standing" alliance and close ties that both countries have had. [6]