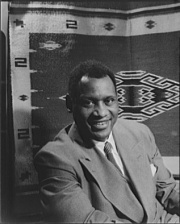 Paul Robeson (1888–1976) was a Communist Party USA (CPUSA) member and influential Communist activist. Many people testified at the House Committee on Un-American Activities (HUAC) hearings in the 1950s and several identified Robeson, under oath, as a secret member of the CPUSA, including Manning Johnson[1].

Robeson was an All-American football player and recipient of a Phi Beta Kappa key at Rutgers University. He received his law degree at Columbia University. Robeson was also an internationally acclaimed concert performer and actor.

In 1950, after a 1949 public statement in which he said that African Americans would not fight in “an imperialist war,” his passport was revoked.

In 2018 South Carolina Progressive Network published a booklet, HISTORY DENIED: Recovering South Carolina's Stolen Past by Becci Robbins. Its content is a substantive introduction to the Southern Negro Youth Congress (SNYC) and the vanguard radical labor organizing among interracial youth in the severely segregated South between 1937 and 1949. Specifically, this tells of a landmark Congress convened in Columbia, South Carolina in October of 1946.

This event had in active participation such Freedom Movement notables as local South Carolina youth leaders in addition to Paul Robeson, Herbert Aptheker, Dorothy Burnham and Louis Burnham, Esther Jackson and James Jackson, Louise Patterson, Sallye Davis, Jack O'Dell, South Carolina's Modjeska Simkins and the Congress' Keynote Speaker, Dr. W.E.B. DuBois, who gave a speech, BEHOLD THE LAND, which "has been a must read' for all young activists ever since".[2]

Paul Robeson was a sponsor of the Scientific and Cultural Conference for World Peace which ran from March 25 - 27, 1949 in New York City. It was arranged by a Communist Party USA front organization known as the National Council of the Arts, Sciences, and Professions. The conference was a follow-up to a similar gathering, the strongly anti-America, pro-Soviet World Congress of Intellectuals which was held in Poland, August 25 - 28, 1948.[3]

The Council on African Affairs, Inc.

The Council on African Affairs, Inc. officers circa 1950;[4]

In the early 1950s, the publication Freedom was published monthly by Freedom Associates, 53 West 125th Street, New York 27, New York. Its editorial board consisted of Paul Robeson, Chairman; Revels Cayton, Shirley Graham, Alphaeus Hunton, Modjeska Simkins, Louis Burnham, and George B. Murphy, Jr. The printer's symbol number 178 which appears on the publication in order to identify the place where it was printed and the local of the printer's union, is also found on virtually every other piece of Communist Party USA propaganda printed in the New York area[5].

Greetings to Paul Robeson at his 75th birthday affairs at Carnegie Hall were listed in the DW of April 26, 1973, P. 12, including:

A major "Youth Salute to Paul Robeson" was held for secret CPUSA leader Paul Robeson at New York City's Felt Forum on December 16, 1978. Participants and supporters included the cream of the CPUSA's Hollywood supporters and related musical entertainers. The CPUSA newspaper the Daily World (DW) of Dec. 19, 1978, in a front page article, "Robeson salute draws 4,600 to Felt Forum", by Richard Hoyen, provided details about the affairs as well as the names of many participants. Another DW photo-article on Dec. 21, 1978, featured key entertainers who performed at this event.

From the 12/18/78 article the following people were mentioned as participants:

Paul Robeson, Sr., who was identified as a member of the CP's "National Committee" in the House Committee on Un-American Activities report "The Structure and Organization of the Communist Party of the United States", Part 1, Hearings, HCUA, 87th Congress, 1st Session, Nov. 20, 21 & 22, 1961, P. 576]

Over the course of many years, the CPUSA and its fronts often made oblique references to Paul Robeson as being a Communist, Marxist-Leninist, etc. because they were not ready to admit to the world that he had lied for decades about his Party membership and allegiance to the Soviet Union.

One of the first of these references to Robeson' true Marxist identity by the CPUSA came in an article in the May 1976 issue of "Young Worker", the "publication of the Young Workers Liberation League (YWLL).

In an article on Page 3 (and continued on P. 5), entitled "Join the Paul Robeson Enrollment" by James Steele, National Chairman, YWLL (and a rising leader of the CPUSA), he wrote:

"On January 24, 1976, the Central Committee of the Young Workers Liberation League issued a statement on the death of Paul Robeson..."

"The Young Workers Liberation League pledges to devote itself to instilling in the young generation the spirit of enthusiasm, confidence, compassion, and the love for humanity which was characteristic of Paul Robeson. The YWLL pledges to mobilize youth to "climb Mt. Paul Robeson" that is to win U.S. youth to Paul Robeson's ideology: Marxism-Leninism, and to his class, the working class, and the Party which Paul Robeson unhesitatingly and uncompromisingly defended as the guardian of that ideology and the revolutionary vanguard of that class: the Communist Party U.S.A."

"We can now say that Paul Robeson was a member of the Communist Party.....During the period of McCarthyism, most of the Party was forced underground. Paul, and other trade union leaders were part of that".

The Paul Robeson 100th Birthday Committee was set by Chicago based socialists, headed by Mark Rogovin, to mark 100th the anniversary of Paul Robeson's birthday in 1998.[9]

Paul Robeson 100th Birthday Committee "With recognition to those who launched this campaign and those who gave guidance and leadership to the Committee’s activities."

City of Chicago, Dept. of Cultural Affairs For their commitment to the Paul Robeson Centennial Campaign and their funding which helped make this publication possible.

Prof. Andrew Pickett The authors gratefully acknowledge his important research for the expanded second edition of this publication.

Cathy Campo For her seemingly unending work over the past 4 years in entering all stages of this document on her computer–handling endless additions and corrections as well as formatting and layout.

Cynthia Van Swearingen For continually scouring the Internet and downloading the FBI Robeson files and other historical references[10].

However, the campaign’s success is not limited to the stamp’s approval. The work that went into the campaign also did much to educate the American people about Robeson’s life.

Mark Rogovin, of the Paul Robeson 100th Birthday Committee, stated, “we had this idea about pushing for the stamp and we obtained contacts from all over the United States in connection with the 100th birthday celebrations…. Many thousands or even tens of thousands of signatures were gathered at Chicago’s DuSable Museum of African American History. Every day, busloads of school children would visit the museum on field trips, learn about Robeson, and sign the petition.

From the "Daily World", April 26, 1973, P. 12, in the article "The people of the world salute Paul Robeson" re the CPUSA's "Salute to Paul Robeson on his 75th Birthday", he wrote the following (presumably from East Germany where he lived).