A son, Dr. William Jarrett, died in 1993. He was married for five years to Valerie Jarrett, who served as senior advisor to U.S. president Barack Obama.

Vernon Jarrett was born in Paris, Tennessee, the youngest son of two western Tennessee schoolteachers. He graduated from Knoxville College in Tennessee. He moved to Chicago in 1946 as part of the Great Migration to the North. On his first day on the job at the Chicago Defender in 1946, he covered a race riot[1].

The following officers and council members were elected at the June 1946 convention of the Communist Party USA youth wing American Youth for Democracy:

In early 1948 Frank Marshall Davis served on the publicity committee of the Citizens' Committee to Aid Packing-House Workers with Vernon Jarrett.

The committee was "organized to support the united packing-House workers of America C.I.O. now on strike"

Oscar C. Brown-later a famous jazz musician under the name Oscar Brown, Jr. was also at the time a Communist Party USA member. He joined in 1946 and was expelled around 1954.

Further down the page was a list of the organization's "Food and groceries committee". Named among them was Ishmael Flory, a leader of the Illinois Communist Party USA from the late 1930s until his death in 2004. 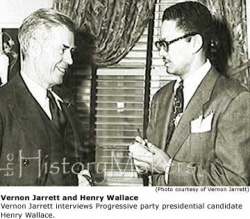 In 1948 Vernon Jarrett left his job as journalist at the Chicago Defender to start a black oriented radio show "Negro Newsfront" with Oscar Brown, Jr.[3].

He also went on to become the Chicago Tribune's first black syndicated columnist and was a founder of the National Association of Black Journalists.

On April 12, 1948, Vernon Jarrett was listed as a member of the Communist Party USA dominated Citizens' Committee to Aid Packing-House Workers which was based in Chicago, Illinois.[4]

In the 1950's Chicago's Du Bois Theater Guild was one of the first groups to stress "Black Awareness" in its theatre philosophy.

Vernon Jarrett became the first black syndicated op-ed columnist for the Chicago Tribune in 1970. Then in 1983, he moved to the Chicago Sun-Times as an op-ed columnist and later became a member of its editorial board, from which he retired in 1995. He was a senior fellow at the Great Cities Institute of the University of Illinois in Chicago, where he created the Freedom Readers, a young reading society.

Jarrett, also spent more than 30 years as a host of a Sunday morning television talk show. His commentaries could also be heard on "The Jarrett Journal" over WVON-AM, Chicago's black-owned radio station. He also hosted TV interview shows for the Chicago public schools' Educator program[6].

He was an on-camera source for two lauded PBS documentaries, "Harry Truman" (1997) and "Eleanor: The Life and Times of Eleanor Roosevelt" (2000). He also was featured in the BBC production of "The Promised Land," which documented the migration of southern blacks northward after World War II.

Vernon Jarrett's journalistic and humanitarian efforts won him numerous awards. In 2000, he was inducted into the International Literary Hall of Fame for Writers of African Descent at the Gwendolyn Brooks Center of Chicago State University. In 2001, the national Academy of Television Arts and Sciences presented him with its Silver Circle Award for his contributions to serious television[7]. 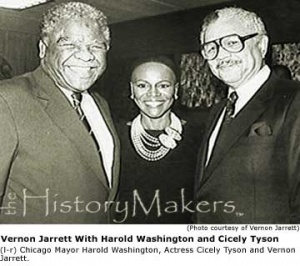 Vernon Jarrett was a key influence in Washington's decision to run for the Chicago mayoralty and remained a key supporter through his four year tenure.

Harold Washington defeated the Daley machine to win the mayoralty backed by a coalition led by Chicago's Communist Party USA and the local branch of Democratic Socialists of America (DSA).

DSA member and socialist historian Paul Buhle, wrote in a 1992 article for the Encyclopedia of the American Left[8];

Communists also gained from long-standing political contacts in the black community. Victories of black mayoral and congressional candidates with decades — old ties to the CP — a short list would include Coleman Young and George Crocket in Detroit, Gus Newport in Berkeley, and somewhat more ambiguously, Harold Washington in Chicago.''

Friend of Alice and Buzz Palmer

At Northwestern University Alice Palmer, in the 1980s, campaigned against the university's investment in South Africa. She was Dean of African American Studies at the university.

When black student athletes protested against their treatment by the university marched on the university principal's office. Palmer enlisted the help of her and Buzz Palmer's friend, journalist Vernon Jarrett to help publicize the event.[9]

Vernon Jarrett was also a fan of Barack Obama. He watched his career from its early stages and became an influential supporter.

In 1992 Obama worked for the ACORN offshoot, Project Vote to register black voters in aid of the Senate Campaign of Carol Moseley Braun-who had strong Communist Party USA ties and was Harold Washington's legislative floor leader.

Obama helped Carol Moseley Braun win her Senate seat, then took it over himself in 2004-backed by the same communist/socialist alliance that had elected Washington and Moseley Braun.

Commenting on the 1992 race, Vernon Jarrett wrote in the Chicago Sun-Times of August 11th 1992;

Good news! Good news! Project Vote, a collectivity of 10 church-based community organizations dedicated to black voter registration, is off and running. Project Vote is increasing its rolls at a 7,000-per-week clip...If Project Vote is to reach its goal of registering 150,000 out of an estimated 400,000 unregistered blacks statewide, "it must average 10,000 rather than 7,000 every week," says Barack Obama, the program's executive director...

Dee Myles, a Chicago based chair of the Education Commission of the Communist Party USA penned a tribute to Vernon Jarrett, for the People's Weekly World of June 5th, 2004.

Readers like me can be extremely selective of the journalists we read habitually... We are selective about the journalists to whom we become insatiably addicted, and once hooked we develop a constructive love affair without the romance...

Such was my experience with Vernon Jarrett, an African American journalist in Chicago who died at the age of 86 on May 23. I became a Vernon Jarrett addict, and I am proud of it!

Jarrett’s claim to fame is that he was a partisan of the cause of African Americans in the broad democratic tradition of Paul Robeson and W.E.B. DuBois...

Dee Myles went on to say;

Jarrett was fanatical about African Americans registering and voting in mass for socially conscious candidates. He championed Harold Washington like a great warrior, and this March, from his hospital bed, wrote an article appealing to Black Chicago to turn out to vote for Barack Obama in the Illinois primaries. Obama astounded everyone with an incredible landslide victory as the progressive, Black candidate for the Democratic Party nomination for the U.S. Senate seat from Illinois. From his sickbed, Vernon Jarrett issued a clarion call, and the people responded.