Template:TOCnestleft Mariah Parker co-founded the Athens Georgia chapter of the progressive Bernie Sanders-aligned Our Revolution. She is a 26-year-old rapper, PhD student and openly queer black woman. Mariah Parker, won an upset victory for Athens, Georgia, county commissioner, in 2018. She ran on a progressive platform that put racial and economic justice center stage, and won by a razor-thin margin of 13 votes.[1] 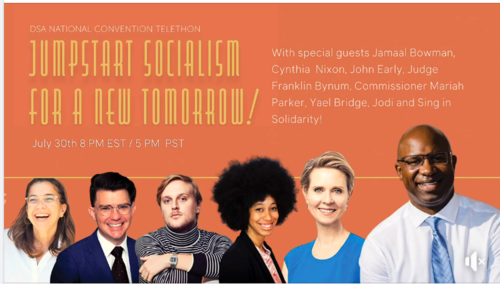 According to Khalid Kamau:

And Georgia had no shortage of reasons to hope. Nabilah Islam — Atlanta’s own AOC, who would later be endorsed by her — was opening the Overton window in Gwinnet, the site of 2018’s closest Congressional election. Devin Barrington Ward, a BYP 100 organizer who helped close Atlanta’s Jail and End Cash Bail in the city, was running for State Senate. In suburban Cobb County, Dr. Elizabeth Webster was running against the Republican author of Georgia’s draconian Forced Birthing (fetal heartbeat) bill. Mokah Jasmine Johnson, an anti-racist activist endorsed by the New Georgia Project Action Fund, was headed to flip a Republican-held State House seat in Athens. There were a half-dozen others like these, and more running for re-election; including DSA members Mariah Parker and Renitta Shannon, who received MADSA’s 2019 Douglass-Debs Award after being drug from the well of the Georgia State House while protesting the Forced Birthing Bill.[2]· 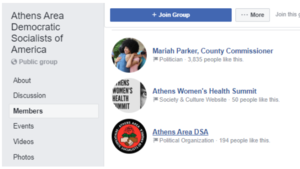 Finding its origins two years ago as a part of commissioner Mariah Parker’s and activist Tommy Valentine’s commission campaigns, Our Revolution’s local chapter officially broke off from the campaigns this June to continue on as a political force in elections to come.

Hosted at co-founder and District 2 Commissioner Mariah Parker’s home, some 12 members met in the living room over bagels and conversation before the meeting kicked off.

With Tommy Valentine and Mariah Parker.