The Labor Caucus is an official caucus in the U.S. House of Representatives. In 2021 members included Jamaal Bowman .[1]

Virtual National Town Hall on the PRO Act featuring US Reps. Katie Porter and Jamaal Bowman, as well as leaders from the Communications Workers of America, the Democratic Socialists of America, the Working Families Party. 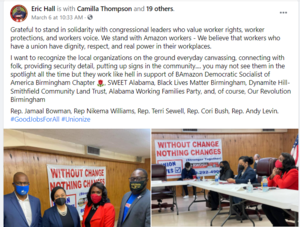 I want to recognize the local organizations on the ground everyday canvassing, connecting with folk, providing security detail, putting up signs in the community.... you may not see them in the spotlight all the time but they work like hell in support of Amazon Democratic Socialist of America Birmingham Chapter 🌹, SWEET Alabama, Black Lives Matter Birmingham, Dynamite Hill-Smithfield Community Land Trust, Alabama Working Families Party, and, of course, Our Revolution Birmingham.

The People's Charter was released by the Working Families Party shortly before the 2020 election.

WFP PEOPLE’S CHARTER LIVE LAUNCH: We know that defeating Trump is a doorway, not a destination. Join us for the live launch of a #PeoplesCharter—a new, ambitious roadmap out of our current crisis, to an America that works for all of us. Featured speakers include Rep. Ayanna Pressley, Rep. Ro Khanna, Rep. Rashida Tlaib, Rep. Jesus Garcia, Jamaal Bowman and Cori Bush. (via act.tv)

Bowman’s primary challenge really began picking up steam when protests against police brutality erupted nationwide. The 44-year-old insurgent ran primarily on Medicare for All, a Green New Deal, and other policies addressing issues of racial and economic justice. Though his focus was on domestic issues, he did criticize Engel over his deference to military contractors and certain foreign policy positions, including his support for the Iraq War. Bowman, who supports defunding the police and repealing the 1994 crime bill (which Engel backed), drew on his own experiences with police violence as a black man and teenager in the Bronx.

Bowman won a surge of endorsements including from neighboring congresswoman Alexandria Ocasio-Cortez, Sens. Bernie Sanders and Elizabeth Warren, the New York Times editorial board, and Rep. Katie Porter of California. He also won endorsements from high-profile progressive groups like the Working Families Party and the Democratic Socialists of America, and Andom Ghebreghiorgis, a fellow local educator who dropped out of the race earlier this month after landing, in that same poll, at 1 percent.

“If successful, Jamaal will be the first candidate elected to Congress from this latest movement uprising for racial justice,” said Waleed Shahid, communications director for Justice Democrats. “He’s assembling the ‘Obama’ coalition in the 2008 primary of people of color, young people, and older white liberals but grounded in a deeply progressive ideology.”[4]

DSA is proud to announce our endorsement of Jamaal Bowman for Congress (NY-16). Born and raised in NYC public housing and rent-controlled apartments, Jamaal grew up in a world that’s been all but eliminated in the age of austerity politics. For twenty years he’s fought and won for teachers, parents, and students. Jamaal currently serves as the founding principle in one of NYC’s best public schools and will fight for equitable investment in schools, to finally pay teachers a living wage, and fund full-time nurses, counselors, social workers in every school.

As a Lower Hudson Democratic Socialists member in Congress, Jamaal will focus on funding schools, healthcare, and jobs instead of bombs and bullets. Jamaal’s election is on June 23rd and you can request your absentee ballot until the end of today if you haven't already.

According to Bernard Cylich from a report made to the Communist Party USA National Board in June 2020:

When I ran into Bowman early this year, just after he had declared his candidacy, I cautioned him about his opponent’s progressive record. However, I also shared with him what I perceived as Engel’s reactionary and potential vulnerabilities—his war hawkishness in general and his unquestioning pro-Israel, anti-Palestinian positions. While acknowledging Engel’s progressive record, Bowman was determined to challenge him on his egregious foreign policies and his failure to attend to the needs of the district. Raised in public housing and educated in the public schools, Bowman was drafted by Justice Democrats, an offshoot of Bernie Sanders’s former campaign staff. The organization, led by a young woman, Alexandra Rojas, was committed to challenging Engel and electing a progressive candidate..

The organization helped Bowman pull together a campaign strategy and a platform, raising funds by soliciting small individual contributions, refusing corporate donations, and reaching out for endorsers. Bowman called for a New Marshall Plan to invest in our cities, the nation’s infrastructure, affordable housing, education, and similar progressive causes; he supports both Medicare for All and the Green New Deal, and wants Congress to create well-paying union jobs, end institutional racism, and overhaul the racist criminal justice system. He has rolled out a New Reconstruction program that includes reparations. When Bowman was interviewed on the radio, the host commented that much of Bowman’s program was socialist. “Well, if that is so, then I guess I am a socialist,” he conceded unapologetically. And after the victorious primary, he admitted that he had joined the DSA a year ago.

Bowman’s challenge to Engel won him endorsements from Bernie Sanders and Alexandria Ocasio-Cortez; thus they rejected Engel even though he had co-sponsored their bills. The soon-to-be member of Congress also won the backing of the Sunrise Movement, which provided his campaign with scores of volunteers and who made over a million phone calls on his behalf. The endorsement of Bowman by the New York Times was a major blow to Engel. The list of Bowman’s individual backers is impressive: they include Senator Elizabeth Warren; State Senators Alessandra Biaggi, Gustave Rivera, and Robert Jackson; NYC Public Advocate Jumaane D. Williams; City Comptroller Scott Stringer; Naomi Klein; and Jessie Ramos. His organizational endorsements included UAW, CSA, NYS Nurses Association, WFP, Move-On, NY Progressives, and Jewish Vote. His campaign raised over a million dollars in small donations. Record numbers of voters turned out on primary day. Overall, Bowman defeated Engel 55.38% to 40.55%, a 15% spread.[5]

Jamaal Bowman has been a teacher, guidance counselor, dean, and, for the last decade, the founding principal of a well-regarded middle school in the Bronx.

Now, he wants to add a line to his resume: Congressman.

Though the odds may seem long, Bowman has the backing of the Justice Democrats, who are hoping for another upset after successfully supporting Rep. Alexandria Ocasio-Cortez’s insurgent bid for office.

Bowman is counting, in part, on his 20 years of experience in education to appeal to voters. Long before throwing his hat in the political rink, Bowman started The Cornerstone Academy for Social Action, or CASA, a middle school that has produced notable academic results despite serving mostly disadvantaged students.

He has been a vocal supporter of the opt-out movement boycotting state testing, especially within the black community. Bowman has also pushed for discipline reform, favoring restorative practices such as mediation in his school, rather than suspensions, which are disproportionately meted out, city data shows, to students of color. He’s also a big believer in the importance high-quality, early childhood care and education. A favorite word of Bowman is ‘holistic’ — an approach he likes to see in schools and one he’d like to see in government.[6]

In 2020 Jamaal Bowman was a Brand New Congress endorsed candidate for US Congress in New York.

The bill establishes annual certification and reporting obligations on the Secretary of State to show that no U.S. funds have been used by the Israeli government to support the prohibited activities included in the legislation. The McCollum bill also requires oversight reporting detailing the Israeli government’s human rights violations against Palestinians.