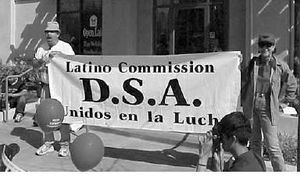 For Duane Campbell, for Al Rojas, Dolores Delgado Campbell and others in the Democratic Socialists of America Latino Commission , the Cesar Chavez's United Farm Workers was a school for organizing.[1]

Like hundreds of activists in labor and community organizations today, we were trained in the union. This cadre of organizers is the UFW's second legacy.

In 1990, Duane Campbell, from Sacramento and Mary Dunn, from Lexington Kentucky, were contacts for the Democratic Socialists of America Latino-African-American and Anti-Racism Commission. [2]

On June 24 1993, in Mexico City, DSA Latino Commission leaders Dolores Delgado Campbell and Duane Campbell met with Cuahtemoc Cardenas, PRD candidate for President of Mexico in 1994. They planned a conference to be called"NAFTA and Human Rights in Mexico," which would be held at California State University at Sacramento on October 20 and 21. [5]