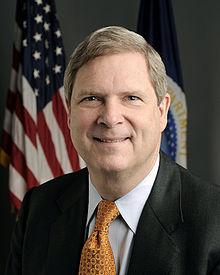 Thomas James "Tom" Vilsack is a member of the Democratic Party and currently the U.S. Secretary of Agriculture. He served as the 40th Governor of the state of Iowa. He was first elected in 1998 and re‑elected to a second four-year term in 2002. On November 30, 2006, he formally launched his candidacy for the Democratic Party's nomination for President of the United States in the 2008 election, but ended his bid on February 23, 2007.[1]

Tom Vilsack was born December 13, 1950 in Pittsburgh, Pennsylvania. He was abandoned at birth and placed in a Roman Catholic orphanage. He was adopted in 1951 by Bud and Dolly Vilsack. Bud Vilsack was a real-estate agent and insurance salesman, and Dolly was a homemaker.

Vilsack met his future wife, Ann Christine "Christie" Bell, in a cafeteria while at college in New York in October of 1968. Vilsack approached Bell and asked, "Are you a Humphrey or a Nixon supporter?" She replied "Humphrey" and they soon began dating. The couple was married on August 18, 1973, in Bell's hometown of Mount Pleasant, Iowa. Vilsack and his wife moved to Mount Pleasant in 1975, where he joined his father-in-law in law practice.

Tom and Christie Vilsack have two sons, Jess and Doug. Jess graduated from Hamilton College in 2000 where he, like his father, was a member of the Delta Upsilon Fraternity. Jess received a J.D. from the University of Iowa in May 2003. Doug later graduated from Colorado College and is currently attending the University of Colorado School of Law. He is also a research associate at the School of Law's Energy and Environmental Security Initiative (EESI).

On May 1, 2006, it was announced that Vilsack joined the Board of Directors of Pittsburgh-based Carnegie Learning, a leading publisher of research-based math curricula for middle school, high school and post secondary students.

He received a Bachelor's Degree in 1972 from Hamilton College in New York. While at Hamilton, he joined the Delta Upsilon Fraternity. He received a Juris Doctor (J.D.) in 1975 from Albany Law School.

Vilsack was elected mayor of Mount Pleasant in 1987. He was elected to the Iowa Senate in 1992.[2] Following election, he worked on legislation requiring companies who received state tax incentives to provide better pay and benefits. He helped pass a law for workers to receive health coverage when changing jobs and helped re-design Iowa's Workforce Development Department. He also wrote a bill to have the State of Iowa assume a 50% share of local county mental health costs.

In 1998, Terry Branstad chose not to seek re-election following sixteen consecutive years as governor. The Iowa Republican Party nominated Jim Ross Lightfoot, a recent former U.S. House Representative. Lightfoot became the odds-on favorite to succeed Branstad. Vilsack defeated former Iowa Supreme Court Justice Mark McCormick in the Democratic primary. Vilsack chose Sally Pederson as his running mate. He narrowly won the general election and became the first Democrat to serve as governor of Iowa in 30 years and only the fifth Democrat to hold the office in the 20th century.

In 2001, Vilsack served as a Chair of the Midwestern Governors Association. In 2002, he won his second term in office by defeating Republican challenger attorney Doug Gross by eight points. In 2002, he named Stephen Gleason as his Chief of Staff. Gleason resigned in 2005 to pursue a career in medical consulting at Health Policy Strategies in Milwaukee, Wisconsin. He was replaced by Cynthia Eisenhauer, former Director of the Iowa Department of Management and Iowa Workforce Development.[3]

The first year of his second term witnessed the creation of the Grow Iowa Values Fund, a $503 million appropriation designed to boost the Iowa economy by offering grants to corporations and initiatives pledged to create higher income jobs. Vilsack used a line-item veto, later ruled unconstitutional by the Iowa Supreme Court, to pass the fund, vetoing portions of the bill that would have cut income taxes and eased business regulations. After a special session of the Iowa General Assembly on September 7, 2004, $100 million in state money was set aside to honor previously made commitments. The Grow Iowa Values Fund was reinstated at the end of the 2005 session. Under the current law, $50 million per year will be set aside over the next ten years.

Candidates seeking to replace Vilsack, most notably Ed Fallon, criticized the Grow Iowa Values Fund. Their complaints included the fact that companies lured into Iowa by the fund, unlike Iowa-based corporations, can be lured away by greater cash incentives elsewhere. Another criticism is that it does nothing to promote new business.

In July of 2005, Vilsack signed an executive order allowing all felons who had served their sentences to vote again. Iowa law previously held that convicted felons are permanently disenfranchized unless voting rights were restored personally by the governor; Vilsack did away with this process. For most of Vilsack's tenure as Governor, Republicans held effective majorities in the Iowa General Assembly. Following the November 2, 2004, elections, the fifty-member Senate was evenly split between Democrats and Republicans. Republicans held a 51–49 majority in the House of Representatives.

During the 2005 legislative session, Vilsack signed into law greater restrictions that require products containing the active ingredient pseudoephedrine to be sold behind pharmacy counters, as opposed to open-access at open-shelf level. Those wishing to buy such products must show identification and sign a log book. The new law, designed to reduce methamphetamine use in Iowa, took effect on May 21, 2005. Following Kelo v. City of New London, Vilsack vetoed, but was overridden on Iowa House file 2351, a bill to restrict Iowa's use of eminent domain.

I am particularly troubled with the provisions that restrict the use of eminent domain for redevelopment purposes to areas defined as slum or blighted. -- Tom Vilsack, veto letter for Iowa House file 2351.

Prior to Democratic Presidential candidate Senator John Kerry's selection of Senator John Edwards, Vilsack was thought to be high on the list of potential running mates for Kerry in the 2004 presidential election. In 2005, Vilsack established Heartland PAC, a political action committee aimed at electing Democratic Governors. In the first report, he raised over half a million dollars. Vilsack left office in 2007; he did not seek a third term and was succeeded by Chet Culver.

In each election cycle, we endorse a diverse array of candidates who exemplify our values and show unusual promise to advance our progressive goals. We invest in some of the most competitive races as well as in some of the most challenging – those in which the candidates are outstanding but the traditional Democratic supporters are most reticent. We back candidates in primaries as well as general election races, and we focus the bulk of our resources on electing challengers and protecting vulnerable incumbents.[5]

Humphrey was endorsed by 21st Century Democrats in his 1998 Governor's race.[6]

A Cuban delegation headed by Agriculture Minister Gustavo Rodriguez will visit the United States on June 1-3, 2016, at the invitation of the Secretary of Agriculture, Thomas Vilsack, the Cuba Minrex website reported.

In Washington, the Cuban minister will meet with executives of the Departments of Agriculture and Commerce, as well as with representatives of organisations supporting the lifting of the blockade and the normalisation of relations with Cuba.

From the U.S. capital, the Cuban delegation will travel to the state of Iowa, where it will visit production and agricultural research centers, accompanied by Secretary Vilsack.

This visit will boost cooperation, as reflected in the Memorandum of Understanding signed in March, in areas such as scientific exchanges on animal and plant health, organic production, research related to the recovery of agricultural land, the conservation management of soils and forests, and agricultural irrigation, among others.

"Access to foreign markets and fair trade policies that benefit American workers are necessary components that will help Alabama exporters to continue to thrive and spur new job creation. President Obama took historic steps to chart a new course for U.S.-Cuba relations when he restored diplomatic relations between our two countries. This will undoubtedly serve as a catalyst for increased trade and investment opportunities in Cuba for Alabama businesses, especially those in our agriculture sector."

Senator Jeff Merkley of Oregon, Representative Suzan DelBene of Washington, and Representative Kurt Schrader of Oregon are participating in the Cuba trip. The Congressional delegation is leaving Washington, D.C. on Wednesday and will return on Saturday.[8]

In January 2009, Vilsack was nominated by the Obama administration for the position of Secretary in the Department of Agriculture and confirmed in January 2009.[9]

Vilsack was on the list of 153 speakers at the 2006 Take Back America conference, which was organized by the Institute for Policy Studies, and Democratic Socialists of America dominated Campaign for America's Future.[10]