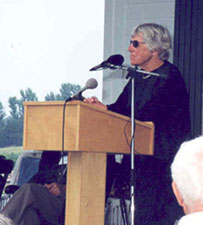 Ruth Salzman Adams an arms-control activist and a former longtime editor of The Bulletin of the Atomic Scientists, who devoted most of her life to ensuring that a broad array of scientists and scholars focused on solutions for world peace, died in February 2005 of cancer at her La Jolla home. She was 81.

"She was very interested in nuclear weapons, but also understood that the issues of poverty and development in Third World countries were as much a part of people's sense of security ... or insecurity as nuclear weapons are in the developed world," said Kennette Benedict, who succeeded Adams as director of the international peace and security program of the John D. and Catherine T. MacArthur Foundation in Chicago[1].

She was survived by her husband of 51 years, Robert McC. Adams, daughters Gail Lorien, Beth Skinner, and Megan Adams.

Adams was born in Los Angeles, July 25, 1923, the older of two children. She grew up in mining camps in Nevada because of her father, a mining engineer, who, she once told the Washington Post, "was always looking for a pot of gold and never found it." He abandoned the family when she was quite young. Her mother supported Adams and her sister by becoming a rural visiting nurse in Minnesota[2].

She first entered the labor force in 1942 as recreation director in a wartime Oregon shipyard (and was terminated after organizing an interracial dance[3].

Bulletin for the Atomic Scientists

Ruth Adams became assistant editor of the Bulletin of the Atomic Scientists in 1953 and worked closely with the editor, Eugene Rabinowitch.

Adams was an early participant in the Pugwash peace movement, which brought together American and Soviet scientists concerned about the nuclear threat. She was the only woman present in 1957 at the first Pugwash conference in Nova Scotia, sponsored by such eminent scientists as Albert Einstein and Linus Pauling.[4]

"She was as knowledgeable as many of the Pugwash participants, even though she was not a scientist," said Victor Rabinowitch, a friend of 50 years and chairman of Bulletin of the Atomic Scientists. "She really believed in the importance of scientists in political roles. She held that view until her death -- that scientists had a unique responsibility to inform the public about the dangers of nuclear war."

In the later decades of the Cold War she "frequently had a facilitating role in maintaining the flow of policy-oriented communication and understanding on nuclear issues between senior Western and Soviet scientists".[5]

From a Jan/Feb 1996 Peace Magazine interview with Metta Spencer[6];

RUTH ADAMS: Pugwash kept alive a spirit of international community in nations where freedom to move was not easily achieved. There was a conception that reason could be relied upon--an understanding that they were scientists, no matter where they lived. During the Cold War that was an important spirit to keep alive.

There were many wonderful Russian scientists. I remember Topchiev, who was the vice-president of the academy and a very courageous man. And Igor Tamm, a physicist who was a mountain climber. Artsimovich, who was fascinated by history, art, and poetry.

METTA SPENCER: Joe Rotblat speaks of the influence of Artsimovich and Millionshchikov in shaping Soviet anti-ballistic missile policy. Andrei Sakharov's memoirs do not indicate that he realized that he had allies among his fellow scientists--people who thought as he did. For example, he didn't identify with Artsimovich or Millionshchikov.

ADAMS: Sakharov was an angry man. I remember his early article about destroying enemies which shocked the world. I think he must have considered Pugwash to be a compromise group.

SPENCER: Apparently he did go to one Pugwash meeting late in life.

ADAMS: But he was strictly a loner. SPENCER: Yes. He was courageous, but I think he did a lot of damage politically by leading the parliamentary opposition against Gorbachev at a time when Gorbachev really needed support. I spoke with [Academician] Goldansky about it and he said that Sakharov's political tactics were not well considered.

Anyway, do you know whether any Pugwash peaceniks from the West influenced the Soviet decision to accept the zero option as a way of getting an INF treaty?

ADAMS: Who do you think the peaceniks were in Pugwash?

SPENCER: All of Pugwash.

ADAMS: They really weren't. Pugwash people had very diverse views. Some were using the rhetoric of the Cold War, and the need to buy the Cold War culture, in order to find some way out of the mess. But arms control was not disarmament; it was not a repudiation of nuclear weapons; it was a way of making them more acceptable because they could be controlled a bit. It was never a solution to a nuclear world. It was never an easy, peaceful situation, nor were Pugwash people necessarily peaceniks--though Joe certainly was. We could contrast Pugwash to Randy Forsberg, whose efforts had an enormous impact in the United States--quite a different impact than Pugwash. Pugwash always tried to work through the official government negotiators, if you will, and to influence them.

At the beginning they were right because probably nobody would have listened to them. And by the end of the Cold War there were people in all countries who had been influenced.

The arms control struggle (that is, the negotiations over such questions as: Are we going to go down to this level? What is non-provocative defence?) had a life of its own; it became a culture. It was not a very satisfactory culture to people who wanted to see the world approach better understanding, disarmament, conflict resolution. And the real spirit of Pugwash wasn't actually recognized until the Cold War was over and you had people able to come forward to mobilize for peace. They haven't been successful, but I think the understanding of what is necessary to have a peaceful world is better now than it has ever been.

SPENCER: Do you remember specific debates between the arms controller and the disarmament wings? ADAMS: In the West, some people were for general and complete disarmament. But if you used that term, you were a tool of the communists. I remember Leo Szilard, in his effort to set up the Council for a Livable World, was careful not to use that term so as to keep credibility with arms controllers.

In 1962 Adams served on the Advisory Council of the Hyde Park Community Peace Centre, with Sidney Lens and Quentin Young.[7]

Chicago Committee to Defend the Bill of Rights

In November 1967, Ruth Adams signed a Chicago Committee to Defend the Bill of Rights advertisement in the Hyde Park-Kenwood Voices opposing efforts by Senator Dirksen to re-institute the McCarran Subversive Activities Control Act of 1950.[8]

As at 1982, Ruth Adams served on the board of the Council for a Livable World as a Director for Nuclear Non-Proliferation. The Council was founded in 1962 by nuclear physicist Leo Szilard and other scientists. Its purpose is to campaign against the proliferation of nuclear weapons through lobbying and by supporting candidates who share their vision.[9]

Bulletin of the Atomic Scientists

As at April 1984, Ruth Adams served as Editor on the staff of The Bulletin of the Atomic Scientists journal.[11]

Ruth Adams was Chair of the Institute for Policy Studies.

Adams was a Fellow, American Academy of Arts and Sciences, her edited and co-edited books include works on human migrations, the anti-ballistic missile, and contemporary China. At the time of her death she was a Board member, Trust for Mutual Understanding and the Maki Foundation; and a course director and consultant to the Italian School on Disarmament and Research on Conflict (ISODARCO). Formerly she had been Program Director for Peace and International Cooperation of the John D. and Catherine T, MacArthur Foundation; and prior to that Editor, Bulletin of the Atomic Scientists[12].

Ruth Adams was a former Trustee, Rocky Mountain Institute, former Board member, Council for a Livable World, former Council member, Federation of American Scientists, former Executive Director or the Illinois American Civil Liberties Union, former Organizing Committee and Governing Board member of the International Centre for Insect Physiology and Ecology in Nairobi, Kenya, former Visiting Scholar, Institute on Global Conflict and Cooperation, University of California, San Diego; former Board member, Women's National Forum, the Chicago Network. Her numerous awards include the Public Service Award of the Federation of American Scientists, the Adlai Stevenson Award for International Human Understanding of the United Nations Association, and the Forum on Physics and Society Award of the American Physical Society[13].